Even in a year without releasing an album, Travis Scott still put numbers on the boards with over four billion Spotify streams, which is comparable to Eminem’s entire discography — and Slim Shady added two projects to his discography in 2020.

Houston’s rager spent most of the year injecting his brand with partnership steroids to make it the strongest in all of Hip Hop and companies are rushing to his doorstep launching million-dollar pitches at him as rampant as James Harden’s three-pointers.

With the coronavirus pandemic forcing artists to improvise and find revenue streams other than the usual live appearances and touring, Scott’s pivot to the branding and product side has proved to be a lucrative one. Covering Forbes’ 30 Under 30 issue, a source claims La Flame pulled in north of $100 million in 2020 through corporate partnerships and branded merchandise.

Much like Michael Jordan transcended basketball or what his mentor Kanye West accomplished in the 2010s, everything Scott touches at the moment turns into a fountain of “cool.” Whether it’s his Nike-branded sneakers going for thousands on resale sites, selling out a McNugget-shaped body pillow or a pandemic-approved Cactus Jack hand sanitizer, La Flame’s Gen Z ragers are always ready to swipe their parents’ credit cards at whatever he has to offer next.

Once Mattel got wind the 28-year-old maestro was using his love of cars as part of the aesthetic for his Cactus Jack compilation album, they rushed to team up and roll out a limited-edition Hot Wheels car in January that was a replica of the one seen on the JACKBOYS cover, which debuted atop the first Billboard 200 chart of 2020.

There are a lot of rappers out there who play video games for fun, but many haven’t figured out how to monetize it. Scott executed his vision at the onset of quarantine and became a trailblazer in the video game space with his unique Fortnite experience. The 10-minute concert drew over 12 million fans on Twitch for Epic Games in April and currently sits at well above 100 million views on YouTube.

On the music side, Trav didn’t let up in the accolades department. In May, Scott reunited with one of his heroes Kid Cudi for “THE SCOTTS,” leading Cudi to his first Billboard Hot 100 No. 1 in his career. Scott unleashed an array of merchandise to complement the release and both of the ragers’ fan bases made sure the collab notched a lofty chart debut.

Scott continued his foray into the video game space by coming on board with SONY as a creative partner in the PlayStation 5 rollout. Scott reportedly netted $1 million in the deal, which saw him voiceover a commercial and receive a console early before the general public, but Forbes expects the multi-year contract to be ultimately worth upwards of $20 million with a “co-branded console” and possible “Travis Scott video game” in the future.

Scott’s landmark partnership with McDonald’s in September proved he moved the needle on a mainstream level. La Flame was given a commercial that was seemingly on a loop along with his own Travis Scott Meal, which caused supply shortages at some restaurants.

It was the first deal of its kind with the Golden Arches since they teamed with Michael Jordan for the McJordan burger in 1992. Estimates say the Houston native took $5 million from McDonald’s and another $15 million in Mickey Dee’s-branded merch sales.

With Scott’s third Hot 100 No. 1 in less than a calendar year, he became the fastest artist to reach the summit with three chart-toppers in Billboard history when “FRANCHISE” featuring Young Thug and M.I.A. went No. 1 in October.

Trav’s diehard fanbase came through for him once again. Even though most are too young to own a CD or cassette player, 58,000 CDs and cassettes were tallied in the first week to help vault “FRANCHISE” to the top.

Scott finished off 2020 by flipping into “Ad-Stroworld,” as journalist Trey Alston put it, with numerous partnerships down the stretch. After weirdly forcing himself in the Jeezy-Gucci Mane Verzuz battle with a merch t-shirt for sale, which still makes no sense a month later, Scott took a hint from the mother of his child and cosmetic queen Kylie Jenner to launch his Space Rage scent with Swedish fragrance house Byredo. The $95 scented candle and $285 perfume both sold out.

Scott’s most recent investment could prove to be his most lucrative of all. Scott threw his name in the spiked seltzer game with the launch of his CACTI hard seltzer line on December 17, which could become the go-to drink for college day drinks across the country next spring.

With Scott upping the ante on the business side, is it possible he’s rap’s next billionaire? The Houston native seems to be a product of those around him and he’s learned from two of the best in seeing the empires of Jenner and Kanye.

Both Jenner and Ye were dubbed the highest-paid celebs of 2020 by Forbes and with Scott entering the fragrance space and following in Kanye’s footsteps at Nike in less controversial fashion, it looks like he’s learned from watching the brilliance displayed from those in his corner.

Regardless, the only way all of these business endeavors reach their maximum potential is if Scott remains atop rap’s zeitgeist and continues to decorate a Hall of Fame résumé with music capital. La Flame is full-speed ahead toward the world of Utopia in 2021 when he’ll attempt to create another Shangri-La type of experience for fans as expectations are sky-high going on three years since his cosmic Astroworld album. 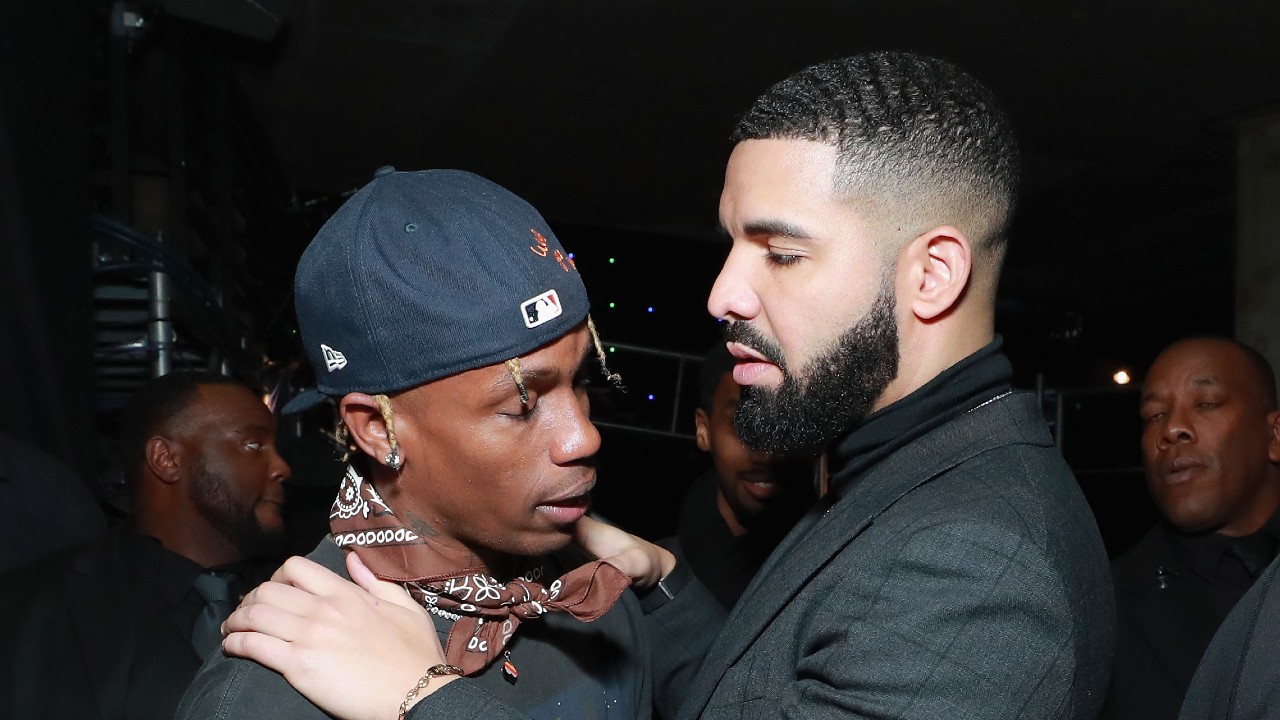 Scott’s sound isn’t as avant-garde since the days Rodeo punctured the 2015 rap landscape — imitators and biters are now walking all around rap with Trav becoming a heliocentric figure in the genre. Utopia will prove to be the most pivotal album of Scott’s career from a legacy standpoint and he knows what’s at stake.

One carrot being dangled in front of him is the allure of finally winning a Grammy Award. He’s been nominated the past five years (six if you include his contribution to Justin Bieber’s Purpose) but has yet to take home the elusive trophy. Scott’s live reaction of disappointment was documented during his Look Mom I Can Fly Netflix special after Astroworld lost out to Cardi B’s Invasion of Privacy debut in 2019.

“Making the best music is important,” Scott told Billboard in 2019 of how important the Grammy’s are to him and his career’s outlook. “It’s always dope to be noticed for your work, but you always just have to remember that as long as you’re making the best music, touching fans and moving spirits, that’s what we all do it for.”

While the world remains inside awaiting society’s return to normalcy, Scott’s next album provides a blissful light at the end of the tunnel.