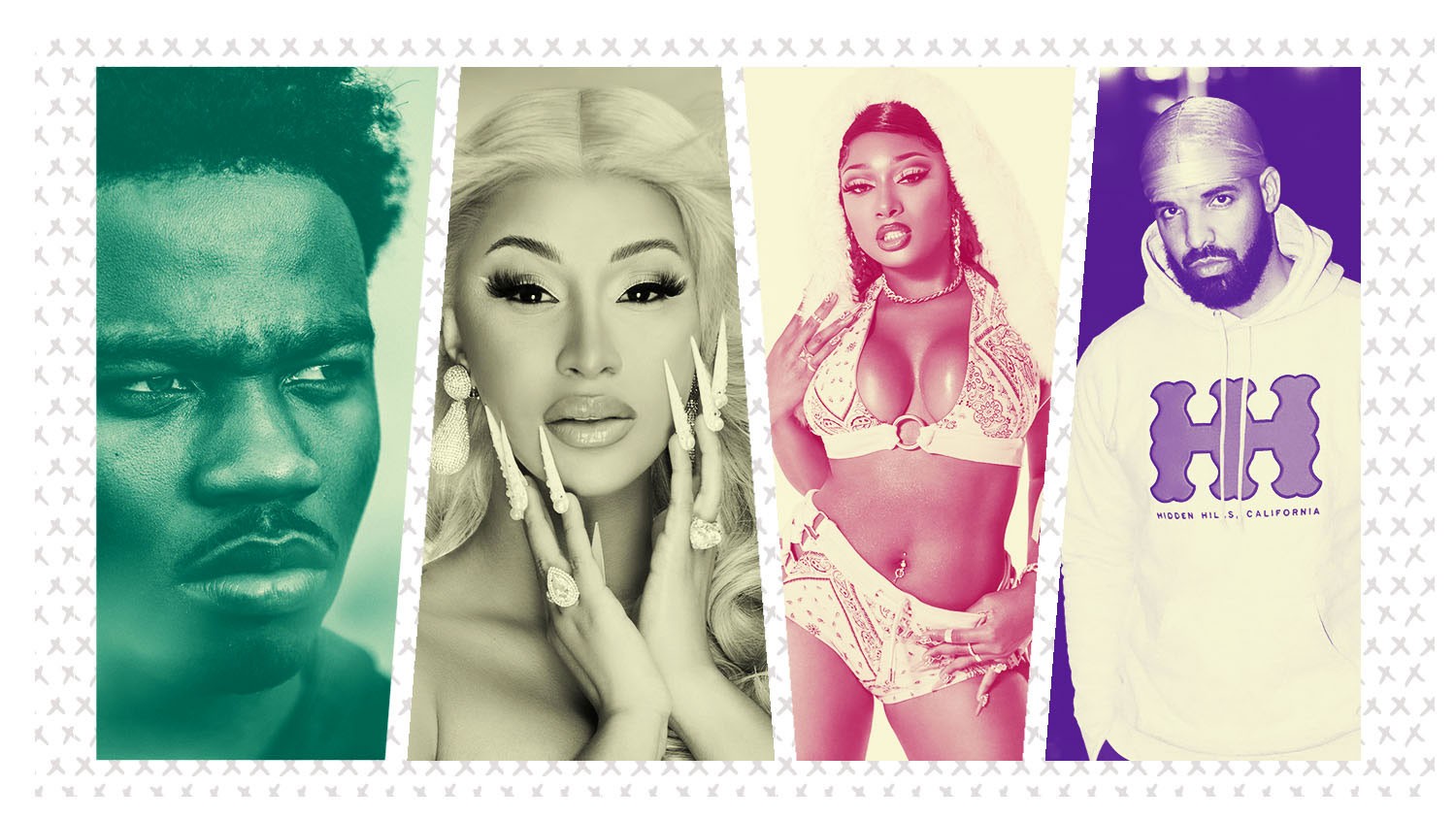 Three generations of rappers — Nas, Big Sean and Don Toliver — band together on the sparkling synth and hi-hat-driven standout from Nas’ King’s Disease album. They teach a crucial lesson to any woman who tries to replace them, but the MCs ultimately learn how much they’d feel incomplete without the Nina Mosely to their Darius Lovehall. – HERAN MAMO

In 2019, Mulatto graduated to stardom when she entered the chat with her titillating single “Bitch From Da Souf.” The following year, she became a rap dynamo when she partnered up with the Godfather of ATL, Gucci Mane, for “Muwop.” Reimagining Gucci’s 2006 hit “Freaky Gurl,” Big Latto is a drama-setter who passes the freak-a-leek test with flying colors. Her raunchiness not only receives a high-five from Guwop, but solidifies her place as one of hip-hop’s rising prospects of 2020. – CARL LAMARRE

Individually, all components of the three-headed monster that make up the Buffalo-born group Griselda had a big year. And when the trio gets together — as they frequently do on one another’s albums — it’s often can’t-miss entertainment. On “War Paint,” Benny and Conway trade punches on powerhouse verses that brim with well-earned confidence (“I’m at the Roc Nation party smelling like chronic smoke/Hov said, ‘You that boy,’ I get acknowledged by the GOAT,” Conway raps), while Westside Gunn ties the Hit-Boy-produced gem together with a pace-shifting hook. It’s a feat in and of itself that they manage to keep it all sounding so fresh amid the torrid recording pace. – JOSH GLICKSMAN

Uzi was crazy for this one: previewing the most anticipated hip-hop release with a flip of Backstreet Boys’ “I Want It That Way,” and having both the conviction and pop smarts to pull it off? “That Way” reminded us that there were few things off-limits in Lil Uzi Vert’s musical universe, as he somehow turned an undying boy band smash into a melodic rap anthem that’s hard not to hum along to. – JASON LIPSHUTZ

Part of the reason Lil Baby became so dominant in 2020 was because he could do it all: there was the calls for social justice on “The Bigger Picture,” the reveling in luxury on the 42 Dugg team-up “We Paid,” and then there was “Emotionally Scarred,” a deep dive into his pre-fame hardships told with stark descriptions and a range of emotion. As one of the standouts on February’s My Turn, the track showcased what Lil Baby would be capable of throughout the rest of the year. – J.L.

City Girls proved why “P—y Talk” was the most expensive and challenging conversation for any male prospect when encountering a woman in 2020: If your bank account wasn’t fluent in designer bags, then you were better off tempering your expectations. On the snapping single, JT and Yung Miami dish out a masterclass on what you need to ace the program — and even Doja Cat takes a break from her popish escapades to serve as a guest lecturer on the spicy anthem. – C.L.

Don’t let the easygoing, piano-driven production from The Alchemist fool you — there’s little that’s lighthearted about these bars. “The revolution is the genocide,” opens Gibbs bluntly, a sentiment that he repeats three more times over the course of his verse. And for his part, Rozay — who feels tailor-made for the beat — offers a poignant tribute to the late Kobe and Gigi Bryant while reflecting on his own mortality. Both rap vets toss in a few lines of lust, but the track shines brightest at its most introspective. – J.G.

Tough 2020 for J. Cole, whose biggest moment of the year came with this gently scalding Noname answer to his hectoring song-long subtweet “Snow on Tha Bluff.” The latter wisely responded by grabbing the always-on-time producer Madlib and whipping up this two-days-later eye roll at Jermaine and the patriarchal culture that emboldened him. “He really ’bout to write about me when the world is in smokes?” Noname wonders. “It’s trans women being murdered and this is all he can offer?” Good questions, and all Madlib’s sturdy, supportive beat can do is shrug, as producer and rapper realize this isn’t worth spending more than 70 seconds on anyway. – ANDREW UNTERBERGER

Big Sean felt “the world needs to hear n feel Nipsey [Hussle’s] presence” when he released the rapper’s posthumous collaboration from the first MC’s Detroit 2 album. Neighborhood Nip and Sean Don reflect on how the streets that raised and praised them still can’t provide them refuge, while Sean recalls linking back up with another legend, Kendrick Lamar, to squash their past beef. Hit-Boy, Rogét Chahayed, Audio Anthem and G. Ry produced the heavy anthem, earning the two rappers a Grammy nod for best rap performance. – H.M.

It’s painful and heartbreaking to hear Killer Mike rap, “You so numb you watch the cops choke out a man like me/ Until my voice goes from a shriek to whisper, ‘I can’t breathe,’” knowing that the song’s release came barely a week after the police killing of George Floyd. And it’s infuriating to know that the song was recorded before that event even occurred — per Killer Mike, the verse was recorded last November, in reference to the death of Eric Garner. Still, perhaps better than any other song on RTJ4, “walking in the snow” showcases why the industry desperately needs two voices like Killer Mike and El-P making music in this moment. – J.G.

For back-to-back summers, Chris Brown had his finger on the dial. After “No Guidance” ran the mainstream circuit in 2019, Breezy lapped his foes a year later with another sugary earworm. “Go Crazy” is a light-hearted bop anchored by CB’s spirited hook and Thugger’s slinky delivery. Who can forget the “Go Crazy” Challenge, which spawned fun Instagram challenges during the start of the COVID-19 pandemic?  The bigger question is, can Breezy notch a three-peat in 2021? – C.L.

Though his success carries the risk of bringing Jack Harlow to the place of either trying too hard, or not trying nearly hard enough, this year he gave us the gift of a perfect rap radio single that tried the exact right amount. “Whats Poppin” was one of the most sheerly enjoyable songs of 2020, a single whose prancing JetsonMade beat was matched in friskiness by Harlow’s limber vocal, a rapper in his ideal pocket providing an entire SportsCenter Top 10’s worth of uncomplicated highlights all by his lonesome. The remix was good, the follow-up single was fine, hopefully his album will be solid. But what’s poppin’ with Jack Harlow may never be quite this simple and joyful again. –– A.U.

After “Toosie Slide” proved to be something of a miss for Drake — as much as a single that debuts atop the Hot 100 could possibly be considered a “miss,” anyway — Drake hedged his bets with the kind of single he knew we couldn’t resist. There’s the brain-sticking faux-horn hook, the checklist chorus (druggy sex, hushed haters, abandoned hometowns), and the meme-factory music video where Aubrey does everything but clip the gifs for you. (Plus Lil Durk, whose guest verse Drake flashes for just eight measures, like a glint of silver in his holster.) Naturally, it worked: Certified Lover Boy might’ve gotten pushed to early 2021, but radio will still probably be playing “Laugh Now Cry Later” every hour on the hour until then. – A.U.

“Oh, you ain’t know I could sing?” Pop Smoke asks in the intro to the rhythmic sex jam “Mood Swings,” another collaboration with Lil Tjay for the posthumous album Shoot For The Stars Aim For The Moon after a pair of them on Meet The Woo 2. He does more than just sing on the track, name-checking French couture companies and Egyptian queen Nefertiti in between lines describing foreplay in vivid detail, enrapturing young lovers across the country all summer long – J.L.

“Life is Good” felt destined to explode from the first listen. With many looking for any sort of post-holidays pick-me-up, the Jan. 10 collaboration from Future and Drake served as a belated gift. The hitmakers clearly put plenty of thought into crafting the song’s success, too: its music video, filled with short skits of the rappers busy at working-class gigs, arrived in tandem with the single; it employed a similar mid-song production-shifting strategy to 2018 Hot 100 topper “Sicko Mode”; and, of course, it included a few Drake lyrics that could double as stellar Instagram captions (“Wine by the glass, your man a cheapskate, huh?”). And the formula didn’t disappoint — it debuted at No. 2 on the Hot 100 and spent its first eight weeks on the chart firmly locked in that slot. Life is good, indeed. – J.G.

At the beginning of 2020, the idea of looking to Lil Baby for wisdom and comfort in a time of national crisis might’ve seemed pretty close to the old Chappelle bit about Ja Rule calling into TRL to offer his thoughts on 9/11. But the artist born Dominique Armani Jones quieted all punchlines with “The Bigger Picture,” a protest song of incredible strength and sensitivity that matched the pain and confusion of its time, while also zooming out to take the widescreen view its title implies: “It’s bigger than black and white/ It’s a problem with the whole way of life/ It can’t change overnight/ But it’s gotta start somewhere…” The blockbuster success of 2020’s My Turn established Lil Baby as one of the biggest artists of his generation, but his ability to meet the moment on “The Bigger Picture” confirmed he was one of its leading voices, too. – A.U.

Houston bred both Megan Thee Stallion and Beyoncé, and the dynamic duo fed its beloved hometown with a robust anthem — and more literally, with tons of food, as part of the song’s COVID-19 charitable component. Queen Bey hopped on the Stallion’s “Savage” armed with buzzing pop culture references, from “Demon Time” to TikTok to OnlyFans, while the remix continues riding on the coattails of its championing hook “I’m a savage/ classy, bougie, ratchet.” Her high-profile feature gave way to Megan’s coronation, both atop the Hot 100 throne and the rap game overall. – H.M.

Lady Gaga, Justin Bieber, Doja Cat and Megan Thee Stallion all had No. 1 singles competing for the Song of the Summer crown this year — and yet none of them could compete with “Rockstar,” which spent seven weeks atop the Hot 100. DaBaby’s melodic rap smash received an assist from Roddy Ricch, fresh off of his own chart-topper “The Box,” as well as a timely Black Lives Matter remix that will help define its legacy at the Hot 100’s summit. – J.L.

What many considered to be one of the most controversial songs of 2020 for its sexually explicit nature also became one of its most viral celebrations of female empowerment, from two household names of hip-hop. Cardi B and her ace Megan Thee Stallion body the raunchy old-school hip-hop track by swapping throaty verses over the throbbing bassline from Baltimore club DJ Frank Ski’s “Whores in This House.” “WAP” hopped right to the top of the Hot 100 with record streaming numbers, and asserted the star duo’s dominance once more. – H.M.

Roddy Ricch’s “The Box” rose from a TikTok behemoth to conquer the Hot 100 for 11 weeks from January to March, owning 2020 just as the year had gotten started. Released on Bird Vision/Atlantic Records, the reserved star takes a tactical route on the sleek, 30 Roc-produced single, which pieces together Instagram-worthy captions (“She sucked a n—a soul/ Got the Cash App,” he raps) with Ricch’s inescapable ad-libs and the ubiquitous sound of the beat’s rising strings and “ee er” vocal squeaks. Along with its chart dominance, “The Box” surpassed 1 billion streams on Spotify and landed Ricch a fistful of Grammy nominations at next year’s festivities. – C.L.