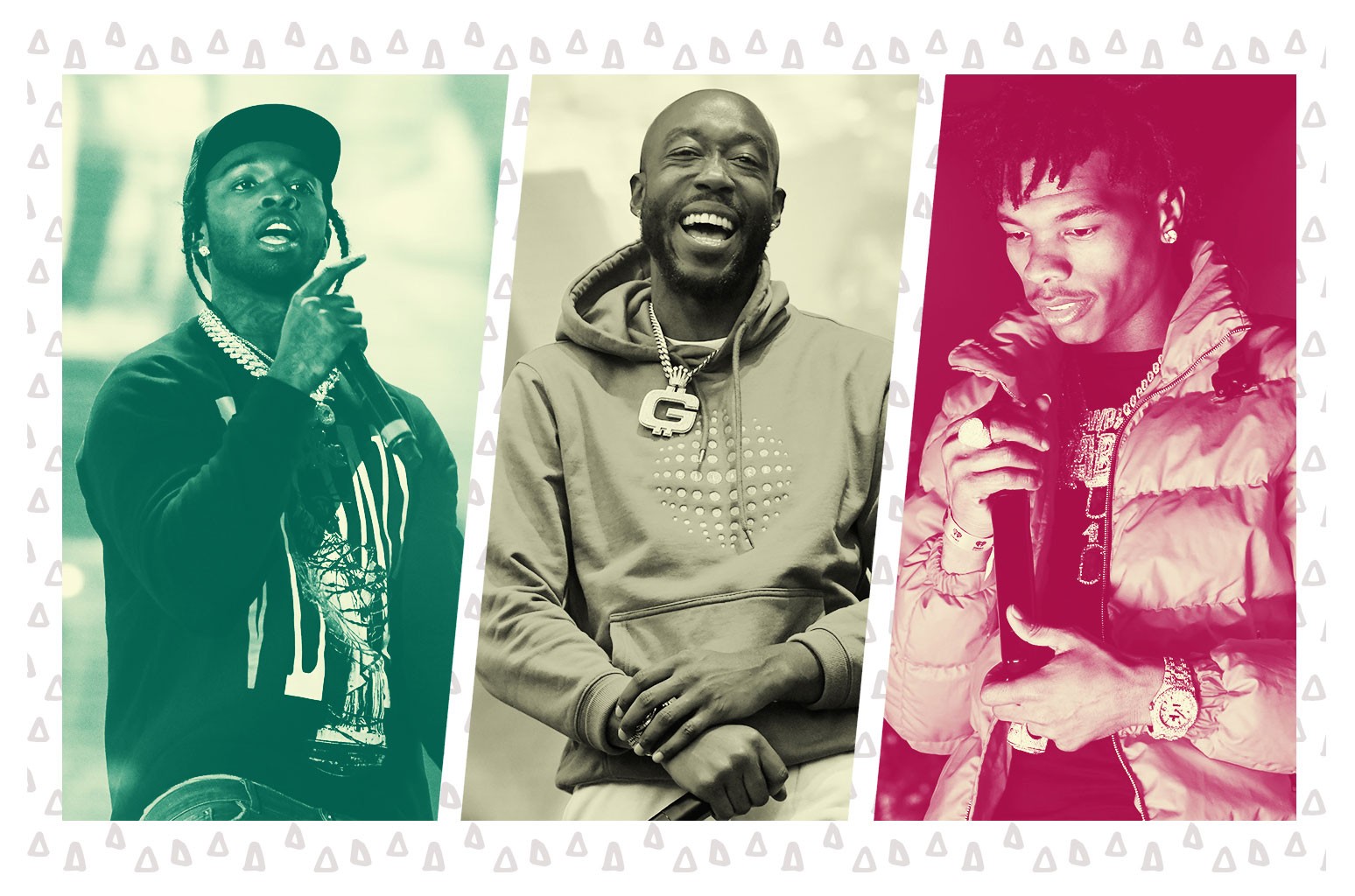 20. Benny the Butcher, Burden of Proof

Burden of Proof is nothing short of a victory lap. Benny the Butcher comes out swinging and keeps steady blows coming for all 12 rounds of the album. Produced by Hit-Boy, Benny is at his most ambitious on Proof, but the moment doesn’t phase him — in fact, he’s rapping with more confidence than ever before (“Said I’ma be a legend soon, shit, I’m a legend now,” he boasts on the closing track, “Legend”). And why shouldn’t he? Even if he doesn’t feel famous, there’s little question remaining that he’s established himself as a brand name within hip-hop. – JOSH GLICKSMAN

Gunna isn’t the flashiest rapper coming out of Atlanta, but a project like WUNNA demonstrates why he’s one of hip-hop most reliable presences: there aren’t any real missteps on its extended track list, with a few best-of-the-year gems (“Skybox,” “Dollaz On My Head” with Young Thug, the Lil Baby reunion “Blindfold”), top-notch beats, and a charismatic host with a sharper-than-ever flow. – JASON LIPSHUTZ

This year, Bagg rocketed to rap’s elite with his ambitious effort Time Served. After blazing a trail with his Heartless mixtape series, MoneyBagg emerged into a real contender with this 15-track collection. The Memphis staple doesn’t only shine when he ruminates on his corner boy glory (“Federal Fed”), but when he slings out club jams with his rap compatriots Lil Baby (“U Played”) and Megan Thee Stallion (“All Dat”). – CARL LAMARRE

Prior to the delivery of Good News, her official debut album, Megan Thee Stallion gave the Hotties something sweet to nibble on with her third EP Suga. Her new alter ego Suga, who’s “besties” with her former Doppelgänger Tina Snow, serves biting bars on singles like “B.I.T.C.H.” and “Captain Hook” as the main course, and sumptuous auto-tuned R&B ballads like “What I Need” and “Crying in the Car” for dessert — keeping listeners licking their lips throughout. – HERAN MAMO

“Good news, good news, that’s all they want to hear,” Mac Miller laments on the centerpiece to his first posthumous album. It should be no surprise that the late Pittsburgh rapper doesn’t have a lot of that to offer on Circles, but what he does have to offer, over warm Jon Brion arrangements, is maybe more rewarding anyway — a feeling of calm after the storm, not of serenity necessarily, but one of the hardest-earned stability. He says “Today I’m fine,” and you believe him. He says “Do not be afraid,” and you take his word for it. – ANDREW UNTERBERGER

The 20-year-old Alabama rapper’s brash ego comes out in the eccentric flow that threads together her excellently produced debut mixtape. Borrowing from Playboi Carti and Ethereal’s 2015 track “Beef,” Flo Milli’s hit single “Beef FloMix” serves big-mood-energy on a silver platter to the bullies who tried snuffing her shine, thanks to TikTok virality that invited a deal with RCA Records. Despite the project’s 30-minute runtime barely lasting a pregame, Ho, Why Is You Here? successfully sustains the party and checks anyone else’s ego at the door. – H.M.

Nas’s 13th studio album, King’s Disease, is a happy medium for the old school and new rap fans. By teaming up with producer Hit-Boy, Nas sounds bouncy and rejuvenated. The album includes standouts like the Big Sean-Don Toliver collaboration “Replace Me,” where the Queens Don Juan maintains his player card when sweet-talking his lady; while on “Spicy,” he whips up a concoction with A$AP Ferg and rising local upstart Fivio Foreign. – C.L.

Providing valuable lessons in self-care for the self-professed headasses out there, Open Mike Eagle’s Anime, Trauma and Divorce is equal parts confession and affirmation. The rapper’s admissions about middle age-expanded waistbands and Netflix-ruined marriages, delivered over downbeat and tenderly soulful productions, feel heavy but never quite burdensome — instead offering a comforting, knowing hand on the shoulder of anyone Going Through S–t during a cartoonishly difficult year. – A.U.

On July 16, Logic announced that his new album, No Pressure, would be his last before retirement. “It’s been a great decade. Now it’s time to be a father,” the Maryland-born MC wrote in an Instagram post. From there, he let the music do the talking, as usual. Over the course of 15 songs, he pays homage to all the sounds, styles and topics that brought him to stardom — be it well-used samples, quick-witted lyricism, or blunt discussions surrounding his upbringing and mental health — all while keeping an eye toward the future (“I could tell you more about diapers than modern rappers in cyphers,” he says on “DadBod”). – J.G.

Though Westside Gunn isn’t the most potent lyricist from his Griselda Camp, his penchant for slick street talk and colorful collaborations outshines his counterparts. From piecing together all-star lineups with Joey Bada$$ and Tyler, The Creator on “327,” to tag-teaming with New York legend DJ Premier on the hall-of-fame worthy track “Shawn Vs. Flair,” it’s hard to dismiss Gunn’s musicality on Pray 4 Paris. – C.L.

While fans cherish and preserve Juice WRLD as their angel speaking to them from above, the late rapper confronts his demons on his first posthumous album Legends Never Die. He foresees the path where his drug habits will take him, seemingly succumbing to his fate in tracks like “Titanic.” But even after his tragic death from an accidental overdose at 21 in December 2019, Juice hovers like a lighthouse by flashing glimpses of hope amidst bleak confessional ballads to his listeners. – H.M.

After building a fanbase with her torrid freestyles on Instagram, Chika doled out her seven-track mini-opus at the top of 2020. The 20-minute EP finds the 23-year-old hopscotching her way through music industry fluff. By seamlessly swerving through rookie mistakes (“Industry Games”), Chika soars as a lyrical skywalker (“Songs About You”). The co-signs are aplenty, as she lands nods from Jay-Z and Diddy for her wordplay, but it’s her ability to nimbly switch gears from rapping to singing that makes this EP such an exciting listen. – C.L.

There simply aren’t many current rappers with a better panache for storytelling than Polo G, the Chicago MC who broke through last year with the top 20 hit “Pop Out.” The GOAT let him continue to explain his humble beginnings and misgivings with fame, while also absolutely bodying verses, as he does on “Go Stupid,” a summit of young rap talent featuring Stunna 4 Vegas and NLE Choppa. – J.L.

“I’ve seen good movies end bad plenty times,” Drake warns on “Mr. Right Now” early in Savage Mode II. No worries here, though — this blockbuster sequel is much more Aliens than Die Hard 2, satisfying all the way through and brilliant enough in its own right to engage longtime fans in heated “Is it actually better than…?” debates. Helps to have such an All-Star supporting cast of course: Not just Drake, but Young Thug, Young Nudy, and even an actual Oscar winner in narrator Morgan Freeman. But the stars of the show are still Savage, playing both the set’s protagonist and antagonist with equal aplomb, and Metro, directing the proceedings with Ridley Scott precision and Tony Scott explosiveness. — A.U.

Much like the pasta dish that the album shares its names with, Alfredo isn’t going to leave anyone at the table feeling unsatisfied. Freddie Gibbs and The Alchemist need just 35 minutes to deliver a 10-course meal that’s packed with star-studded features (Rick Ross, Tyler, the Creator, Benny the Butcher, Conway the Machine) and showcases the veterans turning in some of the most immaculate songwriting and production efforts, respectively, of their careers. Gibbs glides along the easily digestible beats throughout, ultimately earning his long-awaited, much deserved first Grammy nomination — and The Alchemist’s second — for best rap album. – J.G.

They’re not exactly going Back to the Future, but it’s not surprising that Jay Electronica and silent partner Jay-Z would still need to fire up the flux capacitor to get in the mode for A Written Testimony, one of the longest-anticipated debut albums in hip-hop history. Listening to the two Jays on this set, you couldn’t necessarily tell which is the Hall of Fame veteran and which is the hungry protege with something to prove — both MCs sound locked in and voracious throughout, whether going interstellar with Travis Scott on “The Blinding” or getting biblical with The-Dream on “Ezekiel’s Wheel,” feeding off each other’s gigawatts of energy to keep pushing harder, pulling deeper. A decade-awaited freshman LP that actually exceeds expectation? Great Scott!  – A.U.

Lil Uzi Vert seemed to channel Maximus from Gladiator by the end of 2020, turning to his rabid fans after dropping his long-awaited Eternal Atake album, a full-length deluxe edition and a collaborative album with Future and bellowing, Are you not entertained? The follow-ups to his highly anticipated first album since 2017’s Luv Is Rage 2 were delicious confections, but Eternal Atake remained the main course, a relentless showcase of technical skill and galaxy-brain hooks that we’re still unpacking months later. – J.L.

When Killer Mike told Billboard in early May that RTJ4 would “march through the motherf–king world like a beast,” it felt like more of a figurative assessment. But when he and El-P surprise released the album on June 3 (two days ahead of its planned arrival), the album’s timely message accompanied protesters taking to the streets and demanding justice following the police killing of George Floyd on May 25.  It resonated, scoring the duo’s first top-10 entry on the Billboard 200, while exemplifying that even as the Run the Jewels fan base continues to grow on a global scale, their tried-and-true formula of pairing socially conscious rapping and brash production with their natural, affable chemistry isn’t going anywhere — nor does it need to. – J.G.

2. Pop Smoke, Shoot For The Stars Aim For The Moon

Most posthumous albums reflect on a pre-existing legacy; for Pop Smoke, Shoot For The Stars Aim For The Moon — released months after his tragic death at the age of 20, just as he was about break into the mainstream — made him a superstar in death. As one of the most commercially successful albums of the year, the full-length was rife with A-list guests paying tribute to the Brooklyn rapper (including 50 Cent, who helped guide the project as an executive producer), as well as gestures toward R&B and more soulful sounds that showcase what could have been. – J.L.

Baby earned his stripes in the rap game with his sophomore album My Turn, which debuted at No. 1 on the Billboard 200 and ended up spending five weeks on top. His signature baritone fleshes out his rags-to-riches account (“Big stage, long way from Section 8,” he raps on “Emotionally Scarred”) over hissing hi-hats and synths to touching flutes and harps. But “The Bigger Picture,” his contribution to this year’s Black Lives Matter protest anthems — added to the set’s Deluxe Edition following its June release — framed the ATL native as one of the most relevant artists of 2020 for how he can meet the movement at every moment, and speak on it like a true prophet. – H.M.