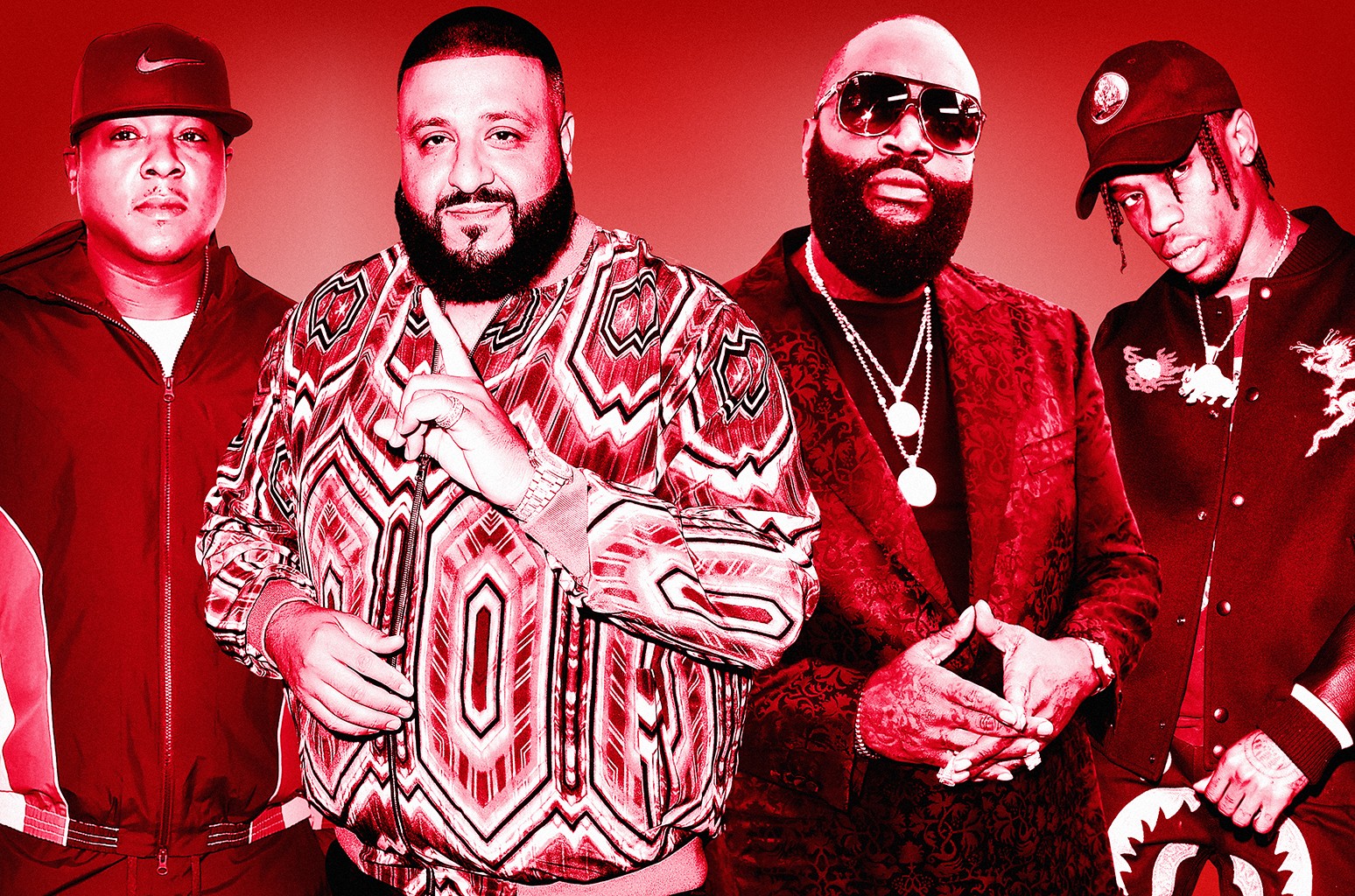 The holy grail of ad-libs, the crowned king of the grunt, the undisputed master of the indiscernible noise as a part of a song. Rick Ross’ grunt helped define rap in the late ’00s, becoming as popular as his features themselves, and one of the most imitated ad-libs among rap fans.

A verse marked by the grunt at Rozay’s peak pretty much assured a hit. Ross’ already insanely deep barking-style rapping could easily stand alone as a mark of his rough style, but the unmistakable grunt became a true testament to the standout demeanor of one of Maybach Music Group’s most important rappers.

Pusha T is definitely not new to this, starting off his career in the group Clipse with his brother No Malice, and having a resurgence of sorts when Kanye signed him, eventually naming him president of his label G.O.O.D. music. And Pusha T’s “yugh” has stood the test of time as one of the most distinct, long-standing, satisfying sounds to hear on a track.

The origin of one of rap’s best ad-libs comes in a song that’s littered with incredible ad-libs, the one and only “What Happened to That Boy.” There’s seems to be no real rhyme or reason to this sound in particular, but something about how hard it sounds when T pushes it out at the end of a line makes it one of the genre’s best. In recent years, he’s seemed to have gone for a softer “yuh” sound on tracks like “Drug Dealer’s Anonymous,” but Pusha’s legacy will still always live on in the denser “yugh.”

To continue with the “What Happened to That Boy” theme, Birdman’s ad-lib of a literal bird sound has potential to sound laughable if coming from literally anyone else, and even from Birdman, it’s a little bit funny. In the case of “What Happened to That Boy,” the bird sound is the chorus of the song, making it the ad-lib’s most shining moment. The bird sound, paired with Birdman’s distinct handrub, has became one of the most famous gestures/sound combos in rap history.

The phrase “it’s lit,” came into popular culture at some point around 2015, and for Travis Scott, it never left. He adopted those two words as his own, yelling them out in a quick high-pitched chirp at the end of nearly every bar, or at the very least sprinkled at the intro of every song.

The ad-lib’s peak came somewhere around his 2015 album Rodeo, which seemed to be saturated with the phrase that had been otherwise used widely by teenage hypebeasts referencing partying and/or binge-drinking (including in the chorus to Scott’s crossover hit “Antidote”). And while there’s something decidedly less cutting-edge about the phrase  in 2018, there’s something to be said of Travis Scott’s undying commitment to the phrase, even as it’s phasing out.

Kanye’s ad-libs morph, grow, and exist as he does. An earlier Kanye didn’t really use many verbal add-ons, sticking to longer more melodic flows. However somewhere in the mid to later 2000’s, a leather-clad G.O.O.D. Music era Kanye took great pleasure in the repeated “haaaan” sound. The sound, which became immortalized by impressions by Jay Pharoah, was littered all over his Watch the Throne album with JAY-Z and on most of his features during the time.

However it seems as though the ad-lib died quickly, seemingly left out of most of his work afterwards, a symbolic mark of Kanye’s ever-changing style and approach to his sound.

The influx of social media has (for better or worse) changed a lot about music and how its received. So while DJ Khaled has been producing hits for over a decade, it wasn’t until he started to morph his rap ad-lib into an online catchphrase that his popularity finally peaked accordingly.

Khaled’s ad-lib is different than most on the list because of its original intent — as a long-time producer, his signature shouting initially served as a way to stamp his work, which may not have otherwise been credited to him when his songs blew up. However, after he began to also yell “We the best!” on Snapchat, his personality became part of the music he produced, and eventually he started to rap a few bars on songs himself. Khaled’s mastery of social media made for the best ad-lib marketing of the modern era.

Jadakiss’ signature squawk, a two-part squeal with the vague sound of a “ha-hah” is easily one of the funniest and best ad-libs of all time. For an otherwise extremely hard rap style, the ad-lib is weirdly jarring and almost out of place, making it match the confusing beauty of the early ’00s hip-hop scene.

Jeezy’s signature “yeahhhh” is an ad-lib that he loved enough to put both over and under his own bars. The drawn out “yeah” is like a less aggressive version of the famous Ying Yang Twins ad-lib, but is still just about as famous.

And that wasn’t even Jeezy’s only catchphrase. Definitely not to be confused with the aforementioned Jadakiss laugh, Young Jeezy’s had his own slowed-down, ultra-low, and drawn-out Atlanta version of the laugh, sounding something more like “ha haaaaa.” This laugh is widely credited as one of the first popularized ad-libs, appearing in pretty much every single song Young Jeezy was on in the 2000’s, which when paired with his features, felt like somewhere in the millions.

Desiigner’s ad-lib is one of the few on the list that actually defined the rapper in a way that his rapping somehow couldn’t. Desiigner blew up after Kanye sampled his song “Panda” on The Life of Pablo’s “Father Stretch My Hands Pt. 2,” with the chorus dropping right as Desiigner’s distinct indiscernible sounds kick in. The noises he makes are a mix between a tongue roll and a gunshot noise, both done simultaneously at an incredibly loud volume.

One of the best parts about Desiigner’s ad-libs is that this is actually somehow exactly how the rapper talks in real life as well. As “Panda” continued to blow up, subsequent interviews showed the rapper speaking as quickly and as wildly as his imaginative ad libs. Desiigner has yet to REPLICATE the success of “Panda,” but his ad-lib’s influence may just last forever.

Two Chainz is another G.O.O.D. Music success story with an equally illustrious ad-lib game. On “Birthday Song,” Two Chainz not only gave the world the phrase, “all I want for my birthday is a big booty hoe,” but he also gifted fans one of the most classic ad-libs, a straightforward name yell to let everyone know whose verse it was. 2 Chainz has continued to shout his name on every song he’s on, with unforgettable results.

There is no singular Young Thug ad-lib, but the list would still be incomplete without him. Thugger’s wildly prolific portfolio, with five official mixtapes since 2015’s Barter 6, makes it understandably hard to stick to one signature sound across every song. So instead, Young Thug has blessed fans with a medley of ridiculous sounds throughout his career, the most distinctive being his reliance on a short “EE” sound.

On “With Them,” a track from Slime Season 3, there’s four different incredible line-ending ad-libs within the first twenty seconds of the song alone, and an added six or so others throughout the rest of the three-minute song. Thug’s distinct and almost goofy ad-libs parallel and compliment his own unique flair and style in real life, making him one of the best modern ad-libbers.

THE ARTIST: Chance the Rapper

Chance the Rapper is arguably one of the happiest-sounding rappers to date, and his ad-lib is an added exclamation point to some of his more upbeat songs. Chance’s voice has a certain higher-pitched rasp to it already, and his ad-lib is an elevated shriek-like version of that. His “igh-igh” sound is often used directly on beat, in a way that enhances the drop in the song. As for the spelling of this one, Chance took to Twitter to clarify.

A nearly two minute long video of Waka Flocka recording his ad-libs in the studio has over 1.3 million views on Youtube, which only partially puts the relevance and weird hypnosis-like quality of Waka’s adlibs into perspective. Waka’s early work was incredibly hyped and intense, a testament to the stylings of his hometown of Atlanta. His ad-libs, which are largely nonsensical yelling, fit perfectly and make for incredible online content.

Gucci Mane’s commitment to his ad-lib is unmatched. The rapper has an ice cream cone tatted on his face, an overall ode to his icy chains, and a corresponding ice-related ad-lib. Gucci’s earliest use of the now famous phrase came in 2011 with his song titled “Burr Burr,” which starts by repeating the phrase upwards of about twenty times. And in 2018, Gucci remains as committed to his ad-lib as ever.

THE AD-LIB: “Take that, take that”

Puff Daddy has given us so much to be grateful for. As for Bad Boy Record Label and ending somewhere around “Making the Band,” he’s always been on the pinnacle of what’s important in rap and hip-hop. During his reign in the ’90s and 2000’s, he also gave us both the signature Diddy Bop, and potentially more importantly, the “take that” ad-lib.

Something about the laissez-faire demand and repetition of Diddy telling whoever is listening to “take that” makes so much sense for a guy who has made a more modern reputation for himself, via his Ciroc empire and cropping the Jenners out of pictures. While Diddy hasn’t put out a ton of new music lately, here’s hoping he’s still using the “take that” ad-lib on whatever comes next.