(RNS) — Black gospel music is often portrayed as uplifting, an expression of joy in faith. But Questlove, the director of a new documentary about a pathbreaking Harlem music festival that took place over six weeks in the summer of 1969, said there is another side to gospel that is no less a release.

“There was a lot of, I guess what we can call primal musical expression or primitive exotic expression or just layman’s term, people acting wild,” Questlove, the leader of The Roots, the house band for “The Tonight Show with Jimmy Fallon,” told Religion News Service during a June 22 virtual news conference.

“So if it’s a gospel singer that’s catching the spirit, if it’s Sonny Sharrock doing one of the most atonal, destructive, violent solos I’ve ever seen on a guitar,” said Questlove, “I wanted people to know that this just isn’t Black people acting wild and crazy, that this was a therapeutic thing. And for a lot of us, gospel music was the channel, because we didn’t know about dysfunctional families and therapy and life coaches that we have now.” 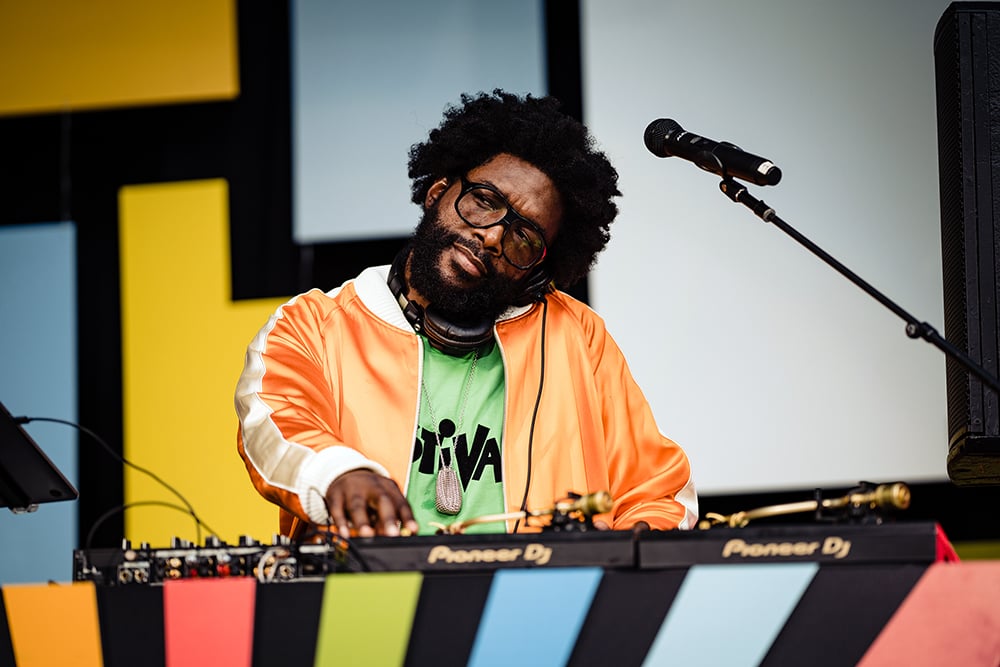 Questlove, whose given name is Ahmir Thompson, said he wanted the documentary to explain the meaning behind some of the most emotional music of the festival.

“Summer of Soul: (… Or, When the Revolution Could Not Be Televised),” will be released in theaters and streamed on Hulu starting Friday (July 2). The documentary premiered at the Sundance Film Festival, where it won a grand jury prize as well as an audience award in February.

Hundreds of thousands attended over the course of the festival, and musicians and attendees celebrated Black history, culture and fashion, seeking unity at a time when the nation was rocked by the Vietnam War and a drug epidemic even as it faced a racial reckoning. “Summer of Soul” opens with a drum solo from Stevie Wonder and features artists ranging from blues performer B.B. King to gospel’s Edwin Hawkins Singers to Puerto Rican percussionist Ray Barretto. Gladys Knight recalled in an interview in the documentary how she joined hands in prayer with the Pips, her male backup singers, before stepping onto the stage and was “totally taken back” as she witnessed the crowd responding enthusiastically to “I Heard It Through the Grapevine.”

Gospel music figured prominently on one day of the festival but was represented during some of the five other Sundays as well.

Artists and experts interviewed by Questlove for the documentary and featured between clips of festival footage — that sat in a basement for decades — agreed gospel’s role went beyond mere music. 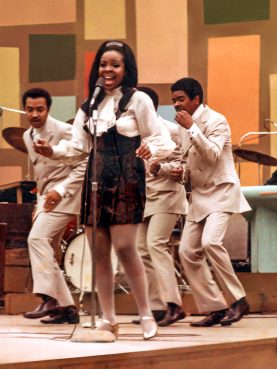 Gladys Knight & the Pips perform at the Harlem Cultural Festival in 1969, featured in the documentary “Summer of Soul.” Photo Courtesy of Searchlight Pictures. © 2021 20th Century Studios. All rights reserved.

The Rev. Al Sharpton in the documentary described gospel music as more than just a religious expression: “Gospel was the therapy for the stress and pressure of being Black in America.”

“We didn’t know anything about therapists. But we knew Mahalia Jackson,” said Sharpton, president of the Harlem-based National Action Network and a Pentecostal-turned-Baptist minister.

Jackson, a widely popular and influential gospel singer at the time, played a key role in the festival — not only as the headliner on July 13, 1969, the day designated as a gospel festival, but as a singer of “Precious Lord, Take My Hand,” a favorite hymn of the slain civil rights leader.

Moments before he was assassinated, King had leaned over the balcony just outside his room at the Lorraine Motel in Memphis, Tennessee, and asked a musician to play that hymn at a meeting planned for the evening of April 4, 1968.

That saxophone player was one of the musicians at the festival a bit more than a year later.

“Ben Branch was always revered by the kids like me ‘cause Dr. King’s last words was to Ben,” recalled Sharpton, who was youth director of the Southern Christian Leadership Conference’s Operation Breadbasket as a teen.

The documentary shows Branch, the leader of the Operation Breadbasket Orchestra, playing “Let Us Break Bread Together” as the Rev. Jesse Jackson prepared the festival gatherers for a musical prayer.

“We want Sister Mahalia, Mavis Staples and all of our groups together to prepare to do
as our prayer today ‘Precious Lord,’” announced Jackson, a minister who, more than 50 years later, still continues his activism and was arrested during a protest just weeks before the film’s theatrical release.

Staples, a member of The Staple Singers, recalled in an interview for the documentary that she was floored to be asked by her “idol,” Mahalia Jackson, to help sing the hymn.

“It was just an unreal moment for me,” Staples, who started the song slowly, recalled. “I’m telling you, that was the time of my life. When she gave me that microphone back, I said, ‘Oh, she likes what I’m doing.’”

Questlove noted it wasn’t just gospel singers who featured the genre in their festival performances. Others, such as The 5th Dimension, featuring lead singers Marilyn McCoo and Billy Davis Jr., included the style as they sang other flavors of music, including their rendition of “Aquarius/Let the Sunshine In,” from the Broadway musical “Hair.” 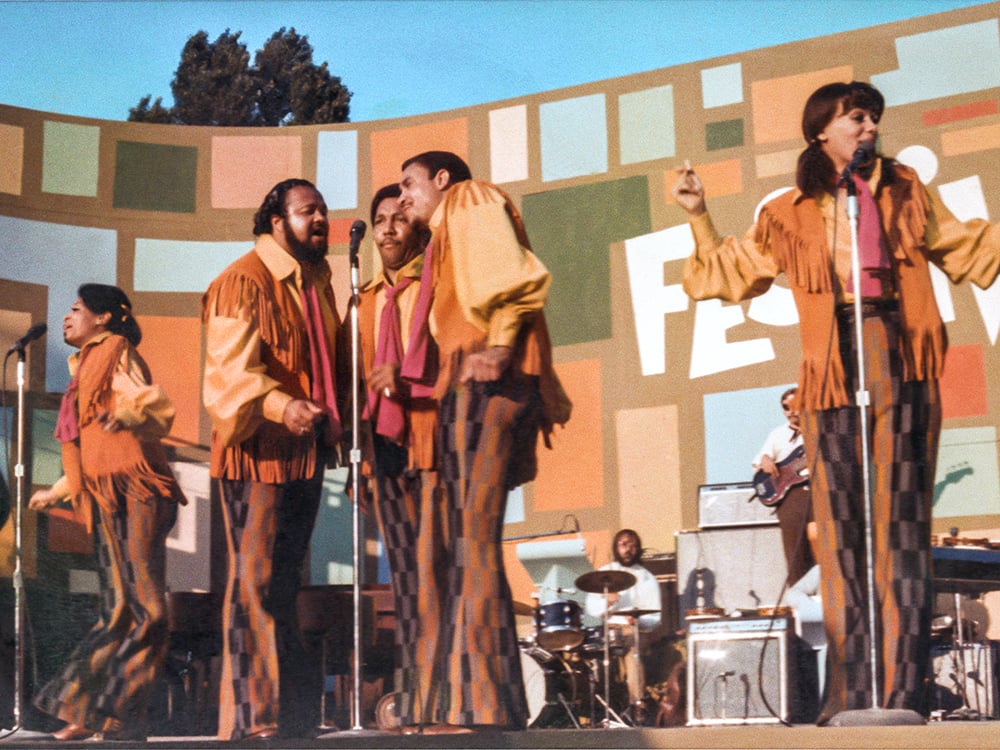 The 5th Dimension performs at the Harlem Cultural Festival in 1969, featured in the documentary “Summer of Soul.” Photo courtesy of Searchlight Pictures. © 2021 20th Century Studios. All rights reserved.

“This performance of theirs at the Harlem Cultural Festival was closer to that of a gospel revival,” Questlove said at the news conference. “I’ve never heard Billy Davis, with the exception of one of their songs on their solo record, a song called ‘Your Love.’ I’ve never heard Billy Davis Jr. use his raspy gospel baritone, — AAHHHHEE — that sort of James Brown-ish sock-it-to-me, that sort of thing.”

In their interview in the film, McCoo and Davis talked about how happy they were to be received at the festival as they were — Black artists who had appeared on “The Ed Sullivan Show” but also had been attacked for singing pop music and “not being Black enough.”

“Billy made all those wonderful gospel licks in his ad libs,” McCoo said. “Our producer said, ‘OK Billy, take it to church,’ and Billy knew exactly what to do because Billy sang gospel in his teen years.”

Beyond the inclusion of gospel, the overall festival exuded a sense of unity and a yearning for hope at a time when not only King but Sen. Robert Kennedy and Harlem-based Malcolm X had been lost to assassins’ bullets. 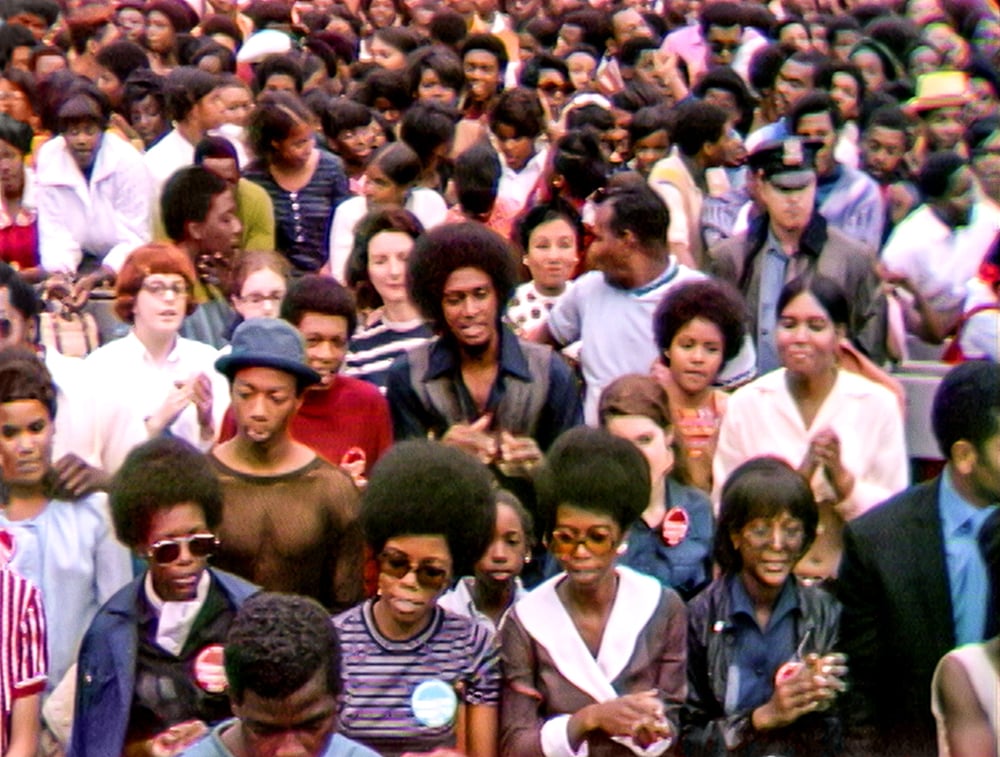 The Harlem Cultural Festival in 1969, featured in the documentary “Summer of Soul.” Photo Courtesy of Searchlight Pictures. © 2021 20th Century Studios. All rights reserved.

Sharpton recalled the singing of genre-spanning Nina Simone, who performed “To Be Young, Gifted and Black,” as he spoke with Questlove in the film.

“Nina Simone sung that in her tone that is somewhere between hope and mourning,” Sharpton said in his interview in the film. “I mean, nobody could capture both spirits like Nina. It defined a whole generation because you could hear in her voice our pain but our defiance.”