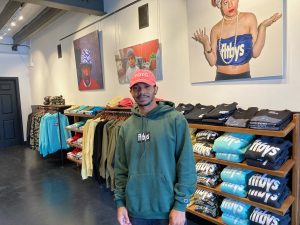 KOTA The Friend in his new Fltbys shop in Harrisburg.

Harrisburg just got a little cooler.

On Thursday, hip hop artist KOTA The Friend signed autographs at the opening of his Fltbys (flight boys) streetwear shop in Midtown Harrisburg.

“It feels great,” KOTA said. “It feels like a relief.”

KOTA, a Brooklyn, NY-based artist, visited Harrisburg with a friend before deciding he wanted to open a business in the city. Fltbys, his brand, opened in the Reily Street building across from Midtown Cinema that formerly housed several restaurants.

“We came out and really loved the area,” he said. “We want to be a part of a community that is growing.” 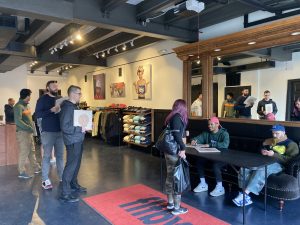 The shop sells hoodies, hats, T-shirts and other merchandise.

Martin Ton and Dylan Shearer live in Midtown, near Fltbys, and came to meet KOTA on Thursday.

“I was excited about them opening up,” Ton said. “It’s a cool place. It’s nice to have something different.”

Other fans flew into the city for the weekend.

“We’ve been dying to see him in concert for a while,” said Danny Ricondo and Leslye who flew from Miami, Fla., to Harrisburg. “His music is amazing.”

If you like what we do, please support our work. Become a Friend of TheBurg!