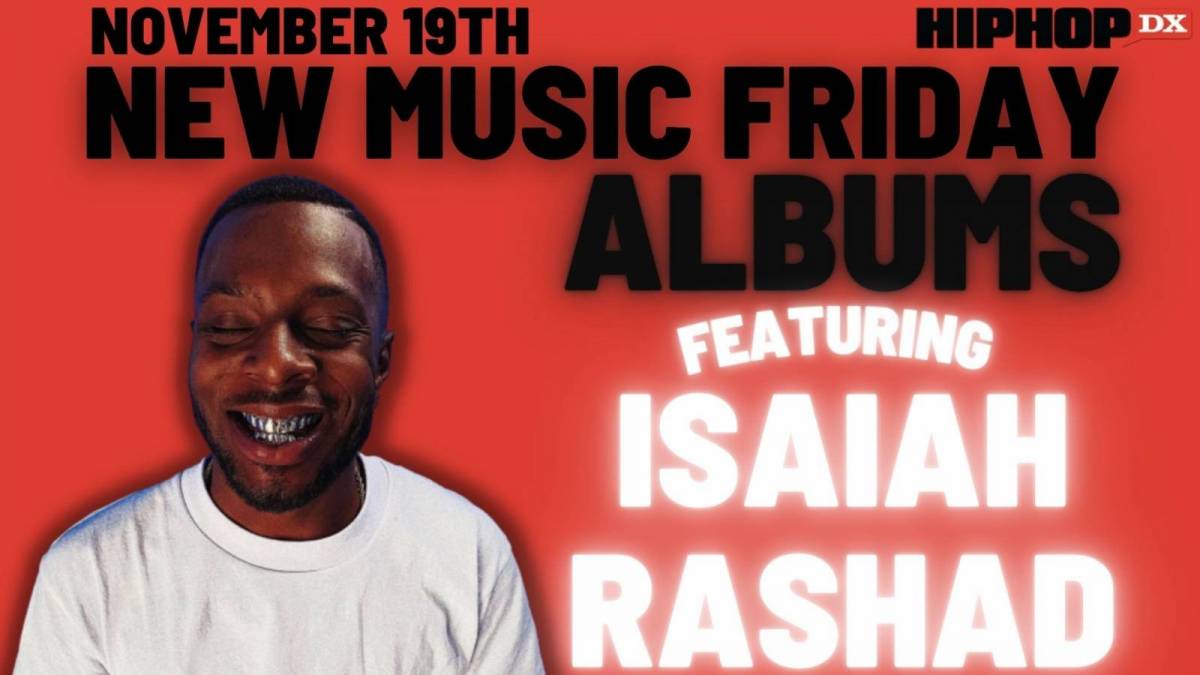 HipHopDX – Welcome back to the latest edition of New Music Friday, where HipHopDX provides you with the best collection of albums from Hip Hop and R&b each and every week.

This round-up, which covers the albums which dropped on the week ending on Friday (November 19), is ripe with the latest projects from artists including French Montana, Isaiah Rashad and Lancey Foux.

Also included on this week’s list is Kaytranada, Leon Bridges and Max B. Stay warm, and keep reading for the best new music of the week.

Earlier this year, Top Dawg Entertainment’s Isaiah Rashad took the rap world by storm with the release of The House Is Burning, his highly anticipated latest album, and the first project he’s released since 2016’s The Sun’s Tirade. Now, the Chattanooga, Tennessee rapper is back with Homies Begged, the deluxe edition to his third studio album.

Adding to the original sixteen tracks, Rashad continues his exceptional year, squeezing in a few more tracks before the end of year lists start to flow. After years of absence from Hip Hop, fans are surely thrilled to be receiving so much new music from Rashad in a short period of time.

Legendary California rap star Snoop Dogg is back with his second album of 2021 in the form of The Algorithm. Snoop has surely been thinking a lot about algorithms in his new role of Executive Consultant at Def Jam, signing Benny The Butcher this past week to a blockbuster deal.

But the iconic rapper hasn’t lost sight of his own music along the way. Earlier this year he released From Tha Streets 2 Tha Suites, and now The Algorithm. With features from Dave East, Fabolous and Jadakiss, Snoop’s most recent offering is not to be missed.

Ahead of the release of his forthcoming album, Bryson Tiller decided to drop a holidays-themed EP to keep his fans satisfied while waiting. Thanksgiving is still a week away, but Bryson Tiller will not be told it’s too early for a Christmas album.

Arriving with just seven tracks, A Different Christmas comes a year after the deluxe edition of Anniversary dropped, and addresses how much the holiday season has changed due to the pandemic and the strange last two years we’ve experienced.

French Montana – They Got Amnesia

Earlier this month, Twitter went up in a frenzy as French Montana took to the timeline to proclaim that the general Hip Hop audience fails to remember the success he’s had in his nearly two-decade career. After reminding everyone of his past hits and his excellent skills at breaking new artists, he announced the release of They Got Amnesia.

The Moroccan-American rapper’s latest project includes guest appearances from the likes of John Legend, Rick Ross, Kodak Black and it was expected to receive a Drake verse which was pulled given the recent tragedy of Travis Scott’s Astroworld music festival in Houston. Following-up on last year’s CB5, Montana is back with a reminder of his capabilities.

Kaytranada eludes conventional norms of the Hip Hop producer. Where much of what’s rapped over in 2021 would flounder without the vocals, Kaytranada’s beats easily stand on their own two feet.

Lancey Foux, who has previously graced the mic on projects by artists from Matt Ox and Skepta to Ken Car$on and JP THE WAVY, has just come forward with his latest full-length project LIVE.EVIL.

Foux’s latest expands on his explosive digital sound, which puts together influences from the likes of Lil Uzi Vert and JPEGMAFIA alike. Highlighting the album are “BIG SWAG” with 24kGoldn and the Lil Yachty-assisted “OUTTAMYMIND!.”

Iconic New York rapper Max B is reportedly slated to be released from prison at some point this year, but before his departure, he dropped Negro Spirituals. The former French Montana associate has been behind bars since 2016, but he’s now following in the footsteps of other formerly incarcerated NY rappers Bobby Shmurda and Rowdy Rebel, hoping to make a comeback once he’s home.

A departure from the smooth sounds of 2020’s Wave Pack, Max B, speaking from a jail phone, announced what fans could expect earlier this week. Led by the single “I Wonder (Coco Mango),” Negro Spirituals does not disappoint.

Florida’s Yungeen Ace linked with St. Louis MC Nuski2Squad for their latest joint project 2 Broken 2 Heal. Combining their skills for making rhythmic and heartfelt contemporary trap music. The two rappers may hail from drastically different cities, but they  have undeniable chemistry when sharing the mic.

Lead single “Don’t Know Why” perfectly sets the tone for what fans can expect from the project. Jacksonville has had a beef-filled year, led by multiple diss tracks and violence. It’s nice to see the scene finally cooling off and the artists being able to continue their musical pursuits.