Anderson .Paak and Bruno Mars have proven to be a winning formula since they officially joined forces as Silk Sonic in February.

The duo’s debut single “Leave the Door Open” soared to No. 1 on the Billboard Hot 100 — a career-high for .Paak — while their follow-up jam “Skate” cruised to No. 14. The group also won multiple BET Awards and MTV Video Music Awards this year.

For all the catchy tunes and chart-topping success, however, Silk Sonic has been a test of patience for Anderson .Paak and Bruno Mars fans, who’ve been waiting almost an entire calendar year for their joint album, An Evening With Silk Sonic.

While a tracklist has yet to be revealed, rumors of appearances from Childish Gambino and Ariana Grande swirled on social media this week after one particularly observant fan clocked that funk legend Bootsy Collins (who narrates the album) tagged the two artists in a recent Instagram post, before later editing his caption.

If true, An Evening With Silk Sonic will boast the first-ever collaboration between Anderson .Paak and Childish Gambino, who also channeled ’70s soul and funk on his 2016 album “Awaken, My Love!”

‘Bino’s last album, 3.15.20, arrived in 2020. Since then, he’s been busy wrapping up seasons three and four of his Emmy-winning TV series Atlanta while signing a lucrative deal with Amazon for future projects.

So….did Bootsy Collins reveal Ariana Grande and Childish Gambino were on the Silk Sonic album then edited the caption? 😭 pic.twitter.com/WaLXMTCe4w

While neither .Paak nor Mars have confirmed the rumors, the Silk Sonic duo did take to social media on Monday (November 1) to further tease their forthcoming album by sharing a trailer for a new single called “Smokin Out The Window.”

The Cheech & Chong-inspired clip finds the R&B duo belting out a tune and bopping their heads in unison while on a pizza and cigarette-fueled car journey. The only problem is, there’s no sound — a small but important fact that fooled some fans and frustrated others. 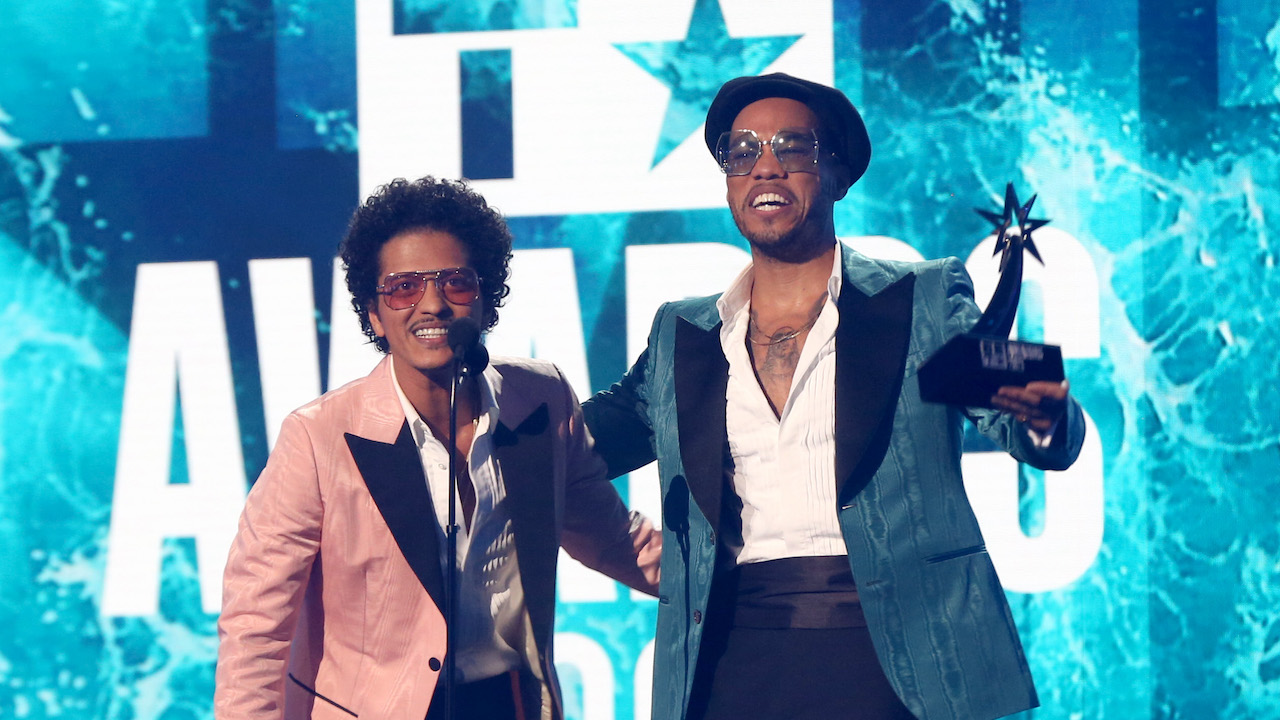 “Wow I’m over here turning up my volume trying to hear those vocals. U got us good,” one follower wrote, while another commented, “You don’t understand the level of frustration watching this with no sound.”

One fan even compared it to the hilarious silent performance scene from the 2001 film Pootie Tang. “Why the hell is there no sound? Is this Pootie Tang??” they joked.

It’s safe to presume that was no mistake, but instead a cheeky (if not cruel) troll from Anderson .Paak and Bruno Mars, who appear to be well aware of their fans’ growing impatience for the Silk Sonic album. “I don’t want to be binge-watched,” Mars told Rolling Stone of the duo’s unhurried output.

Fortunately, fans don’t have to wait long to hear the full song as “Smokin Out The Window” is set to arrive on Friday (November 5), followed by An Evening With Silk Sonic on November 12.