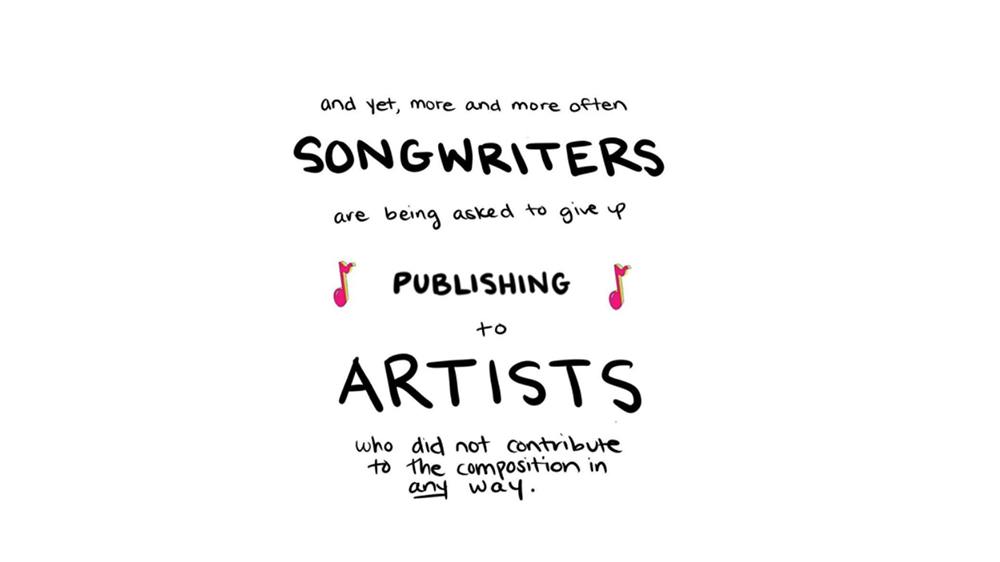 As the music-publishing market continues to heat up to unprecedented levels, songwriter groups have begun speaking out for more equitable treatment. On the heels of a “Pay Songwriters” petition launched in the U.K. last week calling for greater compensation for songwriters comes a social media post from an anonymous group calling itself “The Pact” calling for artists to stop demanding publishing on songs they did not write — a practice that likely dates back to the earliest days of copyright but has been particularly rife in the music industry for its entire existence.

“How does a songwriter make money? Publishing.

“And yet, more and more often songwriters are being asked to give up publishing to artists who did not contribute to the composition in any way.

It has long been an open secret in the music industry that certain artists and/or their management insist on receiving a percentage of publishing and a songwriting credit on songs they did not write, or made minor contributions to, in exchange for the artist covering the song. Songwriters often go along, on the premise that a smaller percentage of a hit song by a major artist is better than a large percentage of a song that isn’t a hit.

This practice dates back at least to Elvis Presley’s early superstar days and has continued to varying degrees ever since. Multiple songwriters and executives acknowledge that it exists, but decline to name names to avoid harming their careers.

“A very famous artist’s rep recently told me that giving them publishing despite their not contributing to writing the song in any way was ‘The tax you pay to be on ______’s album,’” wrote Warner A&R exec and songwriter manager Gabz Landman when reposting The Pact’s message. “That makes me sick. This is stealing, plain and simple. I do not know ANY other industry like this. a songwriters sole income is publishing and yet artists reduce the writer (who poured not only their talent but personal stories into song) share for absolutely 0 reason beyond greed. A tax is not an excuse.”

“I’ve given publishing to pretty much every artist I’ve written for in the first 8 years of my career regardless if they didn’t write much,” commented songwriter Autumn Rowe, who has written songs covered by Dua Lipa, Kylie Minogue, Becky G and others.

“While we’re at it can we talk about producers taking publishing when they had nothing to do with the writing of the song?,” said another writer. “A&R’s also asking for as high as 10% of the publishing,” chimed in another.

Landman and the writers either declined or did not immediately respond to requests for further comment.

It seems likely that this social media post is the first move from the Pact. Variety will have more on the situation as it continues to develop.