Rarely do music documentaries transcend the conventional biopic form to appeal beyond its subject’s existing fan base, but one hopes a filmmaker would at least attempt to surpass mere hagiography. When the subject is also the executive producer, however, all bets at objectivity are off. The subject in this case is Kid Cudi (neé Scott Miscudi), the risk-taking alternative hiphop artist who upended the music industry with his self-released single “Day ‘N’ Night” in 2009, also known for hits like “Pursuit of Happiness” and “Solo Dolo.” Fans will praise this film as yet another brave sacrifice at the altar of artistic vulnerability — because that’s what “A Man Named Scott” wants you to believe. But the authorized film lacks the artistic vision of Cudi’s musical talents, despite its best efforts.

That Cudi, who gave copious notes by the film’s own admission, thinks endorsements from the likes of Shia LaBeouf and Kanye West make him look good is the first clue that either a) he still doesn’t give a shit about public opinion, or b) he’s wildly out of touch. Though Cudi comes off as thoughtful, probing, and sincere, his association with LaBeouf, who claims they’re “best friends” in dogmatic lectures about what makes a true artist (“fully investing your heart,” according to him) is enough to put anyone off. You don’t even need to know about the abuse allegations against LaBeouf to find him insufferable in this film; he does that all on his own. (As for Kanye, the red hat says it all.)

Casting aside the ornamental hype men, the basic beats of “A Man Named Scott” are fundamentally compelling, at least to anyone interested in the evolution of popular music over the last decade. Born and raised in Cleveland, Cudi moved to New York in 2007 long on dreams and short on dollars. When other aspiring hip-hop artists were listening to Lil Wayne and Jay-Z, he was “zoning out” to John Mayer, Coldplay, Electric Light Orchestra, and Queen. His beats are melodic and genre-agnostic, his lyrics unexpected and deeply vulnerable.

Collaborators describe Cudi taking inspiration from everywhere; he’d hear a few notes off a record playing in another room and have the top line written before the producer could get the sound looped. He uploaded “Day ‘n Night” to Myspace in 2007, and through steady grassroots popularity, the song became a radio hit in 2009, peaking at number three on the charts. He had signed collaborations with Kanye and Jay-Z before he ever signed a record deal. “Everybody could see that he was on the wave of something new,” said Sony executive Sylvia Rhone, who won a massive bidding war to sign Cudi in 2009. 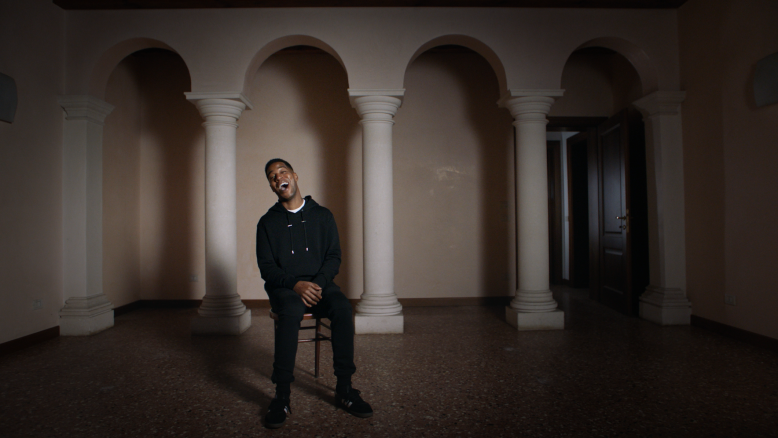 “A Man Named Scott” uses creative flourishes to amp up the artifice, though it’s more distracting than effective. Each interviewee is introduced with a graphic wall of yellow text, turning even the most contractual player into a multi-hyphenate creator/producer/soothsayer. It looks cool, but the text is too crowded to catch the most pertinent information, like the person’s name. Often, in the background of a seated interview, a smaller copy of the person will appear behind them, pacing the room or posing casually. (While most of the producers speak from their decked out recording studios, Kanye appears splay-legged in an eerily ordinary office, flanked by two blank PC screens.) When Cudi falls down the rabbit hole of addiction and suicidal ideation, the film breaks to introduce “A Kid Cudi Story, Starring Jaden Smith,” a micro-series of dimly lit wordless melodramas. That time would have been better used on more footage of Cudi in the recording studio, which surely must exist.

Aside from the music, “A Man Named Scott” rightfully highlights Cudi’s contribution to culture as an emotional truth teller. Whether it’s LaBeouf or a nameless fan saying it, a repeated refrain about Cudi’s music is “he saved my life.” Timothée Chalamet admits to pausing certain songs on “Man on The Moon” lest he be too overcome with emotion; the rapper Lil Yachty looked to Cudi’s otherness when his signature red braids used to get him ridiculed.

As Cudi’s star shot so quickly, he shunned the pressure to produce radio hits, preferring a hit to occur organically. He continued churning out albums, each so different from the last as to become unrecognizable from the fresh sound that connected with so many. Fans wondering what happened will find little solace in the fact that Cudi admits partial regret, worrying that he missed his wave and expressing disappointment that he was eventually dropped by Rhone. If “A Man Named Scott” is a harbinger of what’s to come, Cudi’s hit-making days may be long behind him.

“A Man Named Scott” premieres on Amazon Prime on November 5.

Sign Up: Stay on top of the latest breaking film and TV news! Sign up for our Email Newsletters here.