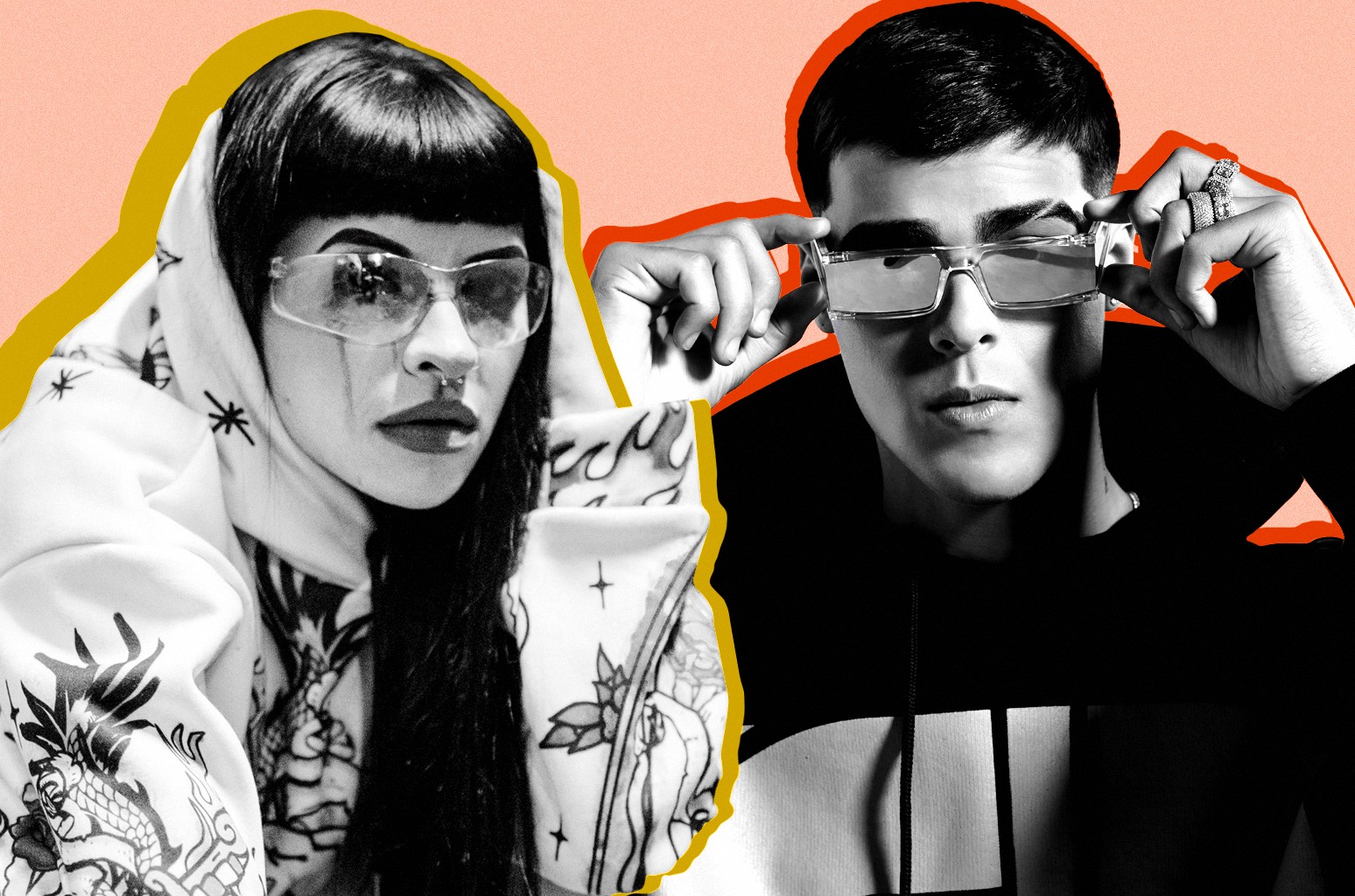 Cazzu (real name: Julieta Cazzucheli) has been an underground gem for nearly 10 years. Although artists such as Tini and Lali are strongly representing female artists in Argentina, she’s one of the few women killing the game in the South American country’s male-dominated trap scene. She’s a self-proclaimed emo girl whose dulcet vocals focus on love, heartbreak and second chances, as heard in her debut album Error 93. For her experimental sound, Cazzu seeks inspiration from artists such as Halsey and Jeremih, telling Billboard that she’s “simply trying to create what’s essentially in my brain.” She was put on our radar after she was spotted sharing the stage with Bad Bunny in concert, and also for her fiery verse on Dalex’s “Pa Mi (Remix).”

Jefnier Osorio Moreno, known on record as Lunay, launched his album debut Epico in 2019. The Puerto Rican rising star saw his name on Billboard charts for the first time with the “Soltera” remix (along with Daddy Yankee and Bad Bunny) which peaked at No. 73 on May 25, 2019. His career started after creating freestyle videos for Facebook and other social media platforms, where the numbers started rising — leading to Chris Jeday and Gaby Music signing him to develop his career.

Tijuana-based Grupo Firme continues to climb the Billboard charts, and kicked off the year scoring their first top 10 in the Regional Mexican Airplay chart with a cover of Banda El Recodo’s “Cada Vez te Extraño Más” featuring El Yaki. The up-and-coming sextet is steadily making a name for itself in the U.S., taking the industry by storm with their norteño-style ballads and the occasional upbeat ranchera that will get you on your feet. Their music videos on YouTube are already bringing in millions of views, some with over 20 million in less than a month.

The 25-year-old, signed to Sony Music Latin and HAMM (Hecho a Mano Music), made his debut as a singer with his first single and video, “No Te Vayas” on March 28, 2019 — with the video generating over 59 million views on YouTube. On Aug. 9, 2019, Camilo officially released his second single, “Tutu,” a collaboration with Puerto Rican singer Pedro Capó. Superstar Shakira loved the song, jumping right away into a remix. In 2020, Camilo is ready to release his album debut and start touring.

Natanael Cano is fairly new in the game, officially kicking off his music career in 2019. The 18-year-old Mexican singer-songwriter is part of the rising trap corridos movement, shedding the spotlight on his distinguishable corridos tumbados melodies and lyrics about having swag and running the streets. Cano recently debuted at No. 34 on Billboard‘s Emerging Artists chart (dated Jan. 18), thanks to four breakout singles on the Hot Latin Songs survey — including “Soy el Diablo,” in collaboration with Bad Bunny, which peaked at No. 16 on Hot Latin Songs in November; “Disfruto Lo Malo,” which reached No. 25 in December; “Ella,” featuring Junior H, currently at a new peak No. 44; and “Amor Tumbado,” which just debuted at No. 45. Cano is signed to Rancho Humilde.

Jhay Cortez (born Jesus Manuel Nieves Cortez) was 11 years old when he began writing his own music. In 2011, he garnered a Latin Grammy nomination as a songwriter on Tito El Bambino’s Invencible, while in 2018 he opened J Balvin’s 2018 Vibras tour, and last year he debuted at No. 11 on Billboard’s Latin Rhythm Albums chart with his debut album, Famouz. The Puerto Rican artist ultimately made it on international radars with his “No Me Conoce (Remix),” in collaboration with Bad Bunny and J Balvin. His musical influences pull from Don Omar, Drake, and Travis Scott, mixing hip-hop and R&B into his Latin urban fusions.

Hailing from Tijuana, Mexico, Adriana Rios is one of the emerging female voices of the regional Mexican genre. Her songs are romantic, but loaded with attitude, which makes her stand out. With a few years in the music scene, Adriana has already shared the stage with artists such as Los Angeles Azules, Julio Preciado, Fidel Rueda, Maria Jose, Aleks Syntek and Pancho Barraza. Rios is signed to AfinArte Music.

A teenager with the baritone of a ’60s balladeer, it’s impossible not to be captivated by Mexican Ed Maverick’s mild-mannered demeanor and candid lyrics. Yet his live performances, consisting of folk-pop melodies, transmit visceral confidence with effortlessness that few 18-year-old singer-songwriters can manage. With unambiguous narratives, Maverick embraces informal structures in his songs, paying homage with his acoustic guitar to lovelorn ballads, telling stories around relationships and a mundane world. Coming out of his first U.S. sold-out tour with songs spanning from indie folk to corridos, Maverick is gearing up to his first Coachella performance this coming April.

Myke Towers is no new face in the game. The Puerto Rican artist kicked off his career in 2016, peaking at No. 12 on Billboard’s Latin Rhythm Album Sales chart (dated April 2, 2016) with his debut album El Final del Principio. In 2019, he returned to the charts, where three of his tracks landed on the Hot Latin Songs, including “Si Se Da,” which peaked at No. 11. Inspired by artists such as Jay-Z, the Puerto Rican rising act conveys his personal experiences into lyrics, referring to his songs as “hymns that bring back memories of life, [moments] that impacted my life that I know would impact others.” Towers’ distinctive voice has nabbed him collaborations with Latin music’s biggest names, including Maluma, Becky G, Farruko, Arcangel and more.

Hailing from Barcelona, Spain, Aitana is a 20-year-old singer-songwriter who is keeping the essence of Latin pop alive one song at a time. Through her music, she pens lyrics about love, heartbreak and women empowerment. She’s best known for her catchy fusions, as heard in “Lo Malo” with Ana Guerra, and “Telefono.” She’s also collaborated with multiple artists such as Lele Pons, Morat and Cali & El Dandee. Aitana officially kicked off her career in 2017 as part of the Spanish reality talent competition Operación Triunfo, and is now a signed artist to Universal Music. In 2019, she received a Latin Grammy nomination for best new artist.

Up-and-coming singer-songwriter Nella hit the ground running in 2019. The Venezuelan artist released her debut album Voy, and won the Best New Artist gramophone at the Latin Grammy Awards in the same year. Influenced by her native country’s folklore roots, the versatile artist delicately combines her music with flamenco from the Andalusian region, which fits perfectly with her poetic lyrics. Latin superstars have also taken note of her talent, and artists like Alejandro Sanz and Carlos Vives have collaborated with her. Nella is currently on her Voy tour, making stops in the U.S. and Europe.

Eduardo Mario Ebratt (artistically known as Lalo Ebratt) is a rapper and composer born in Santa Marta, Colombia. Lalo found his own sound after merging rhythms such as trap, Afrobeat, hip-hop, soul and funk — which are sounds that are marking a new trend in urban alternative music in the Latin market. So far, he has collaborated with Reik, Ozuna, Sebastián Yatra and J Balvin. In 2019, he scored his first Billboard Hot Latin Songs entry after collaborating with Juanes on “La Plata.” Ebratt is currently signed under Universal Music Latino Entertainment.

Latin pop girl groups are rare nowadays. But Ventino, from Colombia, have filled in the empty spot with their unique sound. The quintet gained popularity on Youtube — where they have over 420 million subscribers — by singing covers. In 2018, they dropped their first album, also called Ventino. They kicked off 2020 releasing the heartbreaking ballad “Soltar Tu Mano” in collaboration with Roman. Ventino is signed under Sony Colombia.