Review: Messy, vibrant ‘Vietgone’ at the Guthrie is a love story that raps – Star Tribune 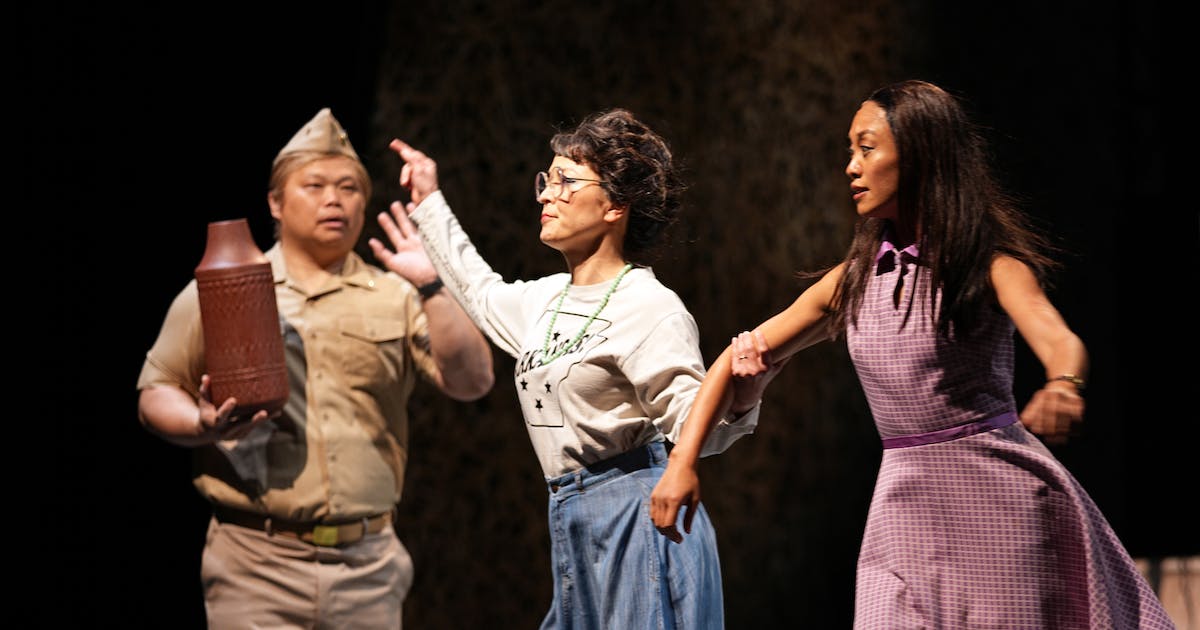 “This is not a story about war. It’s about falling in love,” we’re told at the beginning of “Vietgone,” the romantic comedy/hip-hop musical/drama at the Guthrie Theater.

Playwright Qui Nguyen, as played by Viet Vo, is the speaker in a prologue that establishes that “Vietgone” is very much about point of view. Most of it takes place in the 1970s and most of the characters are from Vietnam, either living there when Saigon falls or in refugee camps in America, shortly afterward. They speak like we expect characters in a play to speak, Nguyen explains, but the white Americans are exaggerations. All have blond hair, for starters, and they use the pidgin language — “Cheeseburger. Baseball. Discrimination,” — too often given to stereotypical immigrants in movies and plays.

In other words, the center of “Vietgone” is not the white, Europe-influenced version of the world you’ll see all over the walls of the Guthrie if you look around at intermission, but the dislocated experience of Nguyen, whose play explores his heritage.

It’s a complicated story, with two protagonists who may or may not be his parents. Helicopter pilot Quang (Hyunmin Rhee) trained in the U.S. but returned to his Vietnamese wife and children only to be sent back to America. Tong (Emjoy Gavino) leaves a quasi-fiance behind in Vietnam to make a life in America.

As Quang and Tong fall for each other, Nguyen ups the ante on the guy who said “the course of true love never did run smooth” by making things really un-smooth. Should we root for a man to fall in love with someone not his wife? If Tong is being truthful when she claims not to believe in love, should she encourage Quang and an American she flirts with? And how does that fit her desire to be seen as a whole person, rather than being valued for her looks back home? Oh, and where, exactly, is “home?”

My notepad was filled with those questions after “Vietgone.” It’s a rambunctious show whose “faults” — extraneous scenes, an awkward intermission, a non-chronological, globe-hopping structure that sometimes obscures more than it reveals — add to its chaotic, full-of-lifeness.

The chaos is deliberate. Nguyen’s story is based in fact but there probably weren’t ninjas at one moment, as the play would have it, and the songs with which Quang and Tong reveal their hearts are surreal, both because most people can’t freestyle and because rap barely existed in the mid-1970s.

Shane Rettig’s songs are an urgent element of the production, though. Their spoken words, fresh beats and soul samples resemble Danger Mouse and Black Effect’s brilliant new record “Cheat Codes.” It should be noted that the agile performers are better actors than rappers, but with the popularity of shows such as “Vietgone” and “Hamilton,” it’s only a matter of time before MFA programs offer classes such as “Freestyle 101” or “Rap Practicum.”

Director Mina Morita honors the messiness, especially in a thrilling montage that whips through a week with Quang and Tong. Her nimble production helps us put the pieces in place, with a big assist from projections designer Nicholas Hussong, whose images supply clarity and wit. The spots where reality and artifice bump into each other — the dopey “American” speaking style, for instance — also work as entry points into the play’s world, which is specific but could speak to anyone who has felt unmoored because they’re Mexican or Somali or trans or “other.”

I wish Nguyen didn’t abandon the mess, capping the romance with a tidy scene that feels sentimental because so much that has preceded it isn’t. But he rights the ship with a finale in which Quang tells the playwright what is essential about this story, a spectacular monologue in which Rhee is funny, moving and raw.

It’s an inventive piece — and, judging from overheard conversation, the first exposure to hip-hop for some theatergoers — but, in the end, “Vietgone” visits territory our best playwrights often return to. It’s about two people with a million reasons not to be together who just might end up together, anyway.