HotBoxin with Mike Tyson: 5 most famous rappers who have appeared on the podcast – Sportskeeda

Heavyweight champion Mike Tyson has plied his trade in quite a lot of business ventures post his retirement. The boxer hosts one of the most successful podcasts in the world: HotBoxin with Mike Tyson.

The podcast, which has been up and running since 2018, has featured hundreds of renowned personalities from various professions. It began with Mike Tyson hosting MMA fighter Cody Garbrandt and his brother, Zack, along with co-host Eben Britton.

Hundreds of episodes later, the podcast has recorded hundreds of hours of conversations between Mike Tyson and a collection of well-revered artists. Given Tyson’s well known affinity to rap musicians, the show has also featured some of the best names in the rap game.

Here’s a run down of the top five rap artists that have been on the show.

Episode 22 was one of the most entertaining of Hotboxin‘ podcasts, featuring a very interesting dialogue between long-time friends Mike Tyson and Snoop Dogg.

The duo discussed how they built “brotherhood” ever since Tyson got out of prison in 1995. They discussed religion, Nipsey Hustle, E-sports, Tyson’s brand, and other things for over 50 minutes.

One of the earliest guests to drop by Tyson Ranch, B-Real’s podcast with Tyson is a testament to the rapper’s exceptional conversational skills. The rapper, who was part of the legendary hip-hop group Cypress Hill, discussed his love for cannabis and how the drug has had an impact on his life.

The podcast saw them discuss adversity, something that both Mike Tyson and B-Real have dealt with. Tyson related his struggles to Muhammad Ali’s fights during the conversation. He admired the boxer’s tenacity and endurance, saying that it was near impossible to find an instance of Ali not being in condition for a 15-round fight.

Watch the full B Real appearance below:

The 19th episode of the podcast began with Tyson and rapper Logic discussing Frank Sinatra, his powerful quotes, and not beating up random people – all things that, of course, can be related to common folks. 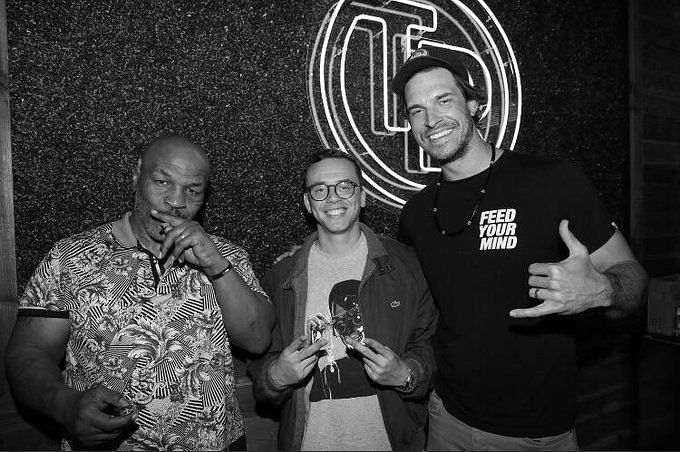 Logic will be a guest on Mike Tyson’s podcast “Hotboxin with Mike Tyson” that comes out this Monday https://t.co/N9pvAlDZpm

Two minutes into the podcast, Tyson began discussing DMT, about which Logic said that even hearing about gives him panic attacks. All around the conversation is really interesting, with the creative minds candidly sharing their journeys.

Check out Logic’s appearance on the podcast here:

As many know, Tyson is known to get deep during his podcast. When Wiz Khalifa made an appearance on the show, he leaned into this dynamic. explaining in detail his motivations behind making music and his interpretation of life and death.

Watch Wiz Khalifa’s appearance on the podcast below:

Tyson has shared that his episode with Eminem was the best interview that he ever did on HotBoxin’. The interview saw the rapper pose a lot of questions towards the heavyweight champion, deriving insight from the show’s host.

The duo went deep on Tyson’s mentality like never before. ‘Iron’ Mike was really comfortable discussing his mindset before entering the ring and what he was feeling during each fight.

The interview also showed Eminem’s interest in the sport. He was fairly emotional at different points during the interview, saying that Tyson was like a god to him. The conversation is surely one of the best to listen to in the history of Hotboxin’ with Mike Tyson.