It is very hard to paint the gory picture of your heart when it’s broken into several pieces. But the far-famed new hip hop artist Gang S.R is not afraid to talk about the bloody scene inside his chest. He believes that music has given him the best chance to celebrate love and ask for help in the time of need. Music helped him to save tears for another day when he gets betrayed by life, by the people whom he called homies. He makes non-stop music in the last few months to refurbish his image in the industry. He is back with a sensational rap song ‘Scared of Dreams’. Like the other songs he produced in past, this also tells a unique story of his life. He rips off a chapter from his life by exhaling the words in the song. He vents out the hidden tension and heavy anxiety with the ideal wordplay he incorporated in it. 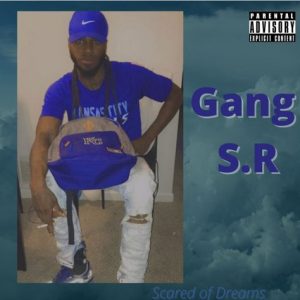 Gang S.R is a unique rapper based out of Kansas City, making his name popular with a grand exposure from his music. He makes original hip-hop numbers to shed the numbness and form a real connection to the great army of fans. HE has claimed a slice of history with the incredible hip hop number ‘Scared of Dreams’. It is wired with intimate confessions and an outrage that was killing him slowly. This emo-rap is produced with a crisp design that lulls the strong waves of heavy strums. He swallows his pride to preserve his originality with a strong pinch of opinionated reflections. He adds a groovy bass work to turn it into a slow-burner with a swift glide.

He has the fire inside his heart that keeps him focused on making incessant music. He wants to see his name on the Hall of Fame someday. Though he has met a few lightning rods in his life, it didn’t stop his musical adventure. He is rubbing shoulders with star-studded collaborations and his fans can’t wait to see him thriving what he has been fighting for so long. Just like you can’t predict the future, his next experiment is impossible to understand. ‘2 Deep’ is the latest single out on Soundcloud. Follow him on Soundcloud and Youtube for all the popular singles he has produced.

Plug into SoundCloud to listen to his music:https://soundcloud.com/gang-sr/scared-of-dreams-gang-s-r