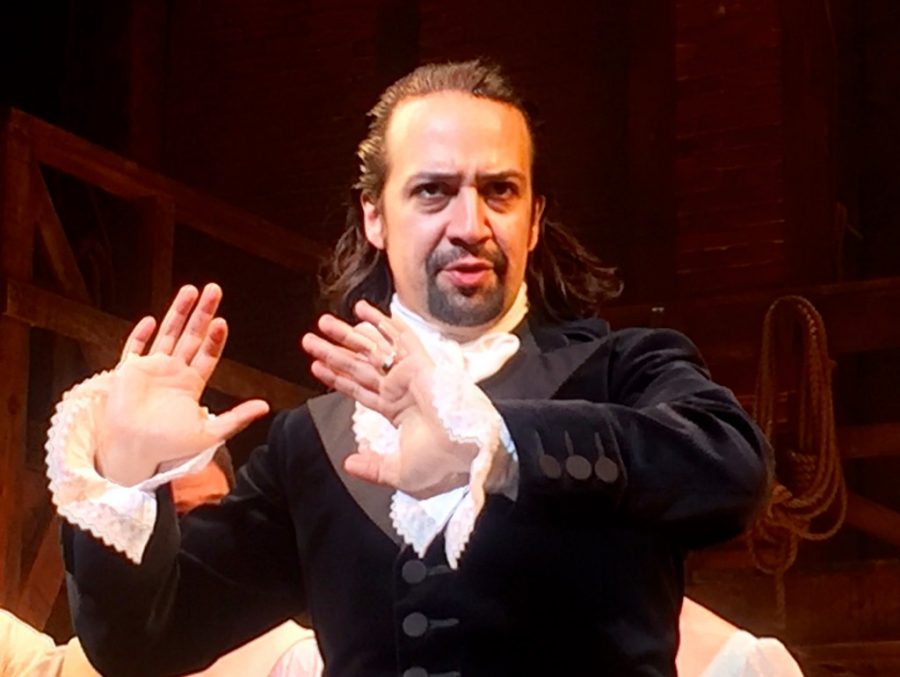 One reason why audiences love stories like “The Best of Enemies”, “Newsies” and “Pride and Prejudice” is because they transport the viewers to the time period they depict. The same can not be said for Lin-Manuel Miranda’s “Hamilton.”

The costume designer, Paul Tazewell explained to Business Insider the conscious decision to make the costumes period-appropriate from the neck down and modern from the neck up. The modern hairstyles might blend better with the hip-hop score, but they leave the viewer constructing the fourth wall for themselves.
At the beginning of the second act, Thomas Jefferson, played by Daveed Diggs, comes down the stage steps and sings “What Did I Miss?” because he had come back from France. The first time I watched that, I thought “What do you mean? You were there throughout the entire first act.” I thought this because Diggs played two characters, and his other character, Marquis de Lafayette, appeared in musical numbers from the first act such as “Aaron Burr, Sir,” “My Shot,” and “The Story of Tonight.”
The only job of a viewer during the play should be to enjoy the play. Instead, viewers of this play have to remind themselves who the actor on screen is supposed to be now. If the hair stylists put Diggs in a different wig for each character, it would have helped tremendously with the realism of the play.
Anthony Ramos plays nine-year-old, Philip Hamilton, as well as nineteen-year-old, Philip. However, as a 28-year-old, he did not play a believable nine-year-old in “Take a Break.” Philip should have been played by two people, so the viewer did not have to remind themselves during Philip’s rap that the person they were watching was supposed to be nine years old.
I have listened to audio-only versions of the songs in the musical many more times than I have watched video clips from the musical because the musical numbers and story progression in the play are stellar.
In an interview with Stephen Colbert, Lin-Manuel Miranda talked about the United Kingdom’s reception of the play, “You know it’s funny, they were all very like ‘You know we don’t know American history. I don’t know how it will play.’ And I was like ‘We don’t know American history! You’re fine.’”
Since Lin-Manuel Miranda knew that his audience was unfamiliar with the background behind the story he was telling, he should have made even more of an effort to create the world for the viewer.
The cabinet battles show how the rest of the play could have built Hamilton’s world for the viewers. The chairs of the cabinet members were arranged in a semicircle with Washington at the center as they watched Jefferson and Hamilton hash out their differences. The cabinet members reacted appropriately with shock and side conversations about what they heard. Even Jefferson’s and Hamilton’s dislike for each other’s ideas seemed real, given that their relationship was full of disagreements. Cabinet Battle 1 and Cabinet Battle 2 managed to create a period appropriate setting to fit the hip-hop music into without compromising the integrity of either.
The play “Hamilton” entertains the audience and educates them about parts of American history they do not remember or never knew. However, as someone who hates building the fourth wall for myself, every time I watch “Hamilton,” the elements that are not period-appropriate distract from the exceptional music score, storytelling, and acting.
If Miranda and Tazewell made more conscious choices to immerse the viewer in the world where it took place, the costumes would not have conflicted with the music score. The play would more effectively transport viewers to the time period it’s trying to entertain its audience with and educate its audience about.