‘WandaVision’: “Agatha All Along” Is the Song of the Summer – Decider 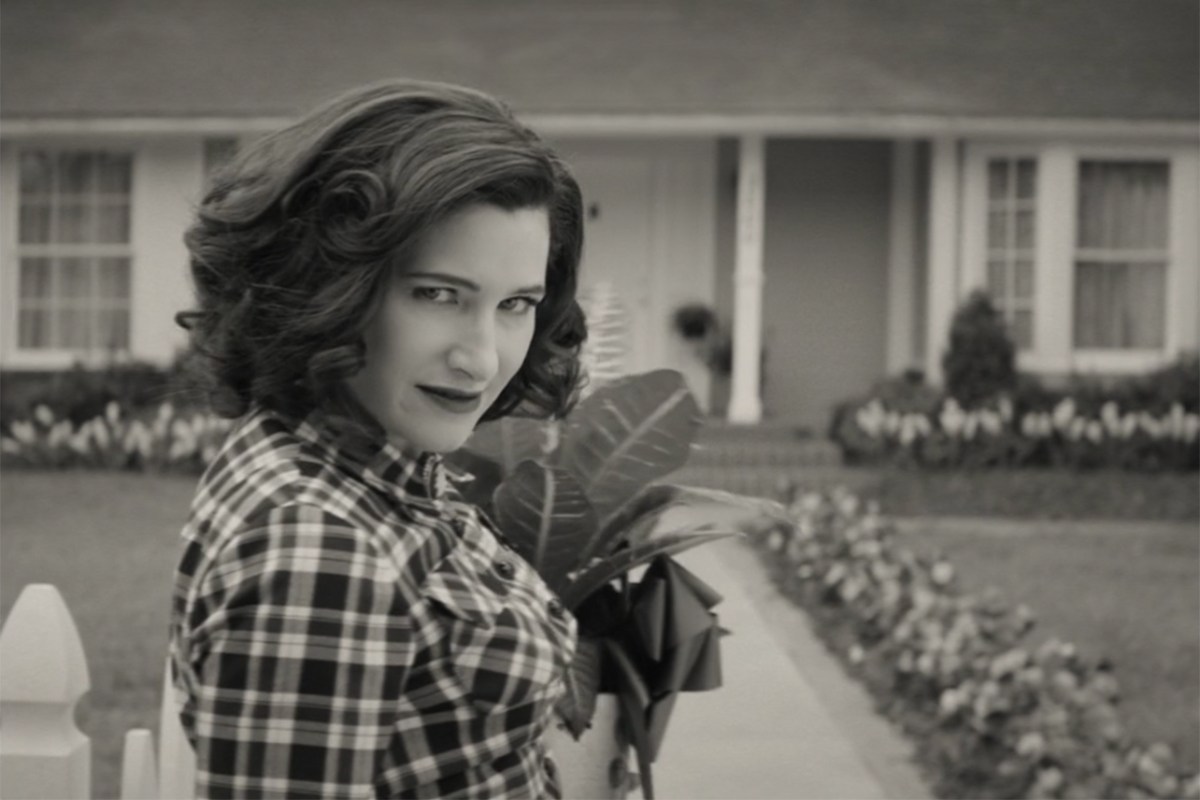 Since WandaVision premiered on Disney+, the series has been mixing in delightful sitcom theme parodies that range from Bewitched to this past week’s The Office riff. But one song at the end of this week’s “Breaking the Fourth Wall” has taken on a life of its own: “It Was Agatha All Along” is the official song of summer 2021.

Full acknowledgment that it’s February, and calling the song of the summer this early is hubris, at best. But “Agatha All Along,” which debuted in the closing moments of the episode, along with the reveal that friendly neighbor Agnes (Kathryn Hahn) is not only Marvel Comics witch Agatha Harkness, but also the villain that’s been pulling the strings in the series the whole time, slaps. It’s a full-on catchy banger that has taken on a life of its own over the past weekend.

Since Friday, the clip had been (illegally, I might add) ripped and posted on YouTube dozens of times, garnering hundreds of thousands of views. And it’s even inspired multiple remixes that are just as awesome. Take, for example, this trap/hip-hop remix by Leland Philpot:

Philpot takes the bassline, bumps it up, gives the short clip a few flourishes — and not for nothing, but his joyous dancing contrasted with how tired he is clearly helps sell the whole video. There’s also a rock-inspired remix that YouTube user TimmySean uploaded in record time after the episode aired:

Like with Philpot’s take, part of the joy here is how much fun TimmySean is having with his cover, adding a purposefully whiny “Where’s Reed Richards?” at the end, calling out the constant speculation on the internet — and this very website — that WandaVision is teasing Marvel superheroes The Fantastic Four.

Like the other songs in the series, the tune is written by Kristen Anderson-Lopez and Robert Lopez. Titled “It Was _____ All Along,” in the episode’s credits, the song was indeed performed by actress Kathryn Hahn, as well as Robert Lopez, Eric Bradley, Greg Whipple, Jaspar Randall and Gerald White.

But why “Agatha All Along”? What is it about this sitcom pastiche in particular, versus the previous ones, that has hit so hard with the internet?

Part of it is possibly the source material. Though some of the WandaVision songs have been a bit more subtle, “Agatha All Along” is pretty much a soundalike/inversion of The Munsters theme by Jack Marshall, a tune already adopted into a hit song by Fall Out Boy, “Uma Thurman.” It’s a catchy riff that works, a tried and true earworm.

There’s also the fact that villain songs are just more fun. Look at any Disney animated movie, and you can see how the bad guy getting to ham it up for a few minutes is a delight. Hahn does the same as Agatha in the clip, winking at the camera, even singing a few lines of the lyrics. It’s “Poor Unfortunate Souls” with more pep in its step.

But far more important, I’d venture, is the context of the song. WandaVision is a show designed to be pulled apart and examined like Vision’s (Paul Bettany) body at S.W.O.R.D., and though the sitcom themes are a delight, there’s so much episode that happens after they pop up. Who has time to talk about “Wanda, Wanda, Wanda Vision” when there’s so much weirdness, and so many Easter eggs to discuss?

“Agatha All Along,” on the other hand, drops at the end of this week’s episode. Other than a brief mid-credits scene, it’s the literal closing note we’re left on, the thing we’re thinking about for the next week until Episode 8 premieres. It’s also, despite most of the comics-savvy audience guessing Agnes was secretly Agatha, still played swiftly to reveal (almost) everything that’s been going on in the series.

The “Agatha All Along” lyrics even spell (no pun intended) it out, accompanied by footage of Hahn in every different sitcom time period from throughout the previous seven episodes:

Followed by Hahn’s perfect witch laugh at the end, it’s tough to think about any of the Modern Family inspired antics that happened in the previous half hour. It wraps together Easter eggs for the series, Marvel comics lore, plot, a catchy tune, and the excitement of propelling WandaVision into its endgame, all rolled into one.

If clubs were open? “Agatha All Along” remixes — like this one that takes the ditty and throws it together with fellow song of the summer contender “UK Hun?” from RuPaul’s Drag Race UK Season 2 — would be bumping on every dance floor. Heck, they could name it, “UK, Hahn?” and call it a day. Cars would be playing “Agatha All Along” at top volume as they made their way to the beach, Ryan Seacrest noting that it was number one for the sixteenth week in a row. Every apartment window in Bed Stuy would be open, blasting the witchy ditty at top volume.

As is, we’ll have to console ourselves with streaming the best TV song since Jaskier dropped “Toss a Coin to Your Witcher” over a year ago, for the hundredth time in a row.

Where to watch WandaVision