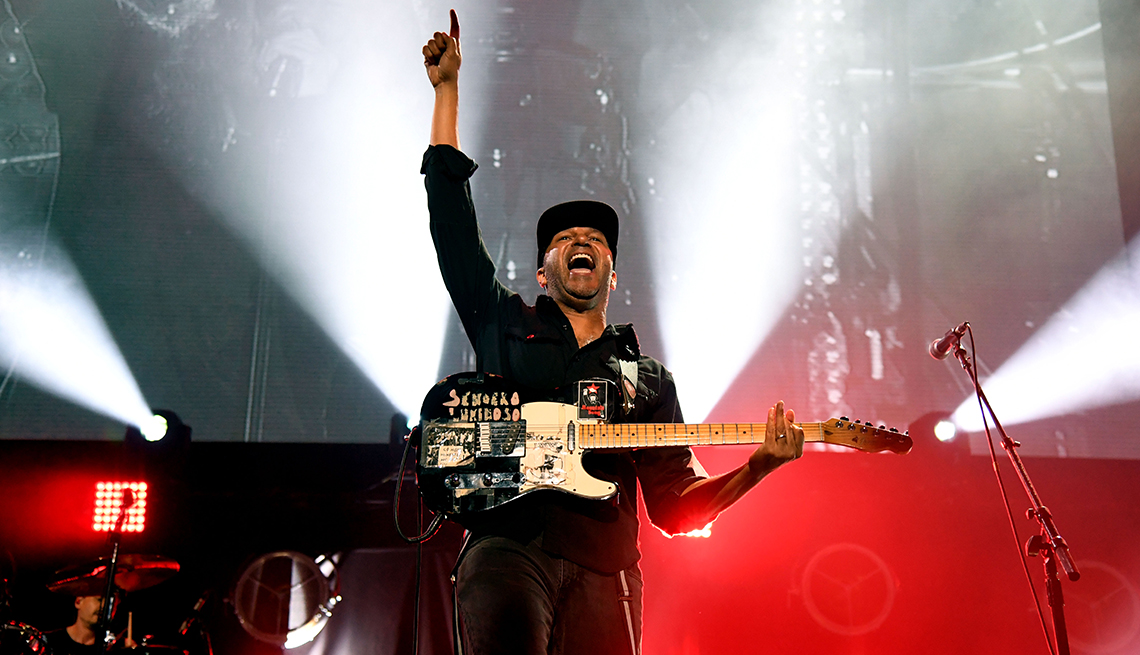 Although he’s always loved heavy metal, Tom Morello says it was bands like Public Enemy and The Clash that taught him it was possible to combine great music with revolutionary politics. In this playlist for AARP, he shares some of his favorite songs of rebellion and liberation.

“On some of the songs, one of the things they have in common is that they are songs that are couched in such tremendous song craftsmanship and gorgeous melody that their underlying meaning sometimes escapes the listener. John Lennon’s ‘Imagine’ would be top of that list. In the pantheon of Bruce Springsteen’s ‘Born in the U.S.A’. and perhaps Rage Against the Machine’s ‘Killing in the Name,’ it’s a song that people sometimes enjoy with having no idea that is a radical anarchist manifesto.”

This Land Is Your Land performed by Woody Guthrie

“Another song which you likely only learned the censored verses of when you were in the third grade. It’s Woody Guthrie’s radical manifesto. You know, the lines ‘Nobody living can ever stop me / As I go walking that freedom highway / Nobody living can ever make me turn back’ because this land was made for you and me. It was a song that was written against Irving Berlin’s ‘God Bless America.’ Woody Guthrie was deeply offended by that song, and so he wrote a song for the people. And one day, if everything goes as I’d like it to go, that’ll replace our national anthem.”

“Biko, kind of the Martin Luther King Jr. of South Africa during the apartheid era, was murdered by apartheid police while in custody. That Peter Gabriel song was one of the songs that really politicized me as a youth and made me realize that this was a global struggle.”

Get Up, Stand Up performed by Bob Marley & the Wailers

“‘Get Up, Stand Up’ is a song that I have heard at rallies in the streets from Tokyo to Peoria, Illinois. [Bob Marley’s] words and his wisdom are absolutely timeless, and people will continue to get up and stand up and fight for their rights to his music for centuries to come, I suspect.”

“Public Enemy was a news service for African Americans for a decade or more. The timeless lyrics throughout the catalog and particularly in that song — ‘Most of my heroes don’t appear on no stamps’ is all you need to know. It lays bare the real founding principle of this country, which is demand liberty while embracing white supremacy. And Chuck D had the courage to say that into the microphone.”

Highway to Hell performed by AC/DC

“To me it’s a song of heavy metal, headbanging, feral, youthful liberation. It’s middle finger up to the folks. Like, we’re going to rock hard tonight and no one, not even the devil, is gonna stop us.”

“ ‘The Ghost of Tom Joad’  has three iterations: the plaintive minor key acoustic ballad on the Bruce Springsteen record of the same name, the thundering Rage Against the Machine riffy version, and the hybrid version that Bruce and I have played a number of times. [The song is] drawing from the hero of Steinbeck’s The Grapes of Wrath and modernizing it to the struggles of migrants and the downtrodden and the homeless, and the ever-enduring spirit of resistance to injustice that exists in the hearts and minds of people in this country.”

“It told the truth about lynching in the United States and in the horrific Jim Crow era and beyond. And it’s an absolute high point of artistic achievement, with that vocal performance and that lyric and that subject matter, [it] is something should be taught in every American history class, both at home and abroad.”

“It’s the idea that music does not require lyrics in order to be political, and by deconstructing the staid and sometimes stuffy ‘Star-Spangled Banner,’ and reinterpreting it by creating the sounds of the tumultuous late ’60s, from the bombs of the Vietnam War to the street battles in Chicago, through his Marshall stack, Jimi Hendrix showed the possibility of the guitar as a divining rod of truth in revelation.”

“ ‘Bella Ciao’ is a global anti-fascist anthem, an Italian folk song that the anti-Nazi partisans would sing during World War II. It’s not so much known in the United States, but it’s sung kind of everywhere else in the world, at barricades and on picket lines where people are standing up against the fascists.”

One Man Revolution performed by Tom Morello: The Nightwatchman

“ ‘One Man Revolution’ is a song of mine. It’s the first song on my first solo record. I was the only Black kid in all-white town, the only anarchist at a conservative high school, the only spandex-wearing heavy metal guitarist at Harvard University, and then the only Ivy League, Star Trek-loving, Dungeons & Dragons-playing nerd in the world’s biggest political rock-rap band. So that song has served as a kind of personal manifesto since the day I wrote it.”

“That’s just I think one of the greatest anthems of all time, of just like punk feminism, power to the people, destroy the patriarchy with three chords.”

Anarchy in the U.K. performed by the Sex Pistols

“‘Anarchy in the U.K.’ was the song that convinced me to play electric guitar. Until hearing the Sex Pistols cassette I was sure that you needed an expensive Les Paul and a wall of Marshall stacks and a castle on a Scottish loch in order to play rock ’n’ roll. The Sex Pistols taught me you just need a damp basement, and you need to really, really, really mean it.’

With God on Our Side by Bob Dylan

“My list felt incomplete without with some Bob Dylan on it. You can skip American History 101 in college. Just listen to that song beginning to end. You’ll get the picture. The picture is absolutely HD on that one.”