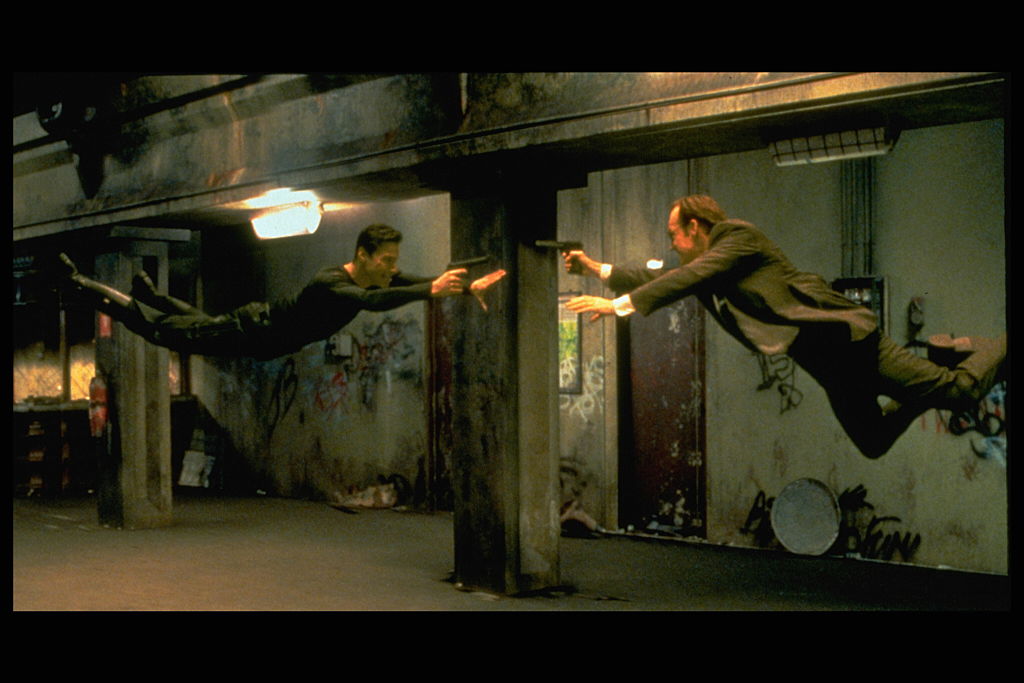 Film and Hip-Hop have a unique relationship being that you can always find a reference to a particular movie in a rap song. One movie in particular that always gets a nod from your favorite rapper is The Matrix.

There is no denying how much of a stranglehold The Matrix has on pop culture. It’s made evident due to the film’s many references in other movies, television shows, cartoons, and music, especially in Hip-Hop. Since the movie’s 1999 release, The Matrix, plus its mind-blowing plot, has found its way into the songs of many rappers over the years.

With Lana Wachowski’s highly-anticipated 4th film in the franchise, The Matrix: Resurrections, right around the corner, you can bet there will be even more Matrix-related bars popping up in new songs. Until we cross that bridge, Hip-Hop Wired decided to highlight the many instances rappers like Kendrick Lamar, JAY-Z, Nas, B.o.B, A$AP Rocky, Common, Nicki Minaj, and more worked in Matrix-related lyrics into songs.

Peep them in the gallery below.

The Compton MC referenced iconic movie franchise in his track “Backseat Freestyle” off his stellar album good kid, m.A.A.d City. On the song, Lamar rapped, “Goddamn I feel amazin’, damn, I’m in the Matrix. My mind is livin’ on cloud nine, and this nine is never on vacation.”

Broken down, it means Lamar is feeling good without a care in the world as if he is still plugged into the simulation like the poor souls trapped inside The Matrix and have no idea what is going on in the real world.

Legendary Queens rapper Nas’s third eye was open while crafting his 2008 Untitled album. On the song “Sly Fox,” Nasty Nas urged his listeners to “unplug” from toxic news or, as he called it, The Matrix doctrine but stay wary of big brother (the government) always keeping an eye on you. On the song, he rapped, “Watch what you’re watching, Fox keeps feeding us toxins. Stop sleeping, start thinking outside of the box. And unplug from the Matrix doctrine. But watch what you say. Big Brother is watching.”

Common was in his bag on his phenomenal album Be. On one of the album’s standout tracks, “They Say,” featuring Kanye West, the Chicago referenced the film’s signature pills putting his own spin on it. On the song he rapped, “The thin line between love and hatred. I’m the black pill in the Matrix, the saturated life. They say life is what you make it. So I wait quick on a spaceship so I can take it.”

A deep dive into that bar, Common is saying blue nor the red pill in The Matrix; he is the black pill: the absorption of all colors combined.

Before he became a notorious flat earther, B.o.B captivated our minds with bars. On his song “The Kids” off his beloved debut album The Adventures of Bobby Ray, he referenced The Matrix. On the song that also features Janelle Monae he rapped, “We’re trapped inside the matrix. Forced to play our hands. We’re filled with so much hatred. The kids don’t stand a chance.”

Broken down B.o.B expresses hopelessness for the state of our culture, especially the youth. We’re stuck with our circumstances as in The Matrix as our negative feelings consume us.

Nicki Minaj also got in her Matrix bag. On the track “Fly” off her album Pink Friday, the Queen used the film to reference dodging all the shots thrown her way. On the song, she rapped, “They got they guns out aimin’ at me. But I become Neo when they aimin’ at me. Me, me, me against them. Me against enemies, me against friends. Somehow, they both seem to become one. A sea full of sharks, and they all smell blood.”

Broken down, Minaj compared her situation to when Neo dodges bullets. She can evade whatever her enemies throw at her. Also, even when Neo was shot, he came back stronger than before.

Even Jigga referenced The Matrix’s “red or blue” pill moment. On the classic grown and sexy track “Excuse Me Miss” featuring Pharrell off his double album The Blueprint 2: The Gift & The Curse, he rapped, “She gets a glimpse of Shawn, and she likes that. He 2-ways her, so she writes back. Smiley faces after all of her phrases. Either she the one, or I’m caught in “The Matrix.” But fuck it, let the Fishburne. Red or green pill, you live, and you learn, c’mon.”

Jay-Z is hoping the woman he likes is the one for him, but if she isn’t, he’s going to let the fish burn, a play on words that references Lawrence Fishbourne acting as Morpheus in the Matrix.

Kendrick Lamar once again referenced The Matrix on the banger “DNA” off his album DAMN. On the song, he rapped, “My DNA not for imitation. Your DNA an abomination. This how it is when you’re in the Matrix. Dodgin’ bullets, reapin’ what you sow. And stackin’ up the footage, livin’ on the go.”

Kendrick relates his life as a rapper. He must constantly avoid trouble, to Neo dodging bullets in the Matrix.

Danny has the cheat codes to life, much like Neo in The Matrix.

J.Cole decided to take a page out of his mentor, JAY-Z’s book with a call back to Jigga’s Matrix-inspired lyric during his guest feature on Janet Jackson’s “No Sleeep.” In the song, the North Carolina rapper spit, “The one swimming through my mind, that was always you. Our time together has inspired a song or two. Or three, or four, or more, mi amor. I’m sure either you’re the one or I’m caught in the Matrix. Staying up for hours while we talk and get wasted.”

J.Cole hopes the object of his affection is truly the one for him, much like Neo is “the One,” but if she’s not, he will have to live out his life in an unsatisfactory world.

Rihanna’s boo couldn’t resist throwing in a Matrix reference in his song “Electric Body” with a nod to the iconic green code Neo sees when he fully realizes his power as The One. In the song, he rapped, “This year, I turned it into the racist. All I wanna see is green faces. All I wanna count is green numbers. Man, that shit is weird, lookin’ like the Matrix

Similar to scenes in which Neo travels through the code of the Matrix, A$AP wants to see green faces and numbers, implying he wants to make money.

Big Sean couldn’t help but point out the fact that both he and Keanu Reeves’s character in The Matrix shares the same last name on the song “Sacrifices.” In the song, he rapped, “I sacrifice for your entertainment boy. I’m Mr. Anderson in the Matrix. Check the last name it’s all facts and the human race is all about pacing.”

Not only is Big Sean feeling impenetrable like Neo, but his full legal name is also Sean Michael Leonard Anderson. This is the same last name as Neo’s real-life persona in The Matrix, Thomas Anderson.