The Marketplace for Getting Celebs to Boost Your TikToks – Rolling Stone 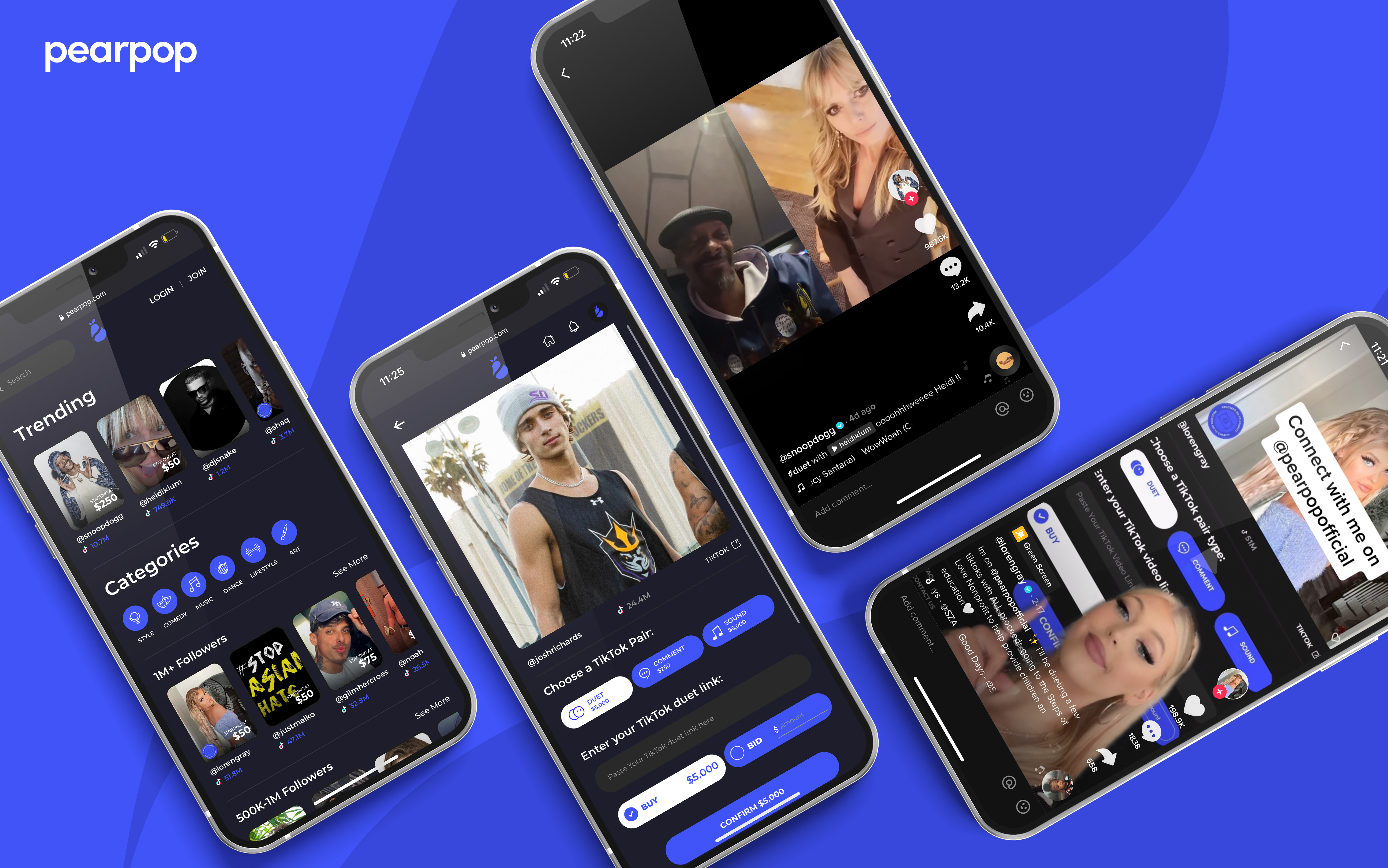 Pearpop, the social media marketplace that allows celebrity TikTokers to to charge smaller creators for different types of engagement on the app, has closed a $16 million funding round, the company announced on Thursday. It successfully courted prominent music artists, athletes, and venture capitalists in the process.

The startup brought on a starry group of angel investors, including The Weeknd, The Chainsmokers, Snoop Dogg, Marshmello and his manager Moe Shalizi, Amy Schumer, Kevin Durant and Mark Cuban among several others. Reddit co-founder Alexis Ohanian’s venture capital firm Seven Seven Six led the round, joined by Bessemer Venture Partners and adding on to the $6 million funding round that Guy Oseary (who’s also listed as a Pearpop co-founder) and Ashton Kutcher’s Sound Ventures co-led last year.

Pearpop is essentially a market between popular celebrities on TikTok and a myriad of other creators — like upcoming musicians or influencers — looking to pay for collaborations or engagement on TikTok to grow their own audiences. Celebrities on the site can charge as they please for comments, song features from the smaller creator, or duet videos. Pearpop currently boasts around 10,000 creators, including celebrities on TikTok like Heidi Klum, Shaquille O’Neal, and Tyga, alongside some of TikTok’s most popular homegrown creators such as Loren Gray, Noah Beck, and Justmaiko.

“The only way to scale your media following is to collaborate with others that have different audiences or more followers, and beyond a select few people living in content houses together, there weren’t many direct ways to do it,” Pearpop co-founder and CEO Cole Mason tells Rolling Stone. “With Pearpop, anyone can collaborate with anyone. We made it possible where you can have a duet made with Snoop Dogg or if you’re an artist, you can have an influencer use your song one click. Now smaller creators can monetize their way up.”

Getting a song in the right influencers’ hands is increasingly valuable in turning songs into hits. TikTok is currently the most influential music marketing tool in the industry, thanks to popular creators turning songs into hits via thousands of videos, creating an earworm effect that then boosts the songs’ popularity on other platforms like Spotify or Apple Music. Most of the songs that make up the Spotify Viral 50 chart on any given day, for example, were popular on TikTok before entering the chart.

Labels have thrown increasing cash toward influential creators to fan the flames on potential hits — and a celebrity’s agent or business team often quietly sets up brand collaborations for them.

But facilitating collaboration for smaller creators who aren’t already famous has been harder, and that’s where Pearpop wants to work. “These types of deals are happening among the elite already, but a lot of people can’t afford to pay the legal fees, reach out to an agent, go through a process where what they can offer to another career isn’t enough value to make it worth that kind of burdensome process,” Pearpop co-founder Spencer Markel says.

Pearpop declined to give financial specifics about its operations but said it’s on track to generate seven figures in revenue this year.

For now, Pearpop only has options for TikTok, but eventually it will work with all social media platforms that facilitate collaboration between creators, the company says.

What the star creators charge the users varies greatly. Comments are typically cheapest, while a duet is more expensive. Many creators on Pearpop are only charging a few hundred dollars for collaborations — while some larger influencers charge significantly more. Beck, for instance, who has nearly 27 million TikTok followers, is charging $20,000 to feature a sound in one of his videos. Loren Gray, meanwhile, the seventh most popular TikToker on the app with over 50 million followers, is asking for $350.

“You can’t just create these viral trends. All you can do is try to reach out to the right people, and then it’s really in their hands to come up with something genius. With Pearpop, it cuts out the middleman”

Alex Pall, one half of EDM duo the Chainsmokers, says the DJs invested in Pearpop due to its potential for upcoming creators looking for a means of scaling upward quicker. The Chainsmokers have invested in several business ventures prior to Pearpop and have their own VC firm called Mantis. Pall declined to give specifics on how much the Chainsmokers invested in the company, but said they invested as much as they were allowed. “You can’t just create these viral trends. All you can do is try to reach out to the right people, and then it’s really in their hands to come up with something genius. With Pearpop, it cuts out the middleman,” Pall says.

He adds: “The management stuff, agency stuff with these creators, it’s so unnecessary. It’s so many hoops to jump through to get to something that you might not even end up wanting when that’s all done. And a middleman doesn’t have to be a person — it could just simply be a message from an upcoming creator getting lost in your DMs and not being able to cut through the noise.  By being able to directly go directly to the source, even if it costs $25, $50, that that can be the aha moment for anyone.”

While record labels or agencies are rarely public about the transactions behind their brand deals or paid engagement tactics, mostly to avoid their artists coming off as inorganic or transactional, Pearpop’s business model is pointedly transactional. Every single engagement feature has a price tag blatantly in front of it. But Pearpop isn’t concerned about the overt cash amounts deterring any deals between TikTok creators. (After all, the app is far from the only one in the market facilitating creator transactions.) Like any other brand deal, founders say, the ones involved in Pearpop ideally encourage creators to pick partners that match their values to keep these transactions from being merely cash grabs.

“This is an opportunity for the creator to vet the person they’re receiving their request from. The control from the creative side and the vibes have to match,” Markel says. “We won’t have people trying to get creators to do collaborations they don’t want to do. I think these are, hopefully, really authentic matches that people create together.”