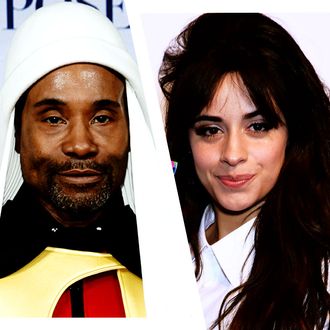 Billy Porter, who plays the genderless “Fab G,” and Camila Cabello, who stars in her film debut. Photo: Getty Images

Like Cinderella trying on a glass slipper, the upcoming Cinderella adaptation will slide right into the slate of films at Amazon Prime. The adaptation began at Sony Pictures, and was at one point set to premiere in July, but Deadline has since reported that Amazon is now acquiring the film, with no new premiere date set. The movie stars pop performer Camila Cabello in her film debut, with a cast that also includes Billy Porter, Idina Menzel, Nick Galitzine, Minnie Driver, Pierce Brosnan, and James Corden, who is also a producer on the adaptation. Porter’s casting previously made headlines for his role as the “Fab G,” a genderless fairy godparent. As for other changes, Deadline called the new adaptation “a musically-driven new take on the traditional story,” blending pop songs and new material by Cabello. Because, we guess, Cinderella as Moulin Rouge! is one of the last new takes on this age-old story. Pitch Perfect’s Kay Cannon, who has plenty of experience with pop music, wrote and directed the film.

This adaptation isn’t to be confused with Andrew Lloyd Webber’s new musical take on Cinderella, with a book by Oscar winner Emerald Fennell and set to premiere on London’s West End later this year. Nor is it not to be confused, for that matter, with Disney’s recent 2015 nonmusical adaptation of Cinderella, starring Cate Blanchett, or Disney’s previous 1997 musical adaptation of Rodgers & Hammerstein’s Cinderella, starring Brandy and Whitney Houston and recently added to Disney+. We’ll start bracing for the Cinderella Live! TV special now.