The Best Music Of May: NPR Staff Picks : All Songs Considered – NPR 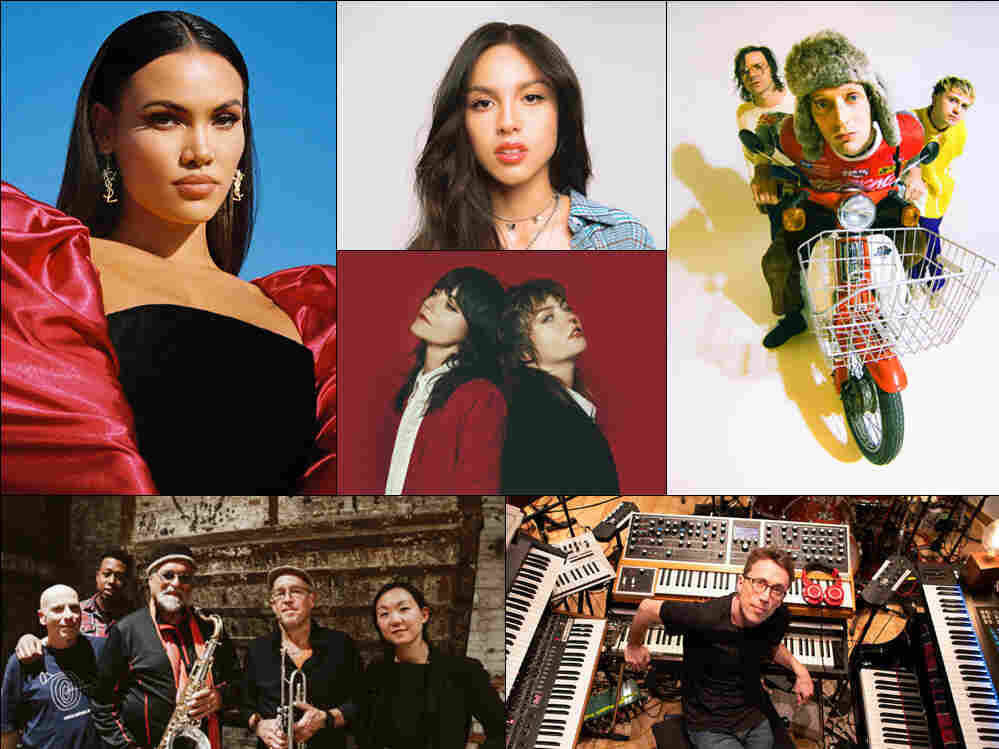 Courtesy of the artists

Courtesy of the artists

Every month, we ask the NPR Music staff: What’s the one song you couldn’t escape? What’s the one album to which you’ll return all year? In May, we swooned to Olivia Rodrigo‘s Sour, marveled at the Sharon Van Etten and Angel Olsen collaboration, went back to the ’90s with The Zolas, bathed in the opulent luxury of Sinéad Harnett’s voice, got lost in Bill Laurance’s piano universe, and jazz group Sound Prints expanded its possibilities.

I had a writing assignment in college where I had to tell the story of a photograph using only what I could observe. Who was in frame? Who wasn’t? What were they doing? What did it all mean? On her debut album, 18-year-old Olivia Rodrigo aces this assignment.

More than the year in which you’re born, I think access to social media in your teenage years truly defines whether or not a person is Gen Z. Scrolling through Instagram, Rodrigo doesn’t have to wonder what her ex is up to — he’s posting about it, and she’s crafted a thrilling breakup album reading between all the pixelated lines. Rodrigo has some quietly brilliant lines — deceptively simple turns of phrase like “I think I think too much” — subtly outlining the problem. But Sour resonates no matter when you were born; if you’ve ever had your heart broken as a teenager — by a boyfriend, a girlfriend, a best friend, or even yourself as your try to bridge the gap between who you are and who you want to be. I guess that’s the irony: even as she grapples with her own self-image, Olivia Rodrigo shows us a songwriter with a clear vision. —Cyrena Touros

Sharon Van Etten & Angel Olsen, “Like I Used To”

With their Jagjaguwar ties and shared inspirations, it’s hard to believe that a Sharon Van Etten-Angel Olsen collaboration hadn’t already happened. But timing’s no matter now: “Like I Used To” absolutely delivers. An unexpected yet sensical crossover from two of today’s most vital and venerated songwriters, it’s a soaring showcase for both artists’ strengths.

In statements shared with Bob Boilen for All Songs Considered, both artists described a mutual respect for the other, and how the collaborative process was generous and open-hearted. “Over the years, I’ve definitely had my ups and downs with competitiveness, or jealousy, or feeling the industry put me up against my peers,” Olsen explains. “Maybe it’s from getting older and finding your confidence and finding your place in it all, but I’m at a point in my life where this is the perfect timing to be putting that past behind me.” The result is an act of true teamwork, neither overpowering the other, with a tangible sense of affection and admiration. —Lyndsey McKenna

The Zolas: “Yung Dicaprio” from Come Back to Life

The ’90s are back. Wide-leg jeans, baggy T-shirts, spaghetti strapped floral dresses — they’ve all made a resurgence, and from the sounds of things, The Zolas are on board. “Yung Dicaprio” sprung from an obsession with the 1996 film Romeo + Juliet, which starred, yes, a young Leonardo DiCaprio. You can see that obsession play out in the very Baz Luhrmann-influenced music video for the song, and you can hear it in the lyrics; unlike the tragic story the song was inspired by, “Yung Dicaprio” is a joyful celebration of being saved by love. While the Zolas are from Vancouver, the track sounds like a new Britpop revival. You can enjoy the ’90s resurgence… even if you don’t want to start parting your hair down the middle again. —Raina Douris, World Café

Sinéad Harnett: “Stay” from Ready is Always Too Late

Like so many of us, Sinéad Harnett spent much of the last year alone. The London-born singer-songwriter was very open with her friends and fans on social media about the mental health toll of quarantine, specifically how she was using music to get through it. Every few days, she’d curl up in the curtains and sunlight of her window sill and serenade her Instagram followers with a Corrine Bailey Rae cover or an a cappella snippet of a song idea she was testing. Now, almost a year later, her latest project, Ready is Always Too Late, feels like a self-actualized level-up — one that was born out of that necessary, albeit jilting, pause. Harnett shows off masterful control on Ready in a way that allows the luxury of her tone to sink in deep. While the project boasts collaborations with stateside R&B stalwarts like Lucky Daye and VanJess, it’s solo songs like “Stay” that allow Harnett to soar highest. —Sidney Madden

Bill Laurance is a multi-Grammy award-winning pianist, and an original member of Snarky Puppy. “Cables Rewired,” a collaboration with The Untold Orchestra, is an immersive cinematic universe. It reminds me of long family drives through the German countryside on partly cloudy days, and driving through tunnels and emerging from the other side to sunbursts over a castle on a sloping hill above a shimmering river. It’s got moments of beautiful swells, cascading piano runs, and such fantastic momentum and build up. Since discovering it at the beginning of the month, I’ve had it on repeat because it’s such a vibe. I recommend that you close your eyes, put on your best headphones and escape into this song. —Nikki Birch

Sound Prints: “The Flight” from Other Worlds

Trumpeter Dave Douglas and tenor saxophonist Joe Lovano originally formed Sound Prints in tribute to a mutual lodestar, Wayne Shorter. That navigational point holds true on their third full album, Other Worlds, without in any way restricting the realm of possibility. Sound Prints — a combustible quintet with Lawrence Fields on piano, Linda May Han Oh on bass and Joey Baron on drums — sounds completely at ease with its risk envelope, and Lovano and Douglas have honed their writing for the group. This is a perfect illustration of the post-bop language evolving through sly creative usage. —Nate Chinen, WBGO