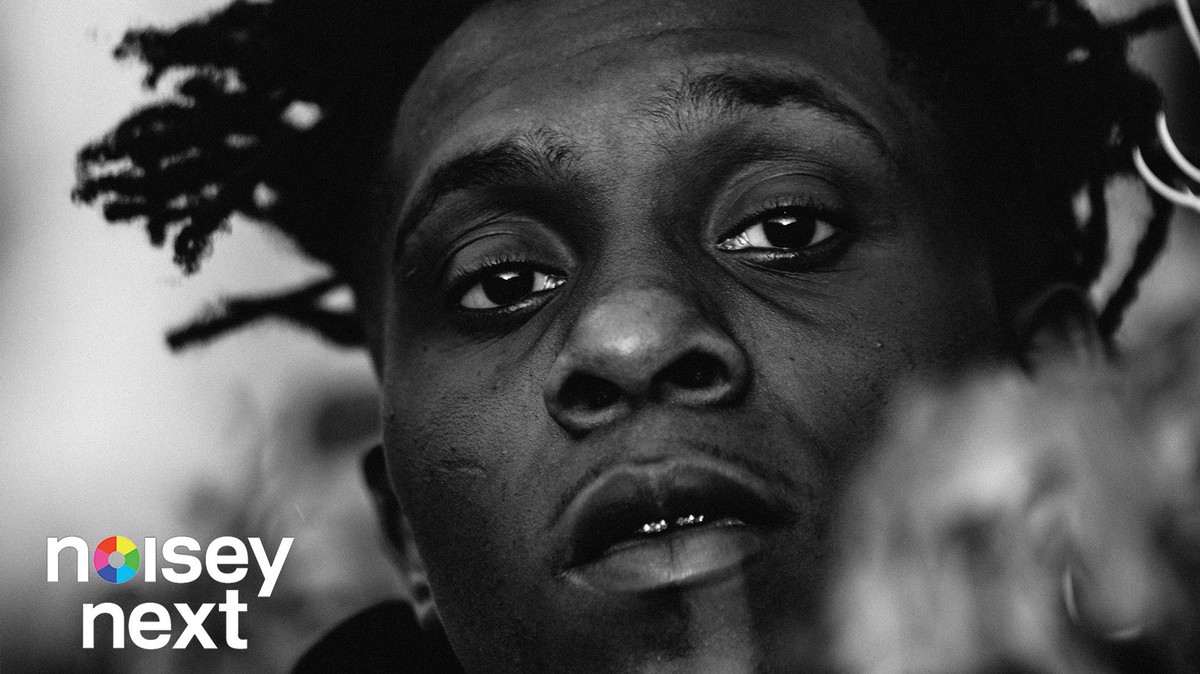 You may not have heard of Taleban Dooda—if you had, you would remember because that is not a stage name one forgets—but you’ve probably seen him. In the past year, the Florida rapper has released ten charmingly chaotic music videos, many of which bring you along for the shenanigans that take place on his block.

“Chopstix,” which was released earlier this month, is his most theatrical video to date. In it, he adopts a persona akin to the leader of a drug cartel—decked out with an open silk blouse and a cigar, calling the shots and firing some too. It’s a guise we have seen other Florida rappers adopt—particularly Miami legends like Rick Ross—but Taleban Dooda isn’t from South Florida. Fallen Angel, his debut album, is a tribute to his hometown of Tampa and its 43rd Street neighborhood, filled with melody-driven raps and vivid street scenes that memorialize life as he knew it before his star started rising—and the people who died before they got to see him make it out.

“Tampa will swallow you if you stay in it too long,” he tells me. He’s talking about how hard it can be for local talent to break through, but he could just as easily be talking about the place itself. “If he talk tough, then he making the news / We some handy-ass niggas, we keep us a tool,” he raps on “Chopstix,” which was produced by Internet Money and tells an arresting story about a man bent on retaliation—by any means necessary.

The 18-year-old’s energy is contagious: As he raps lines like, “Nah, nah, we just made his block hot / 40 make him hopscotch” he sounds like he is literally bouncing off the walls. At times, he even goes so far as to serve as his own hype man, making the “fah fah” noise of the weapons he raps about. In person, he’s just as high-spirited, with wide eyes that light up when you trigger the right memory.

Though minor details about his come-up story seem to slip his mind (dates and producer names are a little hazy), it’s clear that’s because he’s reserved space for moments of greater significance, like the friends he has lost and who live on through his music. He has an awareness of the weight of the stories he shares about his life, both in his music and in his interview with me, that many new artists do not—especially teenagers—and it’s why people gravitate toward his earlier songs like “Dreams & Reality,” “Tru Colors,” and “Dis Dooda,” which feel like street manifestos. So it’s not hard to understand why critics are saying that Dooda is poised to be the chosen one, the artist who pushes Tampa rap into the mainstream: Whatever it is, Dooda has it.

“It used to be jook music that everybody [in Tampa] was good at,” he tells me while meticulously rolling a blunt over Zoom. “A lot of people weren’t doing that pain stuff. It was always a lot of jook music and a lot of twerk music, but I always listened to other cities.” Not to be confused with the Chicago dance music style known as “juke,” jook is to Florida what bounce is to New Orleans or club music is New Jersey or Baltimore: a genre of club music focusing on an amalgamation of bounce, house, and bass elements. And though jook legends like Tampa Tony, Rated R, and Tom G don’t have the same national name recognition as bounce superstar Big Freedia, the style had a hold over the city’s music scene.

“It took a lot of barrier breaking for this shit to be where it is now,” rapper Tom G—known for 2005’s anthemic “City Boy Wit It”, which Lil Duval remixed in 2019—said of Tampa’s burgeoning scene in an interview with Dirty Glove Bastard last year. “And then on top of that, you got social media right now.” With the rise of apps like Instagram and Triller, music fans across the world could tune into a rising generation of Tampa rappers—artists who didn’t have to cater to jook music as their claim to fame.

In other words, you no longer had to be from there to see what was going on. “We got a street side that’s kind of slept on to the world,” Tom G said. In a city known for its retirement communities, its proximity to Orlando’s amusement parks, and even its punk scene, Taleban Dooda was smart enough to use his Instagram to show his 100,000 followers the version of Tampa he knew.

If you wanted to, you could trace the trajectory of Dooda’s career via his online presence. His Instagram page was recently scrubbed, but on YouTube,  you can catch early freestyles from a much younger Dooda back in high school. His commitment to documenting every part of his journey feels reminiscent of an early Soulja Boy, minus the tall t-shirts. But the homemade videos—like this one of him freestyling at lunch tables—are less about orchestrating a viral movement and more about telling his story.

He made a name for himself for singing around his high school, and it wasn’t long before his peers suggested that he should start rapping. “I was playing football, but that football shit—you know how that shit be,” he says.” I was good, but I knew I wasn’t the best. I already knew I was gon’ do two things out of my life: I was gon’ make music or I was gon’ play football.” After weighing his options, he decided to focus his efforts on music, but not without the help of a few early supporters: teachers at school who had picked up on his talent.

Together, Dooda’s teachers conspired to get him into the school’s chorus which, luckily for him, was led by his homeroom teacher. “Everybody would tell [my teacher], He knows how to sing. You need him in chorus,” he says. One day, he was called to the main office. “I’m thinking I’m in trouble, but they changed my schedule, and I saw chorus was on there,” Dooda says. Though he had already been recording quick freestyles, chorus afforded him the opportunity to perform onstage. (In a recently deleted Instagram clip, we see him giving a spirited rendition of “Stand By Me” for his peers.) “Chorus was just an extra blessing,” he says. But even joining the chorus didn’t make school any more enjoyable for him.

“I ain’t really like school,” he says. “I just went so I could make my mama happy, but I was still getting in trouble and shit.” Eventually, he got kicked out of school and tried an alternative school instead. But a pending legal case and afternoon classes made it hard for him to focus on completing his studies. “I had caught a case or whatever, so they was finna put me on probation,” he says. “I was like, Man, what the fuck? I’m not finna go to school if I’m gon’ have curfew at 7 o’clock. I’m not gon’ have no free time, plus this shit holding up the music. So I just said, Fuck it.”

Despite his complicated relationship with school, it provided him with one thing: a built-in audience. “When I first started [recording videos], it was on some shit where it was like, I ain’t got no money to go to the studio, so I’ma record this shit to build my fan base.” From there, he used the network from his school, and other schools in the area, to spread his music. “I got partnas from everywhere, so everybody was reposting my stuff. I got big off that—just from the schools.”

By 2019, rap was looking less like a hobby, and more like a viable career path. “Dreams & Reality,” featuring local rapper Rees Money, was the first official video to premiere on his YouTube page. It gave listeners a look at Tampa from Dooda’s eyes, a cutthroat environment that they might not have even been aware of. “It’s still one thing on my mind, and that is who gon’ die tonight?” he sings. “And Lord, forgive me for my sins, deep in these streets, I’ll be alright.” Dooda and his friends frequent a playground for most of the video; it’s a reminder that despite the heavy gun references, these are still teens.

For Black boys growing up in Tampa, and other cities like it, adolescence can be fleeting—and Dooda’s music zooms in on the growing pains associated with that transition from boyhood and manhood. His breakthrough song “Tru Colors,” released at the top of 2020, put that tension front and center: “Blessed with a gift, but I’m fighting this evil,” he says on the track, which quickly cracked a million views. A few months later, at the height of the pandemic, he signed with Rostrum Records. Now, he’s got a debut album to look forward to.

Something that seems to throw off new listeners is the piercing pitch of Dooda’s voice. “Man I was expecting him to be on some straight drill shit this dude over here singing like Lil Tjay,” said one YouTube commenter. But comments like that are rooted in perception, how people think the 18-year-old should present himself to the world.

“I always got that [criticism], he says. “My voice is deeper now, but even when I was a jit, I had a little voice. But, I ain’t gon’ cap—that’s what makes my shit different.” That voice, which often feels delicate in comparison to the boombastic beats, makes what Dooda sings about, particularly the parts about grief, hit even harder. Though fans won’t be able to listen to the record in full until May, there is a section on Fallen Angel—the songs “Sinning” and “No Libs”—where he memorializes the people in his inner circle who didn’t have the same chances he did: no chorus for them to divest their energy into, no record label to take them out of a less than ideal situation. “I watched my little nigga take his last breath, I’ma always remember,” he says on “Sinning.”

Last night, a post appeared on Dooda’s Instagram account with the words: “Free Taleban Dooda.” His team confirmed he had been temporarily incarcerated for a prior probation violation. The moment felt like a reminder that at 18, Dooda has already seen more than most kids his age. But he’s managed to use music as a vehicle to channel his pain.

“It phased me at a point in time,” he says of the trauma he’s experienced. “But it don’t phase me no more. I’ma win no matter what.”

Kristin Corry is a Senior Staff Writer for VICE.