ROSS THE BOSS: ‘If People Are Not Paying For Music, The Artists Are Just Gonna Give Up’ – BLABBERMOUTH.NET 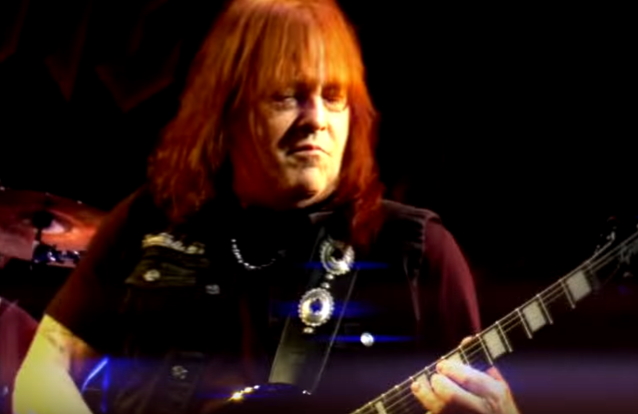 Former MANOWAR guitarist Ross “The Boss” Friedman has urged music fans to support their favorite bands by purchasing their product.

Friedman, a founding member of MANOWAR and THE DICTATORS whose influence in heavy metal and punk is noticeable to this day, addressed musicians’ struggle to survive in a new interview with Rocking With Jam Man.

He said (as transcribed by BLABBERMOUTH.NET): “If people continually are not paying for music, the artists are just gonna give up and not make any more music, ’cause we have to make livelihoods, we have to pay our bills, we have to be able to tour, we have to be able to go around. So if you continue to steal, we’re not gonna make music anymore; it’s just not gonna be worth it. I know a lot of people feel that way. So, buy the bands’ stuff. I’m telling you — otherwise you’re gonna wake up one day and there’s not gonna be any music… It’s not that much money — so if it’s 20 dollars for a CD, or something like that, or a T-shirt, it helps. Every bit helps.”

Speaking specifically about the additional hardship the pandemic has caused musicians around the world, Ross said: “Fans, folks, we love you. We wanna tell you, we wanna be there for you and play for you, but the way to help us is by buying our stuff. That’s the only way to do [it]. And then, of course, when we start playing again, buying tickets. And then we’ll see you. And then you’ll see our happy faces again.”

Ross was one of the pioneers of both punk rock and heavy metal. First crashing on the scene with THE DICTATORS and with such classic albums as 1975’s “Go Girl Crazy!”, 1977’s “Manifest Destiny” and 1978’s “Bloodbrothers”, Ross helped trailblaze punk rock (just to put it all in perspective, “Go Girl Crazy!” arrived a full year before the RAMONES‘ debut, and two years before THE CLASH‘s and SEX PISTOLS‘ debuts). After exiting the band, Ross then co-formed one of heavy metal’s all-time great bands, MANOWAR, which showcased exceptional six-string work on such classic albums as 1982’s “Battle Hymns”, 1983’s “Into Glory Ride” and 1984’s “Hail To England”, among countless other titles.

By the end of the ’80s, Ross had reconnected with his DICTATORS bandmates in MANITOBA’S WILD KINGDOM, which served as a bridge between his love of punk and metal, as heard on the group’s popular 1990 debut, “…And You?” Throughout the remainder of the decade, Ross also played with such groups as THE HELLACOPTERS and THE SPINATRAS, before THE DICTATORS reunited, which resulted in several new releases starting from the late ’90s all the way through the early 21st century. Also around this time, Ross joined forces with former of BLUE ÖYSTER CULT drummer Albert Bouchard in the band BRAIN SURGEONS.

With Ross‘s main focus turning to metal music at this time, two additional projects were launched — DEATH DEALER and his solo outfit, ROSS THE BOSS.