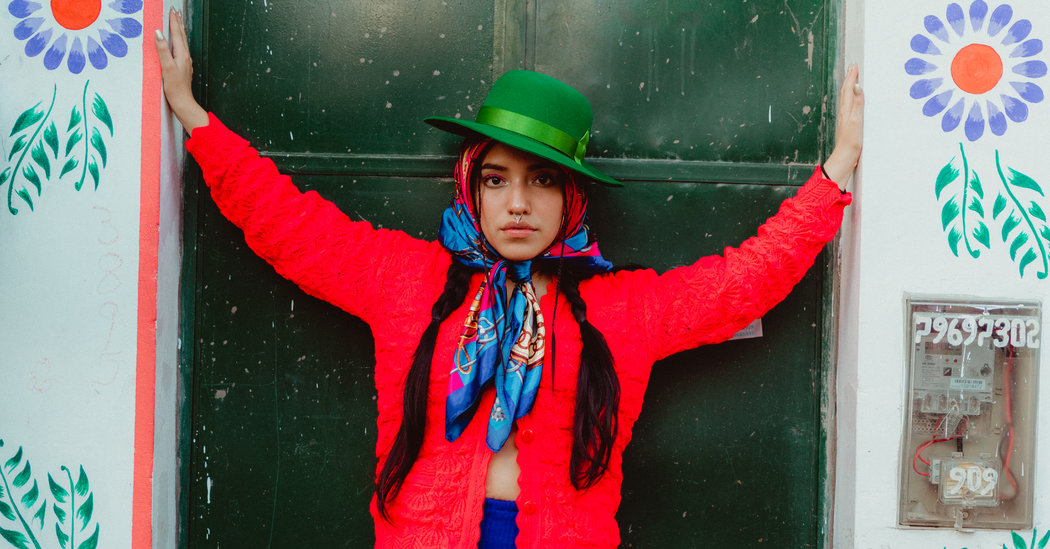 The music video begins with the sweeping views of the snow-capped Andes Mountains and the whistle of the region’s traditional wind instruments.

Then you see Renata Flores. Standing defiantly in the baggy pants, slick ponytail and hoop earrings that have become the uniform of hip-hop artists around the world, she begins to rap — in Quechua, the language of the Incas, whose empire was rooted in these heights.

This blend of traditional and transgressive, rural and urban, local and global, has thrust Ms. Flores, 19, and her music into an intensifying debate over identity in the region, and made her a leader among a new generation of artists producing contemporary music in Quechua, which remains the most widely spoken Indigenous language in Latin America.

In the last few decades, internal migration has transformed Latin America into the most urbanized region in the world, but Indigenous languages — spoken by millions who have moved to the cities — have often been dismissed as the speech of poor farmers and relegated to nostalgic cultural spaces, including festivals and museums.

The message conveyed to Quechua speakers is that their identities are part of the region’s past.

In Peru, artists like Ms. Flores and the promoters of urban Andean music — sometimes called rap Andino or Inka trap — are presenting Quechua speakers as also integral to their country’s future.

“There are people with strong criticism who say, ‘This is an aberration,’” said Liberato Kani, 26, one of Peru’s best-known Quechua rappers, who sometimes hears from people who say the language of the Inca should stay “in the audio in my museum.”

“But if they’re criticizing,” he went on, “it means they’re listening.”

Ms. Flores and Mr. Kani, along with soundmakers like Kayfex, who recently signed with the Warner Music in the United States, are combining the bouncing beats of Latin trap, rap and reggaeton popularized by artists like Bad Bunny with the sounds of the Peruvian countryside.

These include the melodic whistle of the quena, a wind instrument, and the moaning harps and violins used in the country’s most emblematic musical performance, the scissor dance.

Their argument is that there is no better way to become visible than through pop culture.

Mr. Kani’s songs are solidarity anthems that chronicle urban and rural life. “I pray to father mountain for water in my pueblo,” he raps in “Harawi,” meaning “Poem.”

After shows, which have attracted thousands of fans, he is sometimes approached by young artists who want to know how to spin rhymes in their own languages, including Aymara, spoken in Bolivia, Argentina and Peru.

Quechua, which is spoken by an estimated eight million people across at least five countries, was spread across South America by the Inca long before the Spanish arrived.

But there are few instances in which the language is used in media to tackle contemporary concerns.

Her new album, Isqun, or “Nine,” set for release this year, traces “everything that the Andean woman has had to go through, since before and including the arrival of the Spanish to Peru,” over nine songs, she said.

She recorded it at a music school owned by her parents, and directed the production. She is an independent artist, self-funded with the help of foundation and competition money, event payouts and a contract with a shampoo company.

In “Somos Fusión,” a half-Quechua, half-Spanish song about the life of the half-Incan, half-Spanish daughter of the conquistador Francisco Pizarro, she cheekily addresses Rosalía, the Spanish-born pop star who has sometimes been accused of crowding out Latin American artists.

Quechua has survived not only conquest, but the foundation of the region’s independent republics, whose leaders often discouraged the language’s use in an attempt to eliminate Indigenous dissent.

More recently, the language has endured Peru’s internal war, which spanned the 1980s and 1990s and pitted a brutal rebel group called the Shining Path against a sometimes equally violent government — with poor farmers trapped in the middle.

When the violence had subsided, Peru’s truth commission found that 75 percent of the war’s nearly 70,000 victims were native speakers of Quechua or other Indigenous languages.

It was out of that pain that several musicians formed a 1990s rock group called Uchpa, meaning “ashes,” helping to launch a Quechua-language blues-rock movement that became a freedom cry for a generation of Peruvians who had grown up choked by fear.

It is out of that legacy that artists like Ms. Flores and Mr. Kani have arrived, aware of the language’s history, but removed enough from the pain to take on new sounds and political issues.

Ms. Flores lives in the small city of Ayacucho, once the cradle of the Shining Path and the birthplace of Uchpa. Her parents, former members of a Peruvian rock band, are now a hospital administrator (her father) and a music academy director (her mother).

She first captured Peru’s attention five years ago. At age 14, having failed to win a season of an American Idol-style show called “La Voz Kids,” she and her mother decided to take what would have been her champion song, Uchpa’s Quechua cover of the Animals’ version of “House of the Rising Sun,” to the internet.

Soon, her video of the cover was trending on Facebook in Peru. Then came more covers in Quechua: Michael Jackson’s “The Way You Make Me Feel,” (“Chaynatam Ruwanki Kuyanayta”) and Alicia Keys’ “Fallin’” (“Wichichkamuni.”)

Back then, Ms. Flores just wanted to do “something different,” she said. But she began to think about what it meant to sing in the language of her ancestors.

Her own maternal grandmother had been a teacher in rural Peru during the reign of the Shining Path and had told her about the horror of that time. Her Quechua-speaking students had been recruited by the guerrillas and terrorized by the military, her grandmother said. Speaking an Indigenous language made them both the victims of rebel recruitment and the object of suspicion among other Peruvians.

Her paternal grandmother, who grew up in the countryside, never learned to speak Spanish fluently.

Ms. Flores began to wonder why she sometimes felt embarrassed to hear her grandmothers speak Quechua in public, and why so many of her peers seemed ashamed to speak the language in class.

She began to wonder why no one had ever fully taught her the language.

Over time, she started writing her own lyrics, starting in Spanish and then translating them into Quechua with the help of her grandmothers.

Her goal, she said, was to “rescue our culture.”

“Tijeras,” or “Scissors,” her first politically oriented single, was a #MeToo-era rallying cry. “My scream,” she raps, “maybe if I sing it nicely, people will listen.”

“Qam hina,” or “Like You,” released in September, is perhaps her most ambitious project yet and has been widely viewed in Peru.

Américo Mendoza-Mori, a Peruvian scholar of Quechua who teaches at the University of Pennsylvania, offered a translation.

In the song and its video set in the Andes, Ms. Flores tells a story from the perspective of a singer-character whose grandparents disappeared during the conflict.

But as she narrates her grandmother’s story, she also speaks about the girls in rural Peru who spend many hours walking to class each day.

As the song continues, the narrator experiences an unspecified abuse on the long path home from school.

Ms. Flores and her mother, along with a team led by a young filmmaker named Apolo Bautista, produced the video. Local students played themselves as extras and sing the chorus.

“Munani musquyta,” they chant. “I want to dream. I want to learn. I want to speak.”

“She is free and can sing, and we were not,” Ms. Canchanya said. “And she tells it exactly like it is.”