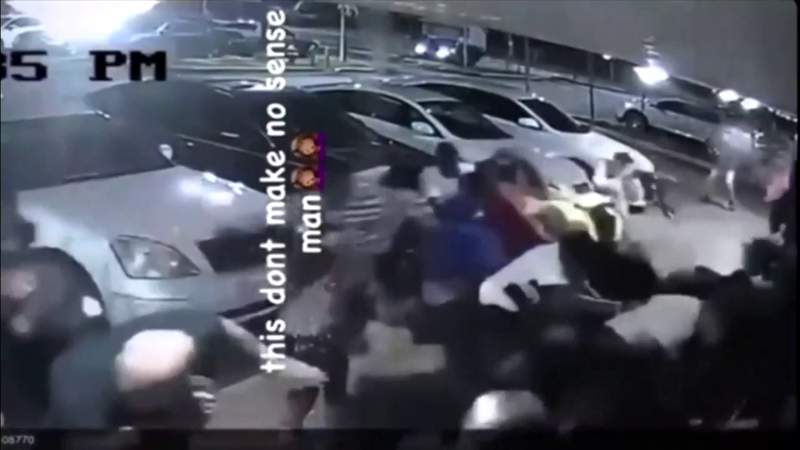 Surveillance video shows they waited patiently for about an hour to drive out of the parking space. Another surveillance camera recorded the driver parked on a side road early Sunday morning next to the banquet hall at 7630 NW 186 St.

“The three males then armed with rifles and handguns exited the vehicle,” Detective Alexandra Turnes said.

On Wednesday, authorities released new surveillance footage that they are reviewing, which shows another angle of the terrifying mass shooting.

The video shows what appears to be a dark colored car with its headlights on, and what looks like flashes of gunfire.

Whether there were actual shooters in that car, or those returning fire in self-defense, it is now part of the investigation.

Other surveillance video shows the crowd outside of the banquet hall. They were waiting to get inside to attend an album release party for Courtney Paul Wilson, 24, better known as rapper ABMG Spitta from Carol City. The armed trio quickly turned calm to terror early Sunday morning.

Everyone there ran for cover except for a man who was wearing red sneakers and fell to the ground in pain. Another man who was wearing a red baseball cap crawled on the floor and used his body to cover a woman who fell between two cars. The front door was riddled with 26 bullets.

“This was a terrifying event,” Turnes said. “We collected over 100 casings. You can visibly see how scared the individuals were while they were running for their lives.”

Video shows the trio ran back to the Pathfinder. It was parked on the side road, which leads to the back of the shopping center and to Northwest 186th Street. They killed two 26-year-old men, police said. Grieving relatives identified them as Clayton Dillard III and Desmond “Des” Owens.

Amid the chaos, some people drove the wounded to nearby hospitals. On Monday, there were 18 injured who remained hospitalized, police said. The victims were treated at Jackson Memorial Hospital, Aventura, Kendall Regional, and Memorial Regional in Broward County.

“We mourn the loss of the two victims and are praying for the recovery of the more than 20 people injured at El Mula Banquet Hall near Hialeah,” Gov. Ron DeSantis tweeted on Sunday. “We are working with local authorities to bring justice to the perpetrators. Justice needs to be swift & severe!”

During a news conference on Monday, MDPD Director Alfredo “Freddy” Ramirez III said the shooting stemmed from the lyrics of a rap song and interactions on social media. He said music videos with “trigger words” prompted “a retaliation.”

Miami-Dade rapper Spitta’s fans prefer gangsta rap, a controversial subgenre that has reemerged through social media platforms for musicians such as SoundCloud, MyMixTapez, and Bandcamp. He mostly raps about fast cash, marijuana, death, and revenge. His lyrics dive into street hustler’s culture.

“We must get these killers off the streets,” Miami-Dade Mayor Daniella Levine Cava said on Monday.

Detectives recovered the abandoned Nissan Pathfinder about nine miles away from the crime scene on Monday. Divers found it submerged in a canal in the area of 154th Street and Northwest Second Avenue. It had been reported stolen on May 15, police said.

On Tuesday, as a memorial with candles, balloons, and teddy bears grew in front of the banquet hall, Ramirez spoke to reporters again from the department’s headquarters in Doral.

“We are on a zero-tolerance posture right now … those that are out there committing gun violence, breaking the law, you are going to go to jail,” Ramirez said. “My officers are mobilized. All the resources of the Miami-Dade Police Department will be on the streets to keep this community safe.”

Miami-Dade detectives are asking anyone with information about the shooting to call Miami-Dade Crime Stoppers at 305-471-8477.

There is a $130,000 reward for information leading to an arrest and conviction in the case. Marcus Lemonis contributed $100,000, the Bureau of Alcohol, Tobacco, Firearms, and Explosives contributed $25,000, and Miami-Dade Crime Stoppers contributed $5,000.