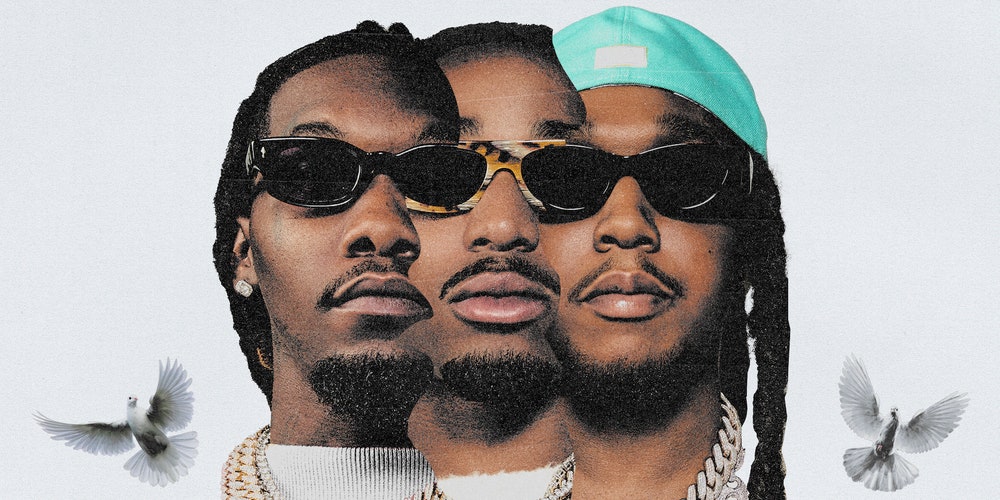 In her 2018 review for Pitchfork, Meaghan Garvey noted that at the time of Culture II’s release, the Migos’ official Spotify profile directed fans not to the album page on that streaming service, but to a 72-track playlist that repeated Culture II three times over. This, like the record’s 24-song, 106-minute runtime, was thought to exploit then-recent Billboard and RIAA rule changes that privileged discrete song streams when measuring album sales and chart performance. (For example, a 60-minute album split into 20 songs would chart higher than a 60-minute album that was split into 15 but streamed the same number of times front-to-back.) The Migos were not alone in evidently bending to these new market forces; by the end of the Obama years, rappers up to and including Drake had bloated their releases past any sense of decency or discretion.

In truth, Culture II contains plenty of acrobatic rapping and buoyant absurdity, though much of this is buried in the data-dump onslaught. So it was fair to be skeptical when a follow-up, Culture III, was announced––a 19-song, 75-minute tome including not only a mediocre collaboration with the Baton Rouge rapper YoungBoy Never Broke Again, which would be 13 months old by the album’s street date, but features from two recently deceased rappers, Chicago’s Juice WRLD and Brooklyn’s Pop Smoke. Fortunately, those latter two collaborations are executed with a respectful touch. (The Juice WRLD song, “Antisocial,” meets the young rapper on his bleeding-heart level, and “Light it Up” is a wholescale attempt to integrate the Migos’ style into the Brooklyn drill sound that Pop Smoke and his go-to producer, 808Melo, helped codify.)

More importantly, both songs reflect what made the Migos exhilarating when they debuted, and durable over the long run: a playfulness that invites experimentation and an underlying earnestness that balances the trio’s goofier, more outre cuts. Like its predecessor, Culture III can become a slog, and at times seems shoddily constructed, its commercial ambitions ill-considered and to the album’s detriment. It’s also girded by songs that recall the Migos’ inspired peak—and a couple that rank among their best.

There are a handful of frustrating misfires. The Justin Bieber-assisted “What You See” is the worst song across any of the three Culture installments, an insipid bit of mopey bullshit, though it’s Culture III’s other foray into Canada that threatens to derail the record before it truly begins. Its second song, “Having Our Way,” cedes its first two and a half minutes to a half-formed hook and verse from Drake, a turn so drab and interminable that it suggests a stolen thumb drive more than an album sequenced by humans. That early lapse is mirrored toward the album’s end, with a four-song stretch (beginning with “Why Not” and continuing through “Time For Me”) that should have been excised entirely.

And yet, what “Having Our Way” and that B-side suite bracket is consistently, sometimes deliriously fun. Take “Jane,” a song whose hook is simply Takeoff rapping “She want a Birkin/I told her ‘Work it’” eight times, recalling the group’s hypnotic beginnings (their 2013 breakthrough mixtape hinges on songs where a single word or phrase––“China Town,” “Versace,” “Hannah Montana”––gets repeated to the point of abstraction). The Future collaboration, “Picasso,” is the most invigorated he has sounded since his January 2019 album The Wizrd, and the eerily metronomic “Modern Day” imagines a club walkthrough as something more sinister. That sense of abandon underscores much of the album’s middle: Despite being one of the more famous acts in pop music over the past decade, with at least Quavo and Offset verging on genuine solo stardom, verses here are often preceded by an ad-lib announcing the next rapper’s name, as if they were eager emerging artists and/or beamed in from 1986.

In the time since Y.R.N., the Migos’ vocal style––that staccato, triplet flow repurposed from old Memphis records––passed into, then out of vogue. The rap records that dominated the late 2010s and early 2020s in Atlanta, and by consequence on national radio, have taken a softer shape. And so, despite their ability to chart at will, the group has been pushed slightly from the genre’s center and recast as technical specialists. (The comparisons to Das EFX were unfair to both Migos and Das EFX, but you can see why they were made.) This suits them. Quavo did not become the breakout star some predicted after “Versace,” but when he barrels into a song the way he does halfway through the Polo G collaboration “Malibu,” he is a revelation: precise but with some bend to his voice, tightly wound but threatening to unspool into something more melodic. As industry reporting goes, the Migos make for dull work. But inside the clumsy, clamshell packaging, there’s still something singular enough to purchase.