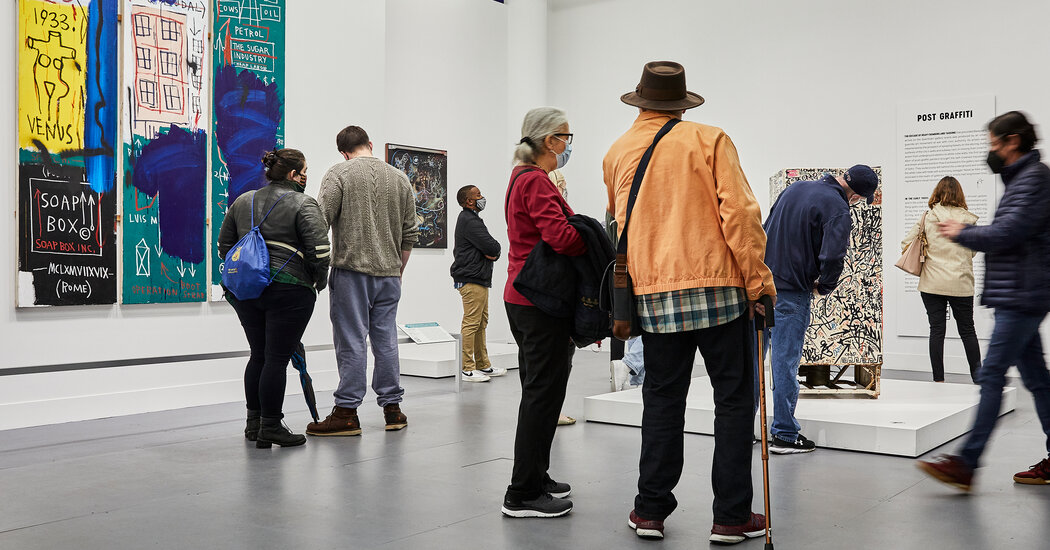 BOSTON — By 1984, 24-year-old Jean-Michel Basquiat had already broken into the mainstream art world. But the onetime street artist still couldn’t shake the legacy of his teenage years spent writing graffiti on the streets of New York City — mostly under the moniker of “SAMO,” which he often used to critique the commodification of art.

“There was really no ambition in it at all,” Basquiat told the interviewer Marc Miller that year in an episode of “ART/new york,” a video series on contemporary art. “It was stuff from a young mind, you know what I mean?”

But the artist was not alone in his teenage pursuits: He was part of a constellation of young graffiti artists who used New York City’s streets and subways as their canvases before going on to take both the art world and hip-hop culture by storm. Their works are the subject of “Writing the Future: Basquiat and the Hip-Hop Generation,” an exhibition on view at the Museum of Fine Arts, Boston through July 25, which charts how Basquiat and 11 other street artists, most of them Black or Latino — Fab 5 Freddy, Lady Pink, Lee Quiñones, Keith Haring, Rammellzee, Toxic, A-One, Kool Koor, ERO, Futura and LA2 — formed the post-graffiti movement in 1980s New York City.

Working across mediums, they made paintings, sculptures, films and music — 120 works are featured in the show — that were inspired by hip-hop’s subversive use of language and blended elements of expressionism, pop art and their own heritages. In bringing their anti-establishment work from the subways and streets to the canvases of the predominantly white art world, they also helped shape hip-hop culture, collaborating with musicians and filmmakers to transport their visions to the international stage.

The post-graffiti movement is “one of the most overlooked but important movements in the second part of the 20th century,” said Liz Munsell, the museum’s curator of contemporary art, who curated the exhibition with the writer and musician Greg Tate.

“There’s been this distinction that’s been made between street art and fine art,” Munsell added, asserting that graffiti influenced the figurative and expressionist painting of artists including Frank Stella and Jenny Holzer in the 1970s and ’80s. “We’re trying to collapse that boundary.”

Given the art world’s attention to how certain white artists influenced Basquiat while all but ignoring his Black contemporaries, his relationships to the show’s other featured artists are also lesser known in mainstream art history — a marginalization that Tate attributes to racism.

“The art world is not interested in rallying around the work of these artists being as important to the conversation around Jean-Michel” as were his collaborations with Andy Warhol and Francesco Clemente, he said. “That emphasis on him having a Black community, a community of color, has never really been highlighted.”

In response to those oversights, Basquiat’s works constitute only 25 of the 120 pieces on view in “Writing the Future,” most of which are drawn from private collections, with a few on loan from museums. Eight of those works showcase, for the first time, Basquiat’s portraits of his peers.

In his 1983 work “Hollywood Africans,” Basquiat depicts himself, Rammellzee and Toxic, their heads floating between the words “gangsterism” and “hero.ism,” representing the ways that Black artists and celebrities were pigeonholed in pop culture. But in his stand-alone 1985 portrait of A-One, and another of Fab 5 Freddy from 1983-84, whose likeness he drew in marker on a ceramic plate, he paints the Black creators whom he called friends as individuals and talented artists.

“He was inserting them in this long lineage of Black cultural producers and people to be remembered,” Munsell said of the portraits.

Munsell’s and Tate’s resistance to traditional art historical narratives through the exhibition’s construction is fitting, given how these artists defied norms of what constituted art and who could be an artist.

Their movement began in train yards and tunnels, where hundreds of teenagers from across the city — known to each other as “writers” — took spray-paint cans to walls and subway cars.

Lady Pink painted in block and bubble letters, a sample of which is on view in her sketchbook featured in the exhibition. In the notebook, she and Quiñones drew the tags of “Rose” and “Zoro,” their respective fictional counterparts whom they portrayed in “Wild Style,” a 1983 film that was hailed as the first hip-hop movie and featured real-life graffiti writers, rappers and break dancers in and around the Bronx. (A 12-minute excerpt from the film is also on view in the exhibition.)

But Lady Pink stood out for more than her signature tags and large-scale subway paintings: She also became the most well-known female graffiti artist of her generation, a feat she attributes partly to the risks that came with sneaking into train yards and evading the transit police’s notoriously aggressive Vandal Squad.

The risks became even more acute after the 1983 death of Michael Stewart, a 25-year-old Black man who fell into a coma and later died after transit officers arrested and brutally beat him for writing graffiti on a subway wall. Stewart’s death inspired Basquiat’s “Defacement (The Death of Michael Stewart),” which is not in the Boston exhibition, but was the centerpiece of a 2019 show at the Guggenheim, curated by Chaédria LaBouvier.

By the time of Stewart’s death, Basquiat and many of the biggest graffiti and street artists had already transitioned to the gallery scene. That move was thanks largely to Fab 5 Freddy — born Fred Brathwaite — who credited his teenage years spent wandering museums with Basquiat.

“I developed this relationship with the idea of art in a museum context,” Brathwaite said. “There was a whole underground world,” he added, that people in the art establishment “knew nothing about. I felt like we could make strategic moves.”

The first was to a 1979 exhibition in a gallery in Rome showing Brathwaite’s and Quiñones’s graffiti works on canvases. Interest from the American art establishment followed, starting with a landmark 1980 exhibition in Times Square. Held in an abandoned bus depot and massage parlor, it showed the works of more than 100 other street artists, including Basquiat, Brathwaite, Quiñones, Haring and Holzer.

Dozens more national and international shows took place through the mid-1980s. And as the artists became known in the downtown New York City art and club scenes, their fame transcended gallery walls and infiltrated the music and films that documented hip-hop culture.

Basquiat, Brathwaite and Quiñones appeared in the 1981 music video for Blondie’s “Rapture,” which is in the Boston exhibition. And two years later, “Style Wars,” a documentary about the roles of graffiti and break dancing in shaping the city’s burgeoning hip-hop culture, was released. (Excerpts from the film greet visitors to “Writing the Future.”)

To many young artists in the post-graffiti movement, the attention — and the money it brought — came as a surprise.

“We were just having fun as kids, and then it went above ground and folks started giving us loads of money for doing the same thing we were doing underground,” Lady Pink said.

But the legacy of their work lives on: Lady Pink and Brathwaite both trace their generation’s impact to the popularity of contemporary street artists like Banksy.