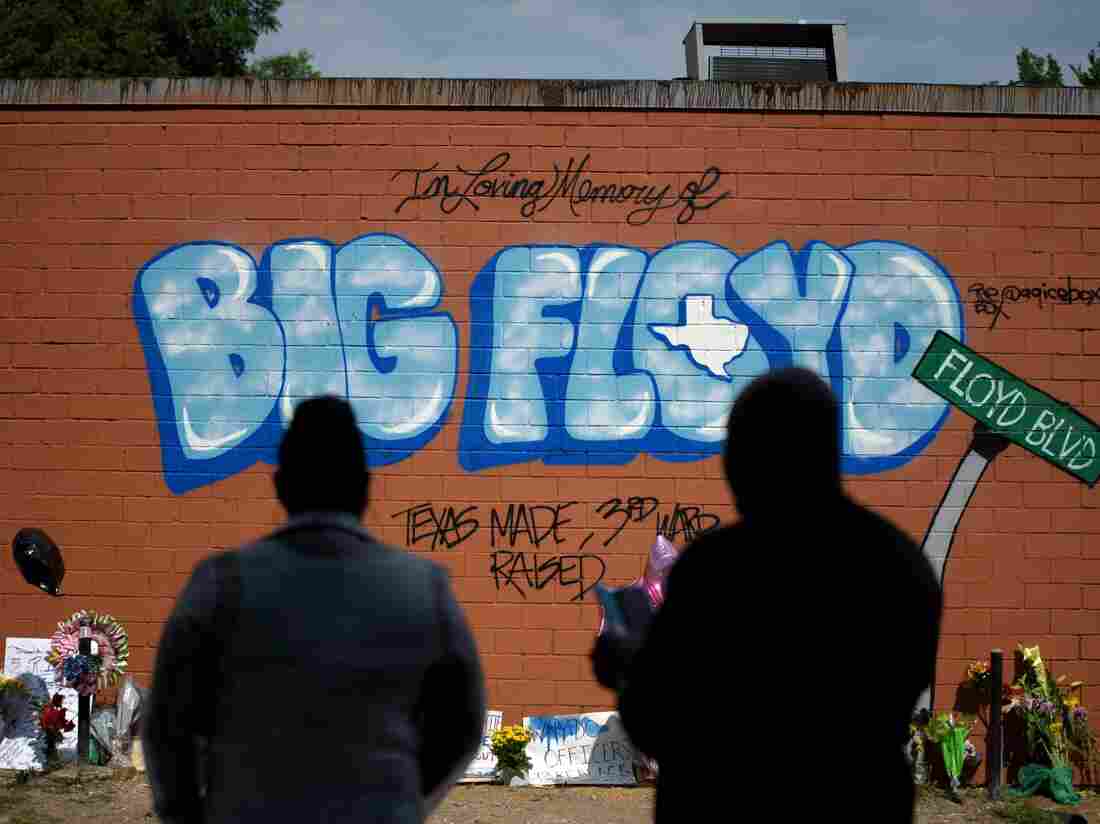 A mural memorializes George Floyd is his hometown of Houston, where he was known as Big Floyd, and part of the city’s hugely influential Screwed Up Click rap collective. Mark Felix/AFP via Getty Images hide caption

A mural memorializes George Floyd is his hometown of Houston, where he was known as Big Floyd, and part of the city’s hugely influential Screwed Up Click rap collective.

George Floyd was buried in his hometown of Houston, Texas, this week. Floyd left his mark on the city through his friends and family, but also through the music he made under the name Big Floyd.

George Floyd grew up in Houston’s Third Ward — the home of the city’s hip-hop and rap scene. Floyd used to spend hours in producer DjD’s home studio, making the kind of slow-the-music-down form of rap made famous by the late DJ Screw, who also knew and worked with Floyd.

Houston’s chopped and screwed scene, as the genre is called, is a lesser-known but proud one. It seems like everyone who’s part of it loves to rep their city, including Houston’s most famous native.

“Beyonce is from the Third Ward. She shouts it out every chance she gets,” music writer Kiana Fitzgerald says.

Fitzgerald is another Texas native. She knew Floyd’s music and says that the news of his death was particularly devastating for people around the scene because of how much loss they have experienced already.

“When the connection was made about George Floyd being a member of the Screwed Up Click, even tangentially, I was just like, ‘No, this cannot be happening,’ ” she says. “Because we’ve lost so many people already in the Houston scene, in S.U.C., leading with DJ Screw. It was just a gut punch.”

Fitzgerald says after she made the connection, she immediately went to listen to some of Big Floyd’s music.

“Me and my sister, the first thing we did was hop up, get in the car and listen to his tapes. And I was just like, ‘I wish that I had been able to appreciate this when he was alive,’ ” she says. “Big Floyd was just a big, affable character. I think you can hear it in its freestyles: He just loved to have fun. He loved to joke around. And he was also pretty serious on the mic as well. He was someone that wasn’t afraid to talk about what was going on in his life.”

Music played a huge role in Floyd’s life: There was the screw-top music, but also Christian hip-hop, which friends say Floyd listened to a lot. Ronnie Lillard, who records Christian hip-hop under the name Reconcile, got to know George Floyd through the presence of his church in the Third Ward. He says that though the genres are radically different in terms of content, there was a real connection between the two forms of hip-hop that Floyd loved.

“Christian hip-hop’s DNA in Houston has a lot to do with the Houston rap culture and screw music. If you took it out to the streets and it didn’t sound like screw music, nobody wanted to hear you,” he says. “We had found a way to blend street culture with redemptive stories about change and the gospel of Jesus Christ. Just like you got guys who rap about doing negative activity and they feel like they had to actually be what they’re rapping about, we’re actually being what we’re rapping about, and that’s advocates of change in the city.”

A song Lillard says sums up that connection is “Never Would Have Made It.” It’s a Christian rap song, and they shot the music video in the Third Ward.

“We actually shot that in Cuney Homes Projects, right in the middle of the court. It sounds like the most Houston music you can make,” he says. “You’ve got the organs, keys, because that was the sound of Texas rap. You’ve got that church influence.”

When he’s not recording, Lillard also works in ministry with youths in juvenile detention in Miami. He says that Floyd’s attempts to rebuild his life after his own incarceration were exactly what he tries to help young people do.

“Floyd coming out of jail and changing his life and becoming somebody who was a beacon of light and hope and refuge and a mentor and everything that he became, that’s what we pray to see happen to young men,” he says. “So for him to be cut down as he’s blossoming in that — it’s very disheartening.”

Fatma Tanis and Arezou Rezvani produced and edited the audio of this interview. Jon Lewis adapted it for the Web.