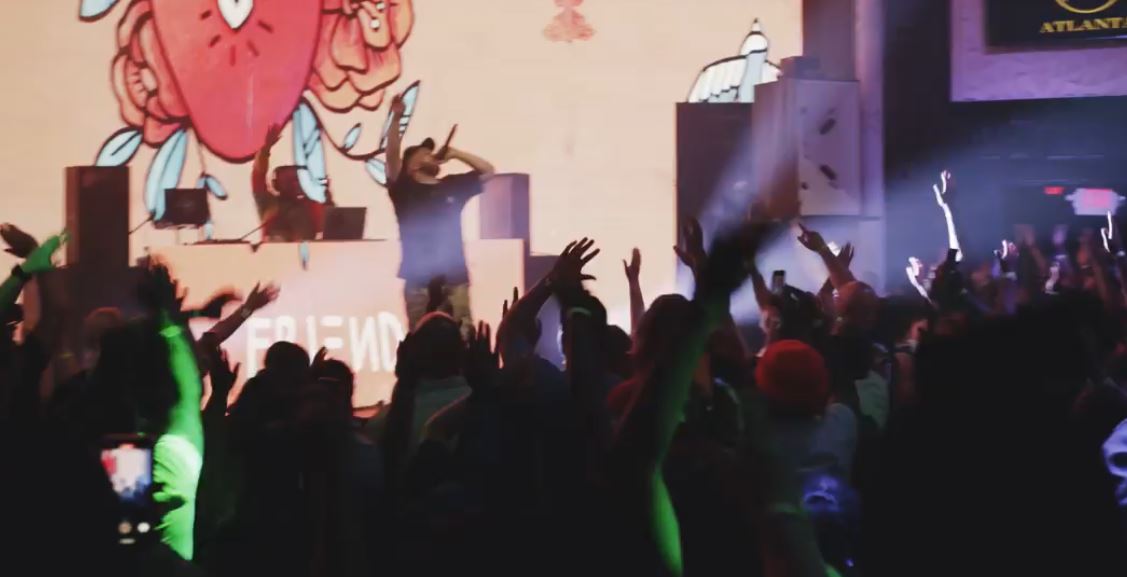 The first church service at a new Hillsong Church location in Atlanta introduced a new sound to congregants, true to the city’s roots.

Worship at the Atlanta Event Centre, formerly Club Opera in the heart of downtown Atlanta, kicked off with some hip-hop praise.

Black folding chairs and gold-seated booths provided seating for the diverse crowd in attendance. Some congregants were masked as they cheered for Sam Collier, the first African American lead pastor for a Hillsong church.

“I guess I need to know if anyone who loves Jesus is in the building?” Collier says, opening the service. “Lift him up! This is our grand opening!”

Collier was a pastor previously in Atlanta at Ebenezer Baptist Church, the home church of Martin Luther King Jr., and New Birth Missionary Baptist Church, another well-known Black church in the metro area. He came to Hillsong from Andy Stanley’s North Point Ministries.

In 2018, Hillsong formed its own denomination and now has locations in 28 countries and about a dozen American cities. It boasts a global attendance of about 150,000 a week, according to its website, and a number of celebrities are known to attend their services. Their new Atlanta location is Hillsong’s first in the southern United States.

This Hillsong church, however, will be different from the contemporary hipster vibes other locations are known for. Hillsong, known for its powerful and exciting worship, will be switching up their sound in Atlanta to worship during Sunday services with gospel and hip hop music.

Christian artists, including Lecrae, Andy Mineo, and Natalive Grant, have been involved in worship hights drawing thousands in person an online leading up to the church’s launch on June 6.

Collier introduced Hillsong Church global senior pastors Brian and Bobbie Houston to the Atlanta congregants during the opening service, calling them “the greatest leaders I’ve ever met.” Collier and his wife also thanked their relatives and “global family” Sunday for the support they’ve received.

Sharing their vision for the future of the Hillsong church in Atlanta, Collier referenced Exodus 3:7, calling for revival and racial reconciliation — an especially prominent message, given Atlanta’s civil rights history. Martin Luther King, who would go on to lead the American civil rights movement in 1955 was born there in 1929.

“God is talking to Moses about his own people in captivity. He invites Moses into a solution. He told Moses, I need you to go and free the people. Because of Moses’ sacrifice, he sets the captives free,” Collier says during his sermon.

“God is inviting us into revival where Black and white and political divisions will go away. We’ve been separate for too long, every race, every political affinity. We love the same Jesus and therefore we should be together. We should be unified about being unified especially in the city of MLK. What started in Australia will continue here.”

Terran Gilbert, a Christian rapper known as T-Ran, attended the opening service to support Da’ T.R.U.T.H. He says he likes that the church hasn’t strayed from the culture of Atlanta or the culture of hip hop.

Grammy Award-winning gospel artist Jonathan McReynolds performed during the June 6 service and Brian Houston spoke about the early days of Hillsong’s founding in 1983 when the church was based in the Sydney suburbs.

He also encouraged those in attendance, calling them pioneers at the beginning of an amazing journey.

“Thank you for what you’re about to do here. Pray that the Holy Spirit will move in a fresh way in this city and reach people who have never been reached before.”

Some are critical of Hillsong and its influence. Over the past year, Hillsong pastor Carl Lentz resigned after admitting to an affair and leaders at locations in Dallas and New Jersey also stepped down. The church is currently reevaluating its policies around abuse.

Some worry the Hillsong brand will draw celebrity attendees and further gentrification in Atlanta.

The church, however, has remained a household name in the worldwide Christian community and continues to be a force, particularly known for its worship among believers. Attendees like it’s global, multiethnic, and multigenerational appeal.

The Atlanta location will begin it’s eight-week series, “Launch,” tomorrow, and will meet each week with two Sunday services.