‘Different Way of Fighting’: Lyrics Are the Weapons of All-Women Roma Band – The New York Times 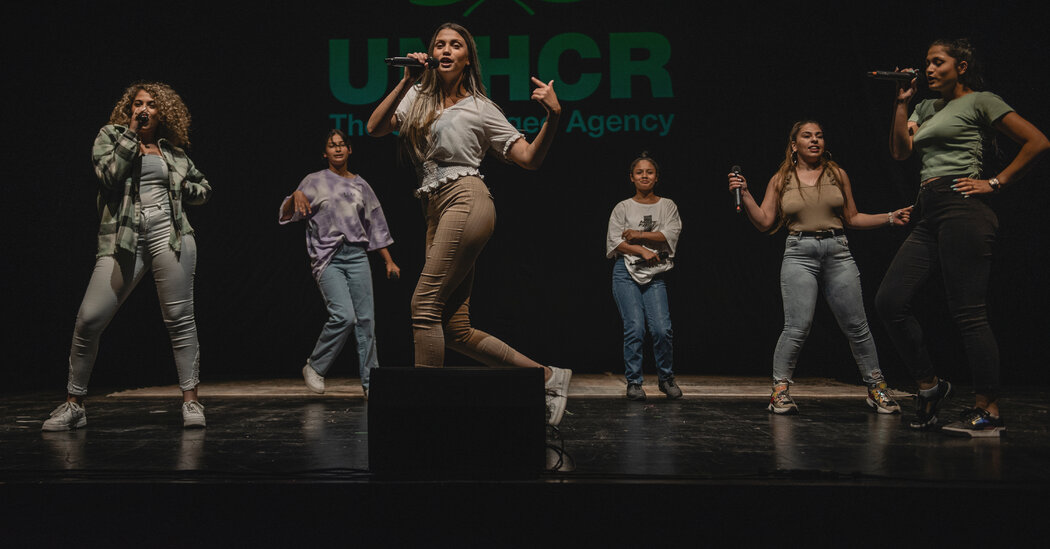 Many Roma women face pressures to marry young and take on traditional gender roles. Pretty Loud, a hip-hop group from Serbia, wants girls to decide for themselves.

By Laetitia Vancon and Isabella Kwai

Photographs and Video by Laetitia Vancon

Their lyrics focus instead on the pains Roma women experience: marrying and having children too young, feeling like second-class citizens and not finishing high school.

“Don’t force me, Dad, I’m too young for marriage,” the six members, who hail from Serbia and are in their midteens to late 20s, sing in one song. “Please understand me, or should I be quiet?” they rap in another. “No one hears when I use my Roma girl’s voice.”

Persecuted for centuries, many Roma people in Europe — the continent’s largest ethnic minority — live in segregated communities with limited access to amenities and health care. Women and girls also face gender expectations like being wives and mothers at a young age, which some say cause stress and isolation.

“They are taught when they grow up that they will get married, cook and raise kids, but we want to change this,” Silvia Sinani, 24, said of Roma girls, adding that such expectations made it hard for women and girls to finish their educations.

One of the band’s goals is to show there is another way. “We want every girl to decide for herself,” Ms. Sinani said.

The women of Pretty Loud are hoping their music, authenticity and visibility as performers — already rewriting social conventions in their community in Belgrade, the Serbian capital — can help women and girls elsewhere find their own voices. Formed in 2014, Pretty Loud has danced, sung and rapped on stages across Europe.

“It is a different way of fighting,” Zivka Ferhatovic, 20, a band member, said of her activism. “We fight through the music and songs.”

She added that the group wanted its fusion of traditional Roma music and Balkan hip-hop to confront the everyday realities of many Roma women — be it domestic abuse, sexism or racial discrimination. In one song, they warned that marrying someone abusive would not bring happiness. In another, they addressed their experiences of discrimination.

Music was an obvious medium for the band’s members to express themselves and to continue celebrating the signature sound of Roma music.

When she’s performing, Ms. Ristic, said, “I feel like the strongest woman in the world.”

Pretty Loud began as a project of GRUBB, an organization running educational and artistic programs for Roma youth in Serbia. On a summer afternoon, they rehearsed for a performance in front of the distorted mirrors at GRUBB’s center in Zemun, a neighborhood in Belgrade where many of the city’s Roma people reside.

Fearing social stigma, the band’s members were initially reluctant to write songs and perform. But others involved with GRUBB helped them to focus their writing and performance on personal experiences.

Over time, they grew more comfortable with the idea of melding the personal with the artistic. One performance used a silk sheet with a red spot to theatrically recreate the ritual of inspecting sheets after a wedding as a way of “proving” the bride’s virginity.

“It became very poetic,” said Serge Denoncourt, a professional artistic director and longtime volunteer who said he encouraged them to explore the power of art. “They understand there you can talk about anything if you have a way to talk about it.”

“The whole point of the music is to help them use their voice, not to speak for them,” said Caroline Roboh, a founder of GRUBB. Nowhere is this more apparent than in Pretty Loud’s own community, where members have become role models, a point of pride for them.

“Little girls, they come to me and say: ‘Bravo, I want to be like you one day,’” Ms. Sinani said.

Even outside their circles, they are amassing supporters who say the group is sending a modern message that Serbia needs to get behind.

“Their energy breaks through the walls and spreads love,” said Joana Knezevic, a Serbian actress who watched a recent Pretty Loud performance. “They are women who have something to say.”

It is a message that Ms. Ristic, who brings a cheerful energy to the group’s dynamic, learned early on. At 16, she got married and, soon after, pregnant. When the union broke down and she confronted being a single mother, Ms. Ristic became depressed. Raising her son, who is now 11, was like having a “baby doll,” she said. “We grew up together.”

Now, she wants to set an example for women who are unhappy in their marriages, even if they fear raising children alone.

“I know when they are divorced, they think their lives stop,” Ms. Ristic said of women. “But I want to show they can continue with their dreams.”

It is sometimes a difficult balancing act for members of Pretty Loud, who are trying to live the messages they preach. Some work at Grubb while holding other jobs; others, like the group’s youngest members, Elma Dalipi and Selma Dalipi, 15, are still finishing high school.

“We’ve had numerous offers for marriage, but we never accepted any,” said Zivka Ferhatovic of her and her sister, Dijana Ferhatovic, 19. Their determination to finish school is supported by their grandparents and has a personal motivation — they believe their mother, who had her children young, ultimately left the family, in part, because she married too early.

After one of Pretty Loud’s most recent performance, the cheers made Dijana Ferhatovic’s chest tighten, she said. “We’re really doing something,” she added, though she called it a small step.

Her sister disagreed. “How can you say it’s small?” Zivka Ferhatovic said.

The coronavirus pandemic has slowed the band’s activity, and existing inequalities left Roma people in Europe particularly vulnerable to it. (Many of Pretty Loud’s members contracted Covid-19.)

Over the summer, as borders reopened in Europe, Pretty Loud again took to stages: to cheers at a United Nations event celebrating refugees, under blue lights in Slovenia, at an audition for a Croatian talent show. And the bandmates have more dreams: of making a real demo for an album, performing in Times Square, writing a book about their lives — perhaps even entering politics.

Though not yet household names or able to make a living solely from their music, the band is beginning to attract wider European attention. Earlier this month, a video of their successful audition for that Croatian talent show drew 120,000 views.

Ms. Ristic, now a dance teacher at GRUBB, wants to grow her followings on TikTok and Instagram, where she posts Pretty Loud performances. Though it has exposed her to racist and sexist comments, she won’t stop posting, she said.

“I don’t delete them because it’s not my shame,” she said, adding: “This is how people treat us. I want to show why we fight.”

In the future, Ms. Ristic wants to try just about everything: getting her license and then driving a truck while smoking a cigarette, making music with Serbian artists and raising her son, she said, with strong Roma role models so he grows up respecting women.

Most of the members of Pretty Loud say there is still room for romantic love, children and marriage in the future — so long as they get to choose when. But after one marriage, Ms. Ristic has seen enough.