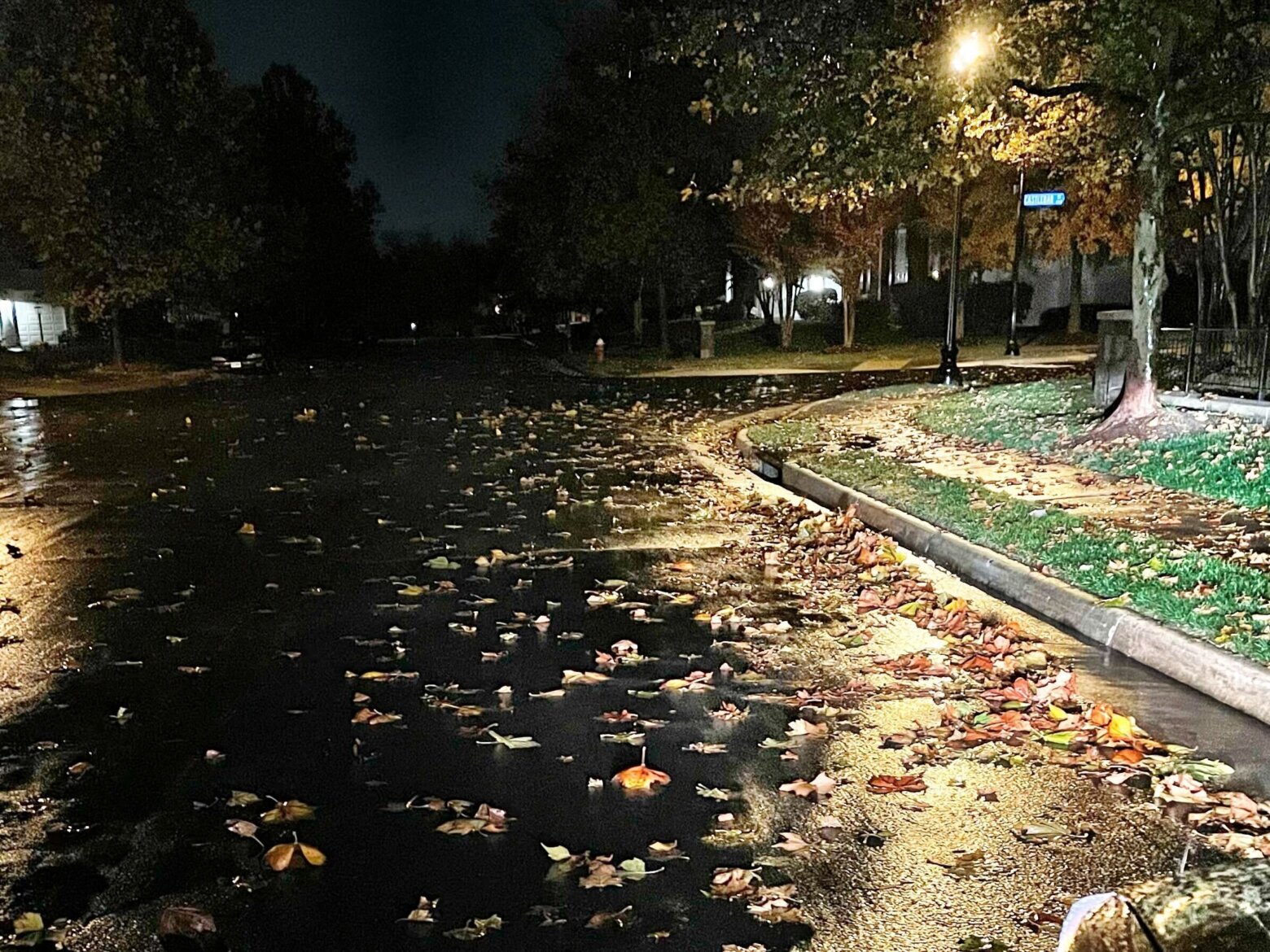 The worst of Friday’s weather is moving east of D.C. toward the Chesapeake Bay with heavy rains and thunderstorms impacting the morning commute with slick roads. Here’s what you need to know.

Storm Team4 Meteorologist Chuck Bell said the storm will be heavy until 7 a.m. and drivers should consider delaying their commute if possible.

WEATHER ALERT: Heaviest rain now East of DC and heading for the Bay. Light/moderate rain will continue for the next few hours. Wet roads and wet-leaf covered sidewalks are slippery. Be careful as you get out and get your day started. Sunshine back by lunch. @nbcwashington pic.twitter.com/TnPPyXw3U7

WTOP’s Neal Augenstein reported heavy rain that was at times “torrential” with breaks between showers in the 5 o’clock hour Friday morning.

“That means the leaves that you raked are being blown around, and those still on trees are falling,” Augenstein said. “Lots of wet leaves on the roads mixed with periodic ponding in puddles.”

Give yourself some extra stopping time this morning. Heavy rain and wind means leaves you raked are being blown around and falling. Kids at bus stop in the dark. Safe travels, all. @WTOPtraffic @WTOP pic.twitter.com/Ffjqxc6XIb

The National Weather Service has also warned of strong wind gusts that may build up to 25 mph in portions of the D.C. area.

Showers (some locally heavy) are starting to overspread the area. This will continue through the late morning/early afternoon hours before clearing follows soon after. A rumble of thunder is possible along with isolated gusty winds with this cold front passage. pic.twitter.com/d4D7kfS6dw

The heavy rain and winds will continue through the morning’s rush hour, accompanied by patchy fog and some thunderstorms. So plan your commute accordingly — and drive safely.

“Definitely gonna be a wet one and we’re going to see a lot of slick roadways with all the leaves on the ground so heads up for that,” Storm Team4 Meteorologist Doug Kammerer said. “Give yourself a little bit of extra time and take that umbrella.”

Excluding Southern Maryland where the storm is expected to last longer, Friday’s precipitation should end before noon, as the sun comes out and temperatures peak in the mid 60s by afternoon. There will be a slight chance of showers during the day.

Wind and high waves are possible near the Chesapeake Bay in Maryland.

With slick roads, there were three crashes on the Beltway Friday morning before 6 a.m. WTOP Traffic reported a crash involving a jackknifed tractor trailer on the Inner Loop of the Beltway that stopped all traffic for over an hour.

Maryland State Police said no one was hurt in the crash and cars are getting by on the third lane and the shoulder. The truck should be cleared by 7:45 a.m.

Over the weekend, expect to see partly sunny and breezy conditions. Temperatures will be more seasonal, dropping to the mid 50s during the day Saturday, and down to the upper 40s with possible showers by Sunday.

“Friday night football games and Saturday morning soccer practices will be chilly and dry with temperatures in the 40s,” Bell said.

Highs on Saturday will be in the low 50s during the late morning as winds and afternoon showers will lower the temperature throughout the day.

By Saturday evening, skies will clear and temperatures will drop into the 30s by Sunday morning. Temperatures Sunday will barely reach 50 degrees.

Friday: Rain, possibly heavy at times, ending before noon. Breezy, sunny and mild in the afternoon. Highs 65 to 70.

Saturday: Partly sunny, breezy and cooler. Chance of afternoon showers and a breeze. Highs in the mid to upper 50s.

Monday: Partly sunny and chilly. Highs in the upper 40s to lower 50s

Get breaking news and daily headlines delivered to your email inbox by signing up here.

© 2021 WTOP. All Rights Reserved. This website is not intended for users located within the European Economic Area.