Before the Astroworld Tragedy, Travis Scott’s ‘Raging’ Made Him a Star – The New York Times 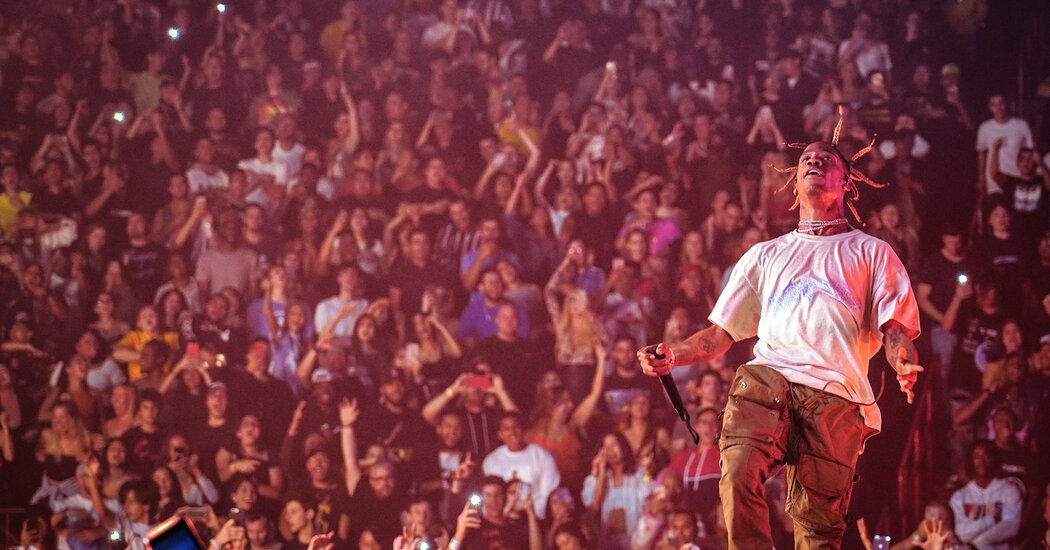 Travis Scott has always been a showman first and foremost.

A master of marketing who is equally skilled at curating big-name collaborators and exclusive experiences, Mr. Scott is a figure of few words and little eye contact who isn’t known as a technically adept rapper or a dynamic offstage celebrity. Instead, he has built his multiplatinum, widely licensed name as an avatar of excess and a conductor of energy — an electric live performer who prioritizes how his music makes you feel (and act).

Since 2015, when he established himself as a reliable concert headliner, Mr. Scott (born Jacques B. Webster) has gained an international reputation as a star attraction and an evangelist for good-natured physical expression — what he calls “raging” — whipping up mosh pits, crowd-surfers and stage-divers as his shows teeter on the edge of mayhem. In a rare trajectory, the smash hits came only later.

“The way he interacts with his crowd, he’s one of the only artists that when he comes on, he can vibe with every single person,” one fan explained in the Netflix documentary “Travis Scott: Look Mom I Can Fly,” from 2019. Amid montages of blood, sweat and colliding bodies, another added: “You can fall and everyone will pick you up. It’s weird how one person’s music can turn everyone into such a family.”

Such expressive, loosely choreographed rowdiness — a common and longtime feature of live performances across musical milieus, including metal, punk and ska — does not necessarily equate with mass danger.

But Mr. Scott’s attempts to balance a kind of community-based catharsis with the powder keg of a rambunctious young crowd — which has led to accusations that he has incited fans and encouraged unsafe behavior — tipped decisively toward tragedy on Friday night in Houston, where eight people were killed and hundreds more injured as the rapper performed the final set of the night at the third iteration of his Astroworld festival.

Authorities are still investigating what caused the surges in the audience of 50,000, and how that contributed to the “mass casualty event,” which lasted for an estimated 40 minutes, according to law enforcement. The Houston police chief, Troy Finner, said officials worried that ending the show sooner could have caused a riot.

Mr. Scott said in a video statement on Instagram that despite acknowledging an ambulance in the crowd, he did not realize the extent of the emergency. He noted that he typically halts his concerts to make sure injured fans can make it to safety, adding: “I could just never imagine the severity of the situation.”

Representatives for Mr. Scott said on Monday that he would cover all funeral costs for those who died at Astroworld, while also providing refunds to all attendees who bought tickets. The rapper has also canceled his upcoming headlining appearance on Saturday at the Day N Vegas festival, they said.

While crowd-control disasters have occurred at rock concerts, religious celebrations and soccer matches, the incident in Houston has quickly turned Mr. Scott’s biggest selling point and foundational philosophy as an artist into a flash point about his culpability after years of encouraging — and participating in — extreme behavior by his fans.

Twice before, Mr. Scott has been arrested and accused of inciting riots at his concerts, pleading guilty to minor charges. In an ongoing civil case, one concertgoer said he was partially paralyzed in 2017 after Mr. Scott encouraged people to jump from a third-floor balcony and then had him hoisted onstage.

Yet those incidents only served to bolster the legend of the rapper’s live shows, with footage of stretchers, wheelchairs and the daredevil stunts that may have necessitated them — like leaping from lighting structures — used to illustrate Mr. Scott’s roving carnival of a career.

By Sunday, however, an official commercial for this year’s Astroworld festival that emphasized such imagery had been removed from YouTube.

Mr. Scott, a Houston native who dropped out of the University of Texas to pursue music, became a protégé to Kanye West in 2012. Using Mr. West’s inclination toward cultural pastiche, along with the genre-hopping, fashion-forward templates of artists like Kid Cudi and ASAP Rocky, Mr. Scott quickly emerged near the forefront of a micro-generation of rappers — Playboi Carti, Trippie Redd, Lil Uzi Vert — who brought a punk-rock sensibility to the mass scale of modern rap, especially in concert.

After a few high-profile guest appearances and two mixtapes released in 2013 and 2014, Mr. Scott’s first studio album, “Rodeo,” was released by Epic Records and the rapper T.I.’s Grand Hustle label in 2015. Just a year earlier, Mr. Scott was playing for tiny audiences. But following his proper debut, the musician began realizing his dreams of ambitious stage design and adrenaline to match.

In a 2015 GQ segment called “How to Rage With Travis Scott,” the rapper linked his childhood fantasy of becoming a professional wrestler to his later desire to make his concerts “feel like it was the WWF.”

“Raging and, you know, having fun and expressing good feelings is something that I plan on doing and spreading across the globe,” Mr. Scott said. “We don’t like people that just stand — whether you’re Black, white, brown, green, purple, yellow, blue, we don’t want you standing around.”

A concert review from Complex that year was titled, “I Tried Not to Die at Travi$ Scott and Young Thug’s Show Last Night,” calling the concert “the most dangerous safe haven” and “a turnt-up fight for survival.”

But as Mr. Scott’s diverse audience expanded and his operation professionalized, he also ran up against the limits of his amiable anarchy. At the Lollapalooza festival that summer in Chicago, the rapper’s set was cut off five minutes in, after he told fans to rush the barricades, flip off security and chant, “We want rage,” resulting in a stampede that injured a 15-year-old girl. Mr. Scott later pleaded guilty to reckless conduct and was put under court supervision for a year.

In 2017, Mr. Scott was arrested again following a performance in Arkansas, where he was charged with inciting a riot for encouraging fans to rush the stage and bypass security. He eventually pleaded guilty to a misdemeanor for disorderly conduct, and paid a $7,465.31 fine.

A superstar expands his influence

Mr. Scott’s celebrity soon skyrocketed. The same year as his arrest in Arkansas, he joined the extended Kardashian universe as the boyfriend of Kylie Jenner; the couple had a daughter, Stormi, in 2018 and are now expecting their second child.

But it was the release of Mr. Scott’s third album, “Astroworld,” in the summer of 2018, that cemented him among the upper echelon of superstar performers — and salesmen. The album release was paired with an extensive merchandise collection that drove purchases, and it helped lead to collaborations with McDonald’s, Hot Wheels, Nike, Reese’s and more.

“Astroworld” also featured the rapper’s first Billboard No. 1 single, “Sicko Mode,” with Drake, a feat Mr. Scott would repeat three more times from 2019 to 2020. He has collected eight Grammy nominations since 2013, released three chart-topping albums and is known as a streaming juggernaut.

After recreating rodeos and flying atop an animatronic bird over his crowds, Mr. Scott staged an international tour for “Astroworld” — named for a defunct Six Flags theme park near where he grew up — that featured a functional roller coaster that shot out over the audience.

Rolling Stone called it “the greatest show in the world,” comparing Mr. Scott’s “unhinged leaping” to Michael Jackson’s moonwalking, while The Washington Post crowned the rapper “one of the most electrifying performers of the moment,” a “maestro directing the chaos.”

Amid his big-budget diversification, Mr. Scott used his blockbuster release to kick off the festival of the same name, building on the industry trend of big-tent, weekend-long concerts branded and curated by major artists. (Astroworld was canceled in 2020 because of the Covid-19 pandemic; still, 28 million viewers watched Mr. Scott perform within the video game Fortnite.)

The Netflix documentary “Look Mom I Can Fly” chronicled the lead-up to the “Astroworld” album and the first edition of the festival. But even as it underlined Mr. Scott’s penchant for stoking hype — fast-forwarding through the empty crowds of his early career to the bedlam of Lollapalooza, Arkansas and his pyrotechnic-heavy arena shows in hectic, high-voltage footage — there were moments that gestured toward the need for caution, as well.

Mr. Scott is seen chastising security and egging his crowd on, but he is also shown multiple times pausing onstage as seemingly unconscious bodies are lifted through the crowd to be treated. “I feel bad, though,” he says following his release from jail in Arkansas. “I heard about kids getting hurt.”

Ahead of another show, a member of the rapper’s team is shown backstage, preparing the venue’s security staff.

“Our kids, they push up against the front and spread all the way across that and fill in the whole front floor, so the pressure becomes very great up against the barricade,” the man, whose face is blurred in the footage, tells them. “You will see a lot of crowd-surfers in general, but also you see a lot of kids that are just trying to get out and get to safety because they can’t breathe, because it’s so compact.”