“[Spanish-language] battle rap is snowballing in ways we never imagined,” muses Mexican hip-hop purveyor Serko Fu. Rolling Stone encountered the Master of Ceremonies earlier this month at the 12th installment of Batalla de los Gallos, the world’s biggest Hispanophone freestyle competition, located in Buenos Aires, Argentina. Founded in 2005, after the success of the Eminem-starring blockbuster 8 Mile, this year’s celebration arrives during a pivotal moment for the art of freestyle in Ibero-America, especially as Latin urbano music goes increasingly global. “It’s become a very cool movement that has surpassed all expectations, and now there are various generations entrenched in it,” says Serko Fu about batallas, or battles between freestylers, which initially derived from the slums and public parks of Latin America and Spain. The Durango native has been involved with Gallos since its inception, playing various roles such as judge, host, and cultural ambassador.

The annual event, sponsored by Red Bull, pulls together 16 of the illest, most brilliant improvisational wordsmiths of the Hispanosphere to compete for the best lyrical face-off. Held in Club Hípico — an equestrian field where gauchos have flaunted their horse-riding prowess for over a century — the rustic space is transformed into one massive throwdown, boasting over 10 thousand attendees and one million viewers tuning in via livestream. This year particularly sees one of the most intense cyphers as pundits witness the two most buzzed-about freestylers go toe-to-toe for a second year in a row.

“Vas a ser el ridículo, ¡cuando ni en tu propia casa no puedas quitarme el título!” ferociously spits Mexican veteran and reigning Batalla champion Aczino, against Argentine rapper Wos in this year’s final round: “You’re going to ridicule yourself, and even in your hometown you cannot take my title!” The fast-rising young gun Wos faces his opponent — the man who defeated him in Mexico City last year. This time, however, the tables have turned as the 20-year-old competes in his native Argentina — and he’s armed with a flow that’s charged with passion, resonating with his fellow Porteños in attendance. “Aunque pierda, esta gente se va a llenar de orgullo. Esa es la diferencia entre mi país y el tuyo,” Wos backlashes — and a seemingly omnipresent roar unleashes from the masses. “Even if I lose,” he shouts, “My people will fill up with pride. That’s the difference between my country and yours.” 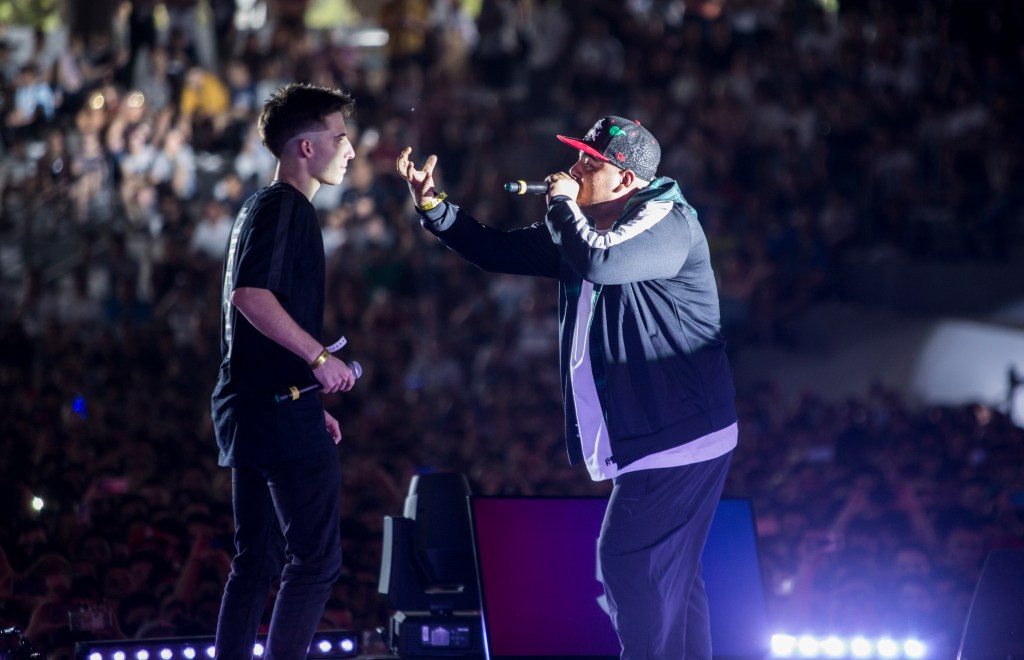 Reigning heavyweight champion MC Aczino and MC Wos face off during the final round of the 2018 Batalla.

Before the Batalla touched down on the cosmopolitan capital of Argentina, previous international duels took place in Mexico, Spain, Colombia, and Puerto Rico. “Although the movement wasn’t really established, the scene already existed in different parts of Latin America and Spain,” explains Serko Fu. Such was the case of the graffiti-adorned neighborhood of Ciudad Nezahualcóyotl (or Cd. Neza, as locals say), where Aczino is from. Born Mauricio Hernández González, the 27-year-old emcee is among the style’s pioneers. At 12 years old, he began consuming a strict diet of Iberoamerican hip-hop during its first big boom into the continent in the mid-Aughts.

“I began cultivating my music library buying bootleg hip-hop albums in my local flea market,” Aczino recalls. “Back then there wasn’t YouTube. Maybe you could download a song from Ares, but that would take like three days, and I didn’t have a computer. So I had to wait on an exact day of the week by that booth to buy my albums. One day I couldn’t find what to buy, I asked, ‘What’s new?” The seller said, ‘Here are these Batallas de Gallos that happened in Spain. They improvise in a battle, like in that movie 8 Mile with Eminem.’ I bought it, and that’s where I heard how real battles sounded like. From there I became hooked.”

“The release of 8 Mile brought battle rap to the mainstream everywhere,” affirms Serko Fu. “Red Bull was among the first brands that began to do things with hip-hop in Mexico. It started in local parks, and DJs spinned beats as rappers battled,” he describes. “With the arrival of the internet and YouTube, rap battle became an international craze.” With the globalization of the world wide web, the improvisational form reached unprecedented heights.

Valentín Oliva, who famously goes by Wos, came into the rap battle scene right at the cusp of the internet explosion, batallas’ second boom. He details the initiation of the movement in Parque Rivadavia in Buenos Aires: “There was this group that organized batallas in a plaza near my home, but events were rare and it wasn’t that massive. If there was a competition, 50 of us would show up at the most, and that was a good number.”

At 14 years old, Wos got his start at Quinto Escalón in 2012, the same year that competition launched. “When a video [of a battle] was uploaded, it would get around 10,000 YouTube views at the most. Two years passed and 2,000 people showed up at Quinto Escalón, with videos boasting over 20 million views on YouTube,” he says. As freestyle skyrocketed further with the help of the web, El Quinto Escalón became a youth-led phenomenon. “I stopped competing for three years, but when I returned in 2016, the movement had fully exploded,” Wos explains.

Before finalists enter the annual international battle, they first have to win their regional competition, and then the nationals. In the Red Bull Peruvian nationals, 26,000 people showed up in 2018, which is the largest yet in terms of attendance. “It was like a super mega concert,” describes the winner of that national competition, Jaze. “The number of people present that day might not even amount to a Das EFX or Nas concert, and I love those two. For this international, tickets sold out in the first two hours which is incredible. It has grown more between 2012 to 2016 than from 2005 to 2012,” he points out.

Today, the art form is increasingly being polished, and there is more complexity each time. Whether finalists have to flow acapella style using objects they pull from a mystery box, convince viewers behind a podium why they should be “elected” as best freestyler in campaign fashion, or flow using a series of random words thrown at you, it’s creating a lot of possibilities for this artistic discipline. “These are things that you never would’ve imagined in the first batallas. The formats that have been created along the way have now become universal to freestyle,” says Serko Fu.

Arkano, who won the international Batalla de los Gallos in 2015, and earned a Guinness World Record for freestyling for over 24 hours, believes that part of its success is because the platform enlists passionate experts and insiders of the rap scene. “The most important thing is that Red Bull is doing it without perverting the message, and without trying to change what freestyle is,” he offers. “They choose people as judges who are inside the hip-hop movement. I think that’s why it’s perceived with purity, and that’s why it’s been so successful.”

2018 was in fact a rematch of epic proportions; a battle that followed one year of intense anticipation as 2017’s Batalla saw the quick-witted Mexico dweller slay the Argentine rhymester through cut-throat wordplay. “¿Este es el que decían que era extraordinario?”/“This is the one they said was extraordinary?” spat the Mexican millennial at last year’s final round, before proceeding to attack the Gen Z rapper with an iGeneration diss. “Ratas digan lo que quieran en los comentarios. No pueden subir para defenderte al escenario,” he spits. “Trolls can say what they want in the comments. They can’t climb on stage to defend you.” 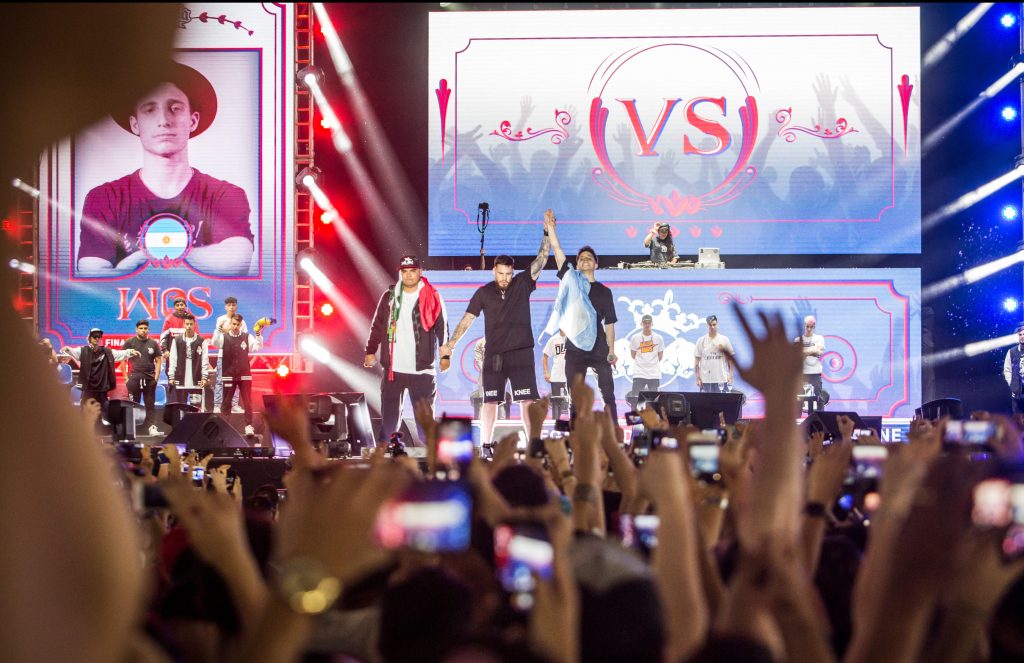 Aczino was just a hair away from breaking a record as two-time Gallos champion, before five judges ultimately granted Wos the international title. And though the audience showed their boundless support for their native champ, they also demonstrated mad respect for Aczino as they chanted his name in unison. “Ultimately, this is a sport. One day you can win, and the next day you can lose, and with the same person,” Aczino told Rolling Stone days prior to the final showdown. “Before, we didn’t know freestyle was like this. We used to think that if I won, I was better than you forever. Or if you won, you were better than me forever. But we each have our skill, and we each continue to evolve that skill.”

Batalla de los Gallos has made stars out of urban kids. It keeps pushing their linguistic prowess in unprecedented ways through new forms of entertainment — without them jeopardizing their creative essence, or running the risk of selling out. “We used to see ourselves less valued because of the issues of ‘I’m not charging because it’s a street battle,’ ‘How am I going to have a manager and contract?’ or, ‘How am I going to be with a brand?’ Red Bull has removed those stigmas because their approach is real,” says Aczino. “It’s not about taking advantage of a culture at its peak, or prostituting something that was already done. In fact, they’ve had to do a lot with its growth. They saw something with great potential and gave it the support it needed to become what it is today.”

All interviews were originally conducted in Spanish.