Backxwash: The Best of What’s Next – Paste – Paste Magazine 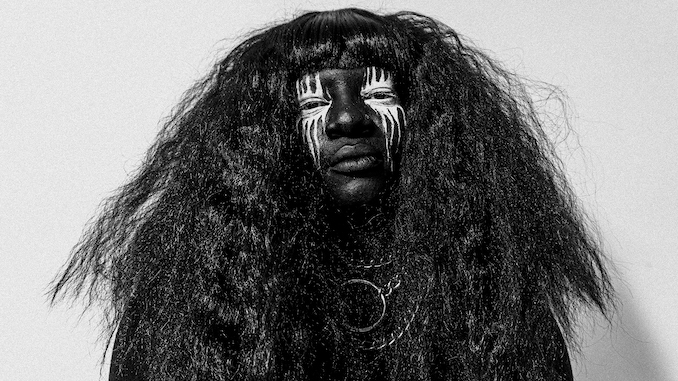 For years, Paste has introduced exciting, up-and-coming artists to our readers. This is the return of The Best of What’s Next, a monthly profile column which highlights new acts with big potential—the artists you’ll want to tell your friends about the minute you first hear their music. Explore them all here.

In the wake of traumatic events, the subject of music inevitably comes up. After the 2016 election, people waited expectantly for punk to make its triumphant return. Similar hopes were vocalized for hip-hop after the passing of George Floyd in 2020, which spurred worldwide protests. It’s easy to expect politics to be reflected in music, but what happens when someone’s very existence is political?

In October of 2019, Zambian-born, Canada-based rapper Backxwash wrote a tweet that said, “Next up we have backxwash a trans rapper did we mention that they are trans yes extremely trans so this trans rapper is gonna do some trans raps for us at this event,” several months before her 2020 album God Has Nothing To Do With This, Leave Him Out Of It brought her music to a wider audience than she ever anticipated. God Has Nothing To Do With This was heralded by many critics as a bold declaration of her transition, but as the rapper tells me over the phone, “it was an album about mental health in general.”

A year on since her earth-shattering studio debut, Backxwash, also known as Ashanti Mutinta, released her new album I Lie Here Buried With My Rings and My Dresses a week earlier than expected on June 20. It marks another chapter in the quickly expanding musical world of Backxwash that envisions life before colonialism’s effect on Africa, her identity and her culture while simultaneously grappling with the bleakness of life as we know it.

Mutinta’s musical journey was born out of pure fascination with music, influenced by not only African artists, but also the popularity of American hip-hop making its way overseas through music stores, file-sharing and her brother. When her brother’s friend brought home Fruity Loops 3, the production software of choice for the likes of 9th Wonder and Metro Boomin, the door to bigger possibilities cracked open. “I would stay on that thing every day just making beats. It didn’t matter if I was whack,” Mutinta recalls. It also quickly became a small source of income as neighborhood kids wanted beats to rap over.

Likewise, she also reflects fondly on the communities fostered in her home of Zambia, particularly the “lo-fi rap battles,” as she affectionately calls them. As at-home recording software became more widely available, so were amateur diss tracks recorded over found instrumentals that were traded back and forth at length. Mutinta also remembers frequenting Internet cafes to torrent music if she wasn’t trading USBs and CDs with local teenagers. Among those were Nas’ entire discography and Kanye West.

It is safe to call Mutinta a rap nerd, and her voice raises a bit when I bring up West. As a teenager, she remembers her perceptions of hip-hop changing upon listening to West’s 2004 debut The College Dropout. “Before that, you’re just rapping about how you’re the best rapper. Then, to have Kanye take you through this whole journey as a rapper and producer like me, it changed my life.”

Mutinta adopted West’s obsessive mentality in her own artistry, spending hours tinkering and recording until she developed her sound. Much like West and his short timeframes between his earlier albums, Mutinta also wasted no time in recording and releasing I Lie Here, which she says is inspired by her admiration for “people who have 10 albums that all sound different to each other, whether that be Kanye or Björk or Death Grips. I still got shit to say.”

At 17, armed with a wealth of music knowledge and a good grasp on production, Mutinta moved to Canada with her two siblings, where she found a home for her rage in the freedom of ciphers. However, her move to Canada was also marked by a five-year hiatus from creating music. 2018’s F.R.E.A.K.S was the world’s first proper introduction to Backxwash, self-described as being about “sexuality, gender identity, abuse, religion and intersectionality over glittery and dark sounds.” It sounds like Mutinta’s most “traditional” rap album, with her references to Rolls Royce’s Phantom model and hearty laugh ad-libs that float in the background. The same year saw the release of Black Sailor Moon, an album that leans heavily into trap production and aesthetics. It also features one of the best album intro tracks in memory:

“Deuteronomy 22:5 says:
A man shall not wear women’s clothes.
I’m reading this with a dress on.
I’m kind of like Jesus.”

This fascination with religion is an undercurrent present throughout all of Mutinta’s work as she slowly deconstructs and rebuilds the religious framework she grew up within. “I find fulfillment in the precolonial practices my tribe used to do, which I find works much better than what I was raised in. They don’t have power or merit in my life anymore, but the things I’m discovering from a precolonial lens holds much more power in what I do right now.”

Inspired by the intense guilt and shame brought upon by organized religion, God Has Nothing To Do With This was a middle finger to these oppressive institutions and the trauma inflicted upon Mutinta growing up and realizing her gender identity. In the song “Black Sheep,” Mutinta confronts a controlling figure in her life. “The basics of all this rage is complacent in where you stand / The awakening of a f*g and the making of a man,” slowly rises into a war cry over Mutinta’s sample of the Gule Wamkulu, which means “The Great Dance.” The ceremony, which is seen as a cornerstone of Nyau culture, features dancers representing various characters—often evil, such as slave traders—to teach the audience moral values. In many ways, Mutinta’s music serves a similar purpose in turning a mirror towards one’s internalized bigotry, forcing them to face the devastating consequences.

Despite the complexity of Mutinta’s sampling intertwined with her messages, it became easy to place her in a box as a “trans artist” and nothing more. “It was frustrating. If this was an album that came from a cis woman, I think people would have gone a bit deeper in terms of nuance,” she confesses. “I think it’s intellectually dishonest to just paint the album as being about that one particular identity. When you have a queer artist and you reduce everything to be about transition, that is disappointing.”

Hence the creation of I Lie Here, which picks up where Mutinta left off on the last track of God Has Nothing To Do With This, “Redemption,” imagining a timeline where she does not get that chance. “I just reached deep within the hardest moment of my life and instead of me fighting for a chance to survive, I’m just gonna lay there and die.”

Mutinta stares death in the face with a bloody grin as the industrial clang of the beat snarls underneath her. “Life expectancy’s expecting me,” she asserts on “IN THY HOLY NAME,” the peak in Mutinta’s hero’s journey down into her own demise as she calls out billionaires and politicians for their complacency in suffering. There are parallels to Nine Inch Nails’ The Downward Spiral, in which Trent Reznor creates his own unreliable narrator that succumbs to his hedonistic desires. However, Mutinta’s representation of her death is also plagued by guilt and regret as she wonders if there was more to be done. “I been tryna get some help / Stop this silence on my health / Think “confide in someone else” / Stop the violence on myself / Most the time I’m mostly blinded / Coz my pride is all I felt,” she spits on album closer “BURN TO ASHES.”

However, Mutinta has a growing army of supporters from around the world who have joined her on her journey to success, seeing her go from tweeting clipping. and Danny Brown, two of her biggest inspirations, to being recognized by them. clipping. even provided production on I Lie Here, creating the sparse technological wasteland on “BLOOD IN THE WATER.” Mutinta also credits her partner for helping her process the emotions of her sudden popularity, telling me: “It’s weird getting used to somebody who actually cares about what I have to say and what not. It took a while to get used to that.”

At the end of it all, that support is all Mutinta needs. All she asks is for a moment to sit with her music as it challenges the listener’s preconceived perceptions of religion, gender and sexuality. For a woman with so much to say lyrically, our conversation ends on a soft-spoken note. “Everything is coming into place. And it’s just, I guess, something to be happy about.”

Jade Gomez is Paste’s assistant music editor, dog mom, Southern rap aficionado and compound sentence enthusiast. She has no impulse control and will buy vinyl that she’s too afraid to play or stickers she will never stick.