Lossless audio seems to be the next significant advancement in music streaming. Amazon has been offering a high-quality plan since 2019, and in February, Spotify announced a new HiFi plan to launch later this year. Leave it to Apple to shake up the entire ecosystem with its announcement of lossless audio. Starting next month, all Apple Music subscribers will gain access to improved audio quality along with select Dolby Atmos tracks at no extra cost.

We already knew that a lossless tier was on the horizon for Apple Music, thanks to recent leaks from both iOS 14.6 and the latest beta version of the Android app. Launching it at no additional cost to subscribers, however, is an unexpected and game-changing move. More than 75 million songs will be available in lossless audio, which should cover nearly every song on the service. High-fidelity tracks will only be available to subscribers; you’re still limited to standard quality when purchasing songs or albums through the iTunes store. 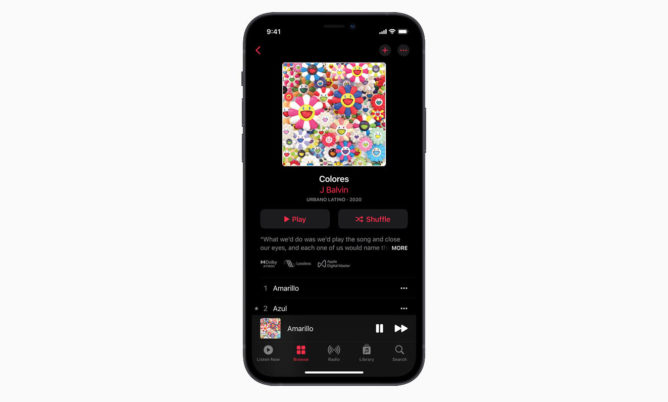 Because lossless audio requires higher data usage, all subscribers will have to enable the feature manually. Quality starts at 16-bit at 44.1kHz and goes as high as 24-bit at 48kHz. All Apple devices can play this quality natively, while most Android devices — especially flagships — should support playback without any issues using the internal DAC built into the SoC. A high-res lossless tier is also available, capable of streaming 24-bit at 192kHz, though you’ll need an external USB DAC to listen at that quality.

That said, you might run into some hiccups with hi-fi audio when listening wirelessly. According to a report from T3, Apple’s own AirPods Pro and AirPods Max won’t support Apple’s lossless codec (ALAC), because they only feature Bluetooth AAC. However, both Apple TV and HomePod can stream this quality, as can AirPlay speakers.

Apple is also adding Spatial Audio for Dolby Atmos to selected tracks, with rotating playlists highlighting supported songs. You’ll need to use headphones with Apple’s H1 or W1 chips or the built-in speakers on an iPhone, iPad, or Mac to listen, which supports last week’s leaks that Dolby Atmos wouldn’t be coming to the app on Android.

Apple’s move to bring lossless audio to all of its subscribers at no additional charge is already causing waves within the music streaming scene. Amazon’s HD plan was previously priced at $12.99 for Prime members and $14.99 for everyone else, but following this morning’s announcement, subscribers now have access to lossless audio for 70 million tracks at no additional cost.

Amazon is unlikely to be the only company forced to make major changes to current and future streaming plans. Though Spotify’s HiFi plan is still on track to arrive later this year, it won’t be easy to justify a new price tier to consumers now that Apple and Amazon both include high-quality audio for all subscribers. Tidal, meanwhile, has long used lossless audio and support for Dolby Atmos to set itself apart from the pack, but with Apple now including both features for half the monthly cost, the struggling music service is losing out on its central selling point.