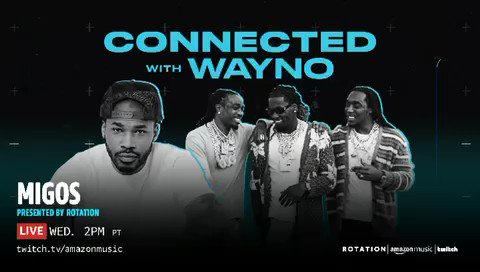 As sister companies, Amazon Music and Twitch have been exploring ways to work together for a while now, including livestreams within Amazon Music’s app, and the music service running its own channel on Twitch. It’s interesting, then, to see Amazon Music planning more programming for the latter channel.

Today it is debuting a new monthly show called ‘Connected with Wayno’, hosted by hip-hop veteran Wayno, who will be interviewing a series of luminaries from the hip-hop and R&B world, starting with Migos.

Amazon Music says the show will also include a section on emerging artists, and the show is billed as presented by ‘Rotation’, which is the streaming service’s global hip-hop brand. It’s the latest strand for the Amazon Music Twitch channel, which currently has 135,000 followers.