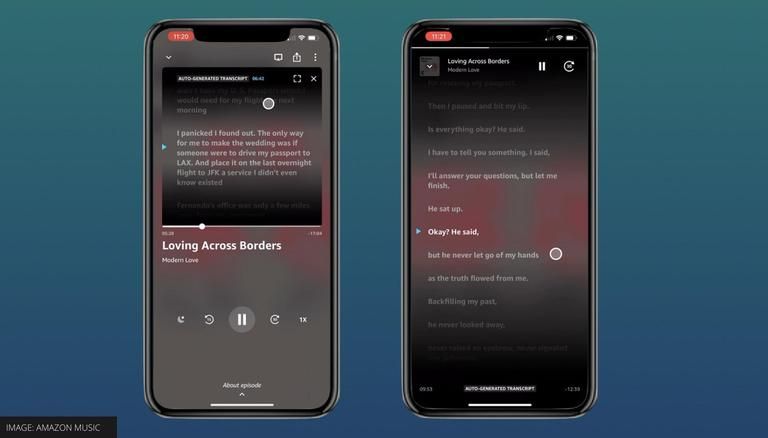 The music streaming platform run by Amazon, Amazon Music is now rolling out auto-generated transcripts that are synchronised with the audio. While the feature is being rolled out for users in the United States (both Android and iOS), it will be available for selected podcasts only. Amazon Music started featuring podcasts last year and the new feature is among the biggest update for the platform.

Upon the launch of auto-generated transcripts for Amazon Podcasts, General Manager, Podcasts at Amazon Kintan Brahmbhatt said, “Excited to innovate on behalf of customers with today’s launch of synchronized transcripts on Amazon Music. Check out the transcripts on popular podcasts – Smartless, Crimejunkie, 9/12, Uncommon Ground, modern Live and many more.” The statement was published as a tweet on 2 November 2021.

Introducing: Podcast Transcripts. Roll it back, jump ahead and follow along with synchronized transcripts and audio, only available on Amazon Music. Head to our podcast tab and select episodes with transcripts to check it out! pic.twitter.com/A5d0aA0rvJ

Amazon Music transcripts will be available to users in the US

As mentioned earlier, users in the United States will be able to read auto-generated podcasts. For it, users have to open the podcasts tab on Amazon Music, open one of the selected podcasts and episodes to read along. The transcription will be available on the top of album art as well as in full-screen mode. Auto-generated transcripts are already available on other platforms such as Google Podcasts and Spotify. Amazon Music has added this feature to strengthen its hold upon the users who regularly listen to podcasts as it has a growing userbase.

While there is no confirmation as to when the feature will arrive in India, the growing popularity of podcasts in the country and the success of audio-only platforms might attract the feature soon. Other platforms such as Spotify have already been working on auto-generated transcripts. Google Podcasts internally transcribes all the podcasts for better search functionality but does not allow users to read transcriptions along with the podcast. Another player in the market, Apple Podcasts does not have an auto-generated transcription solution yet.

Most recently, Amazon Prime, another content streaming service owned by Amazon announced a price hike in India. The new prices of Amazon Prime have become costlier by nearly 50%. Its monthly plan has been increased from Rs 129 to Rs 179, its quarterly prices from Rs. 329, to Rs. 459 and its annual rate from Rs. 999, to Rs. 1,499.