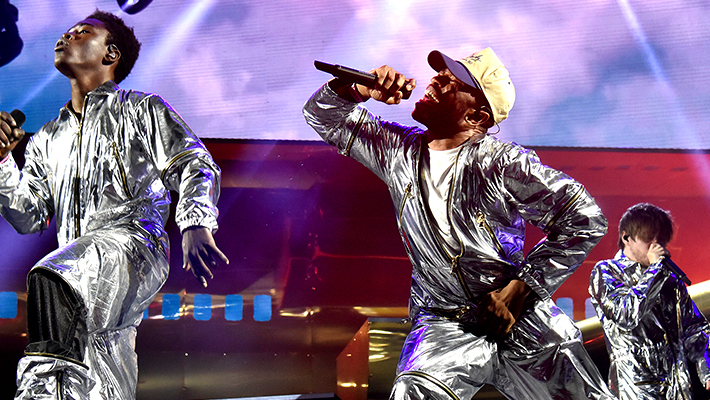 The best new hip-hop this week includes albums, videos, and songs from Brockhampton, CJ, and more.

The self-declared boy band called their latest release, Roadrunner, the first of two in 2021 and their penultimate release as a group. Meanwhile, Staten Island standout CJ capitalizes on the success of his breakout hit “Whoopty” with a deluxe version of his debut EP Loyalty Over Royalty. Lastly, Quality Control’s newest roster member Lakeyah brings the feminine energy this week to keep the wave of fresh voices in hip-hop building with a brand new full-length.

Friday saw the releases of Doja Cat’s “Kiss Me More,” Polo G’s “Rapstar,” and Saweetie turning in a show-stealing feature verse on Gwen Stefani’s “Slow Clap” along with the releases listed below.

After taking the world by storm with their Saturation trilogy and a pair of strong follow-ups, it seems Brockhampton feels they’ve run out of road. Their penultimate release is more personal and less chaotic than their previous ones, so how you’ll feel about it depends on what you wanted from the band in the first place.

Talk about striking while the iron is hot. Not only is CJ forging ahead with a deluxe version of his debut EP, including new single “Lil Freak,” but he’s also stoking the flames that generated the buzz around his name in the first place, centralizing his multiple “Whoopty” remixes and showing that he’s even more versatile than anyone could have thought when he kicked in the door.

Lakeyah — In Due Time

Less than a year after making her debut with Time’s Up, the Milwaukee-born Atlanta transplant follows up with another fresh collection of songs showing off her Swiss precision flow. This time, she’s revealing a bit more about herself while still retaining that boastful edge, bringing along veteran trap pioneer Gucci Mane and burgeoning talent Yung Bleu along for the ride.

The Dallas rapper — who met his untimely demise last year after being shot and killed on Interstate 35 — was building an impressive collection of independently released mixtapes that saw him garnering attention and co-signs from the likes of Boosie Badazz and Moneybagg Yo. His posthumous release includes features from Boosie, Foogiano, and YFN Lucci.

This is my Elder Millennial Nostalgia inclusion. Onyx hasn’t lost a step lyrically since their “Slam”-backed heyday, and while their gritty approach to menacing New York hip-hop has become less trendy, there’s still a granule of authenticity at the center of their threatening raps and a youthful glint to their delivery. It’s worth checking out, especially if DMX’s passing has you wondering where all the tough-guy rap has gone.

A New Jersey rapper with a gift for catchy hooks and an ear for hypnotic beats, Angelo is well-worth keeping an eye on.

Freddie’s latest is a glaring warning to enemies, with a trunk-ready beat and rapid-fire delivery from Freddie replete with detailed threats and boastful declarations of realness.

Captain Hook applies his gifts to a comparison between himself and a former lover’s new paramour.

Chi-Town vet lends some assistance to young Philadelphia upstart YXNG K.A on an upbeat track that sees them bragging with singsong flows.