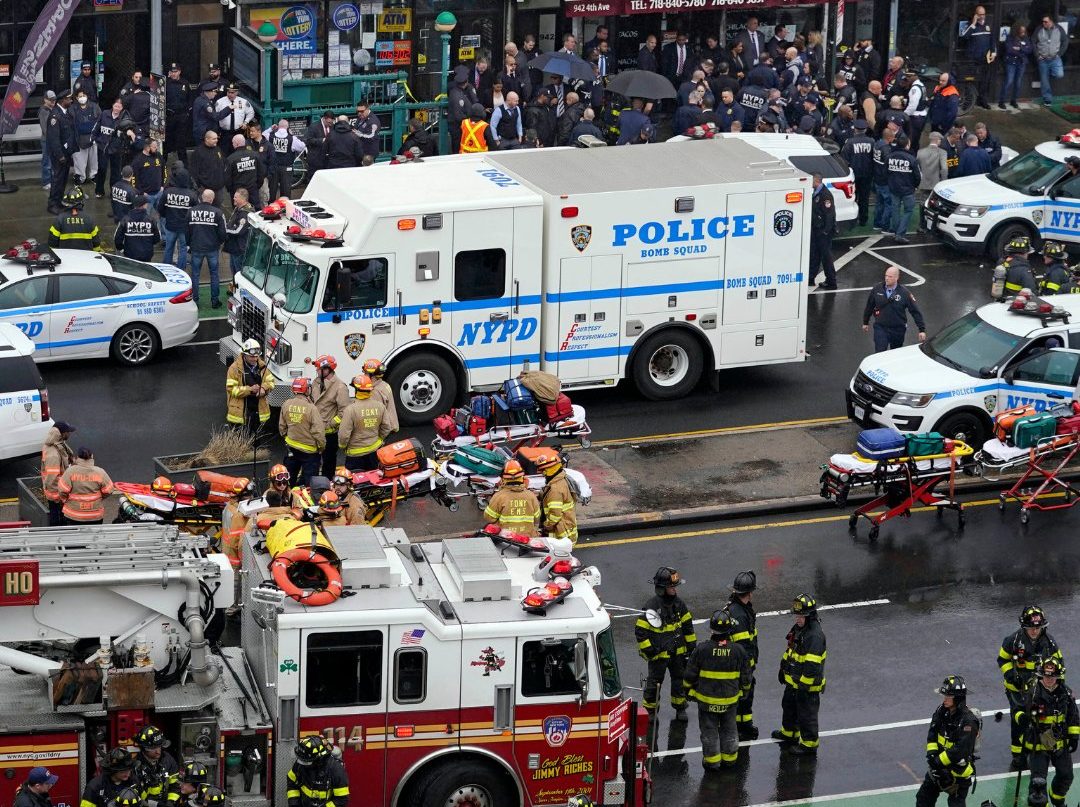 SUNSET PARK, Brooklyn —  Chaos has unfolded after a gunman opened fire on multiple subway stations along the northbound N train line in Brooklyn on Tuesday morning, shooting and injuring at least 13 people.

Police are looking for a gunman described as wearing a gas mask and an orange construction vest, according to ABC 7 NY.  Described as a Black man standing 5’5 and weighing 175 pounds, the suspect also allegedly threw smoke bombs.

While police later confirmed that four suspicious packages weren’t a threat, bullets and shrapnel from the Brooklyn subway shootings have wounded over a dozen people.

As early as 8:30 a.m., four victims were found at the 36 Street subway station in Sunset Park and another at the 25th Street station in Greenwood Heights.

The victims were taken to Maimonides Medical Center, Kings County Hospital, and others. Meanwhile, law enforcement agencies at every level from NYPD to U.S. Attorney General Merrick Garland remain on high alert.

Multiple people shot at 36 street station by two people in #sunsetpark. All are currently being transported to the hospital #NewYork #Brooklyn pic.twitter.com/3Va2iXf0JQ

The FBI says it is assisting NYPD in the manhunt, and hasn’t yet determined whether the attacks were related to terrorism or some other motive. Mayor Eric Adams, who recently tested positive for COVID, has been monitoring the situation from City Hall. Governor Kathy Hochul has also been briefed.

I have been briefed on this developing situation in Brooklyn. First responders are on the scene and we will work with @MTA & @NYPDnews to provide updates as the investigation continues. https://t.co/dM2hKnhoql

Mayor Eric Adams, the second Black person to ever become mayor of NYC, has campaigned on cracking down on violent crime in the city. He’s condemned the shootings of police officers and met with drill rappers to address gang violence. Yet NYC began the year with a 35% higher crime rate than the same time in 2021,  according to data from NYPD. The crime rate further complicates attempts to address the violence in the nation’s largest liberal city.

No arrests have thus far been made in the Brooklyn subway shooting, and schools in the surrounding area remain on lockdown as the search continues.