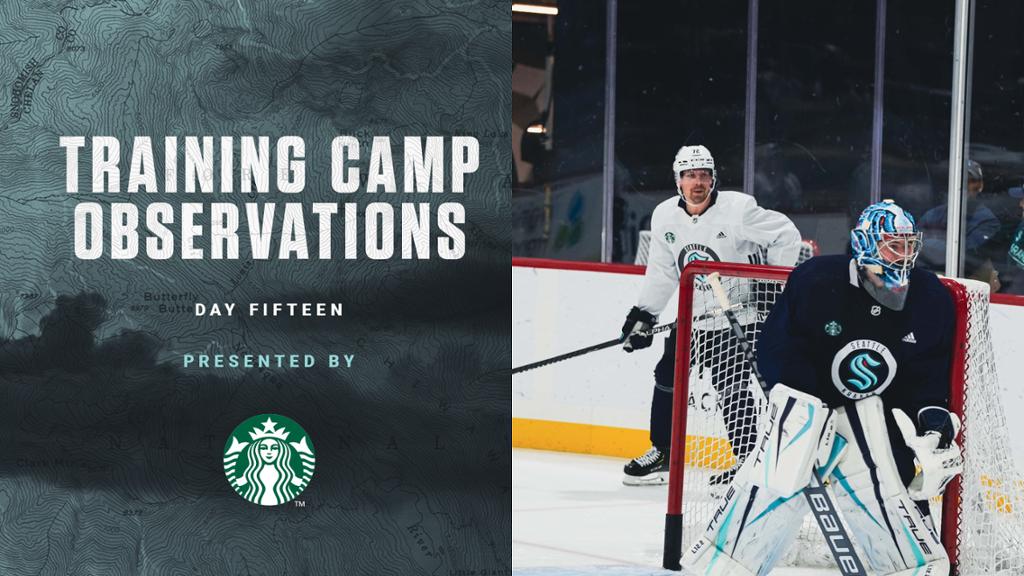 Then there was work on the forecheck.

During the six preseason games the Kraken had some success on their forecheck, and when they did the game results were positive. They’ve been aggressive, often sending two forwards in deep after the puck in the opponent’s zone.

When the forecheck is on, Seattle has created turnovers, havoc, and generally disrupted their opponent’s ability to move the puck up ice. Thursday’s drills reflected that as three forwards would attempt to dig out pucks from two defensemen.

“Today we worked on a lot of the fundamentals,” Seattle coach Dave Hakstol said. “Just good strong fundamentals with [Forward One] and [Forward two] doing their job. And then looking for the payoff on that forecheck as well. That’s a big part of forechecking, getting the puck back and having an opportunity to score so that was a piece of our practice today.”

Gourde took part in practice on Thursday and again was not wearing a red jersey. He centered a line with Morgan Geekie on one wing and Mason Appleton on the other. It was the first time that Gourde had played with Geekie in camp.

“He can see the ice really well and he’s got a great shot,” Gourde said. “He’s a big boy out there. I’ve played against him a lot last year, obviously, so I know him and he’s a great player.”

When Gourde took off the red no-contact jersey earlier in the week he mentioned that he wasn’t cleared to play yet but that his teammates were being too careful with him. He wanted to get some bumps in and test out his shoulder that was operated on this summer.

“We’re back to normal and I appreciate that,” Gourde said. “It’s part of my game and good being in a regular jersey and getting bumps and also pushing guys off and using that arm. Basically, doing everything that I usually do. So, it’s good.”

Getting to know each other off the ice

On the ice, Jared McCann and his line with Jordan Eberle and Jaden Schwartz have been gelling.

That top line see each other well during play, make great passes to each other, and seem to read the plays in the same way. McCann didn’t really know the other two that well before arriving in Seattle.

“Ebs is a big country music guy,” McCann said. “He’s a big country guy. We ride together and he didn’t really like my rap music he was getting so I gotta figure out something else.”

Philipp Grubauer and Chris Driedger were the only two goalies at practice Thursday as Hakstol confirmed that Joey Daccord had been reassigned to Charlotte of the American Hockey League. Seattle selected Daccord from the Ottawa Senators during the July 21 NHL Expansion Draft and the 25-year-old turned in strong camp.

Calle Jarnkrok was absent from the ice Thursday and Hakstol said the winger was out with an illness.

Goalie Philipp Grubauer is coming off a strong performance in Vancouver when he made 38 saves and earned a 4-0 shutout against the Canucks. He looked comfortable in the crease and dialed in.

He now has a week before a probable opening night start and happy for the time off in between games.

“I mean six games, maybe almost every second game you’re getting some action,” Grubauer said. “Obviously the last one was a little bit more action than I think we’ve gotten in all three games combined. But we get a little rest and a little time to work on stuff and we can analyze a couple clips. I don’t think it’s a bad thing.”

Another hard practice day ahead

The Kraken will be back on the ice Friday for another key workout to prepare for next week’s regular season start.

“[We] will slowly taper off,” Hakstol said. “Over the next few days as you get to regular season the luxury of a 60-minute practice usually isn’t there. We had a great practice today. Awesome work ethic, good detail, a really good life out there so, was a good day.”