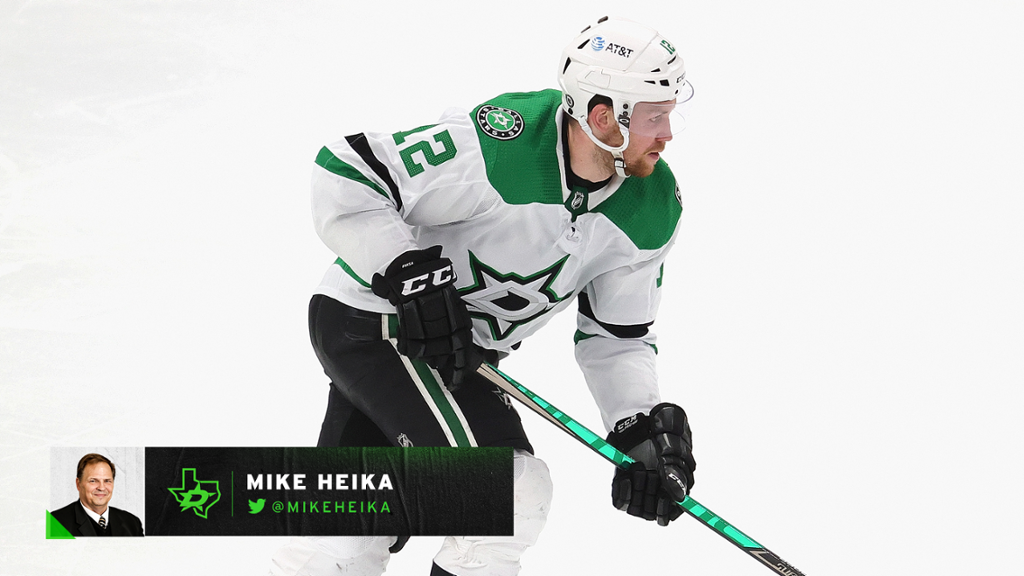 The Stars weren’t close to 100 percent healthy last season, and Radek Faksa is a great example.

The gritty center was bothered by a broken wrist that he suffered during the 2020 playoffs, and he just tried to battle through it. Faksa missed the Stanley Cup Final because of the injury, but doctors told him surgery might be complicated, so he fought through and tried his best.

“They said once they open it, I can have problems, and it’s better to just heal,” he said. “I don’t know if it was better or not. It was a tough season.”

Faksa struggled throughout. He played 55 of 56 games, but he tallied just 14 points and he wasn’t near as effective either on the power play or in his normal checking role. He said there was numbness at times that made it difficult to shoot the puck.

“When I shot, it just shut down and was super weak,” the left-handed shooter said of his left wrist. “Or in some battles, it would just shut off for five minutes and I couldn’t even move the wrist. It was painful, yeah.”

Still, he said he wanted to push through, so he did. But after again studying the potential for surgery, Faksa said he committed himself to a hard rehab plan. He and his fiancé Dominika were going to stay in Texas for the birth of their son Elliott on July 31, so it was easy to really dig in with his off-ice work. He used acupuncture, he wore a brace for three sessions a day to build strength and flexibility and he saw a hand doctor twice a week. And now, he said, he feels much better.

“I was doing summer training with [Stars strength and conditioning coach Brad Jellis], in the gym and on the ice,” Faksa said. “I was here the whole summer. I didn’t miss any days. When the baby was born, I missed a couple of days, but otherwise I was here every day.”

Faksa said because there were teammates and other NHL players like Seth Jones, Blake Coleman and Jordie Benn in Frisco, he started skating earlier than normal and lost a few pounds. He said he feels fresh when he’s on the ice. He added that he also feels fresh because of his role as a father.

He gives Dominika a lot of credit for allowing him to train and sleep, and said he really does feel great.

“I’m happy I stayed in Dallas,” he said. “I’m having more fun on the ice when I can shoot and do more stuff. I can’t wait for the season.”

Faksa played his first preseason game Friday, logged 18:11 in time on ice, and won 10-of-17 faceoffs. He had two shots on goal in a 6-3 loss to the Florida Panthers, but then scored in the optional shootout after the game. Stars head coach Rick Bowness says he expects Faksa will help add to the offense.

“He had a tough time, for sure,” Bowness said. “He’s in great shape, he’s been here all summer. He’s lost some weight, and his hands are strong again. He should be able to put up more points.”

He said he’d like to get back into that range again even if he doesn’t get the power-play time he once did and his line might be more of a “fourth” line than a “third” line this year. Faksa is expected to line up next to Blake Comeau and Luke Glendening while Jamie Benn centers the “third” line. Bowness warns that minutes played will determine what you call each line, and that the Stars could be more balanced than ever, but it seems Faksa will have to make the most of his opportunities this season.

Of course, that’s something he believes he’s equipped to do.

Notes: The Stars dropped to 0-1-2 in the preseason with a 6-3 loss at Florida…Denis Gurianov had two goals and an assist, while Jason Robertson had a goal and an assist…Anton Khudobin started in net and allowed five goals on 35 shots…The Stars were outshot 36-28…Dallas plays Arizona at El Paso on Sunday.

This story was not subject to the approval of the National Hockey League or Dallas Stars Hockey Club.

Mike Heika is a Senior Staff Writer for DallasStars.com and has covered the Stars since 1994. Follow him on Twitter @MikeHeika, and listen to his podcast.