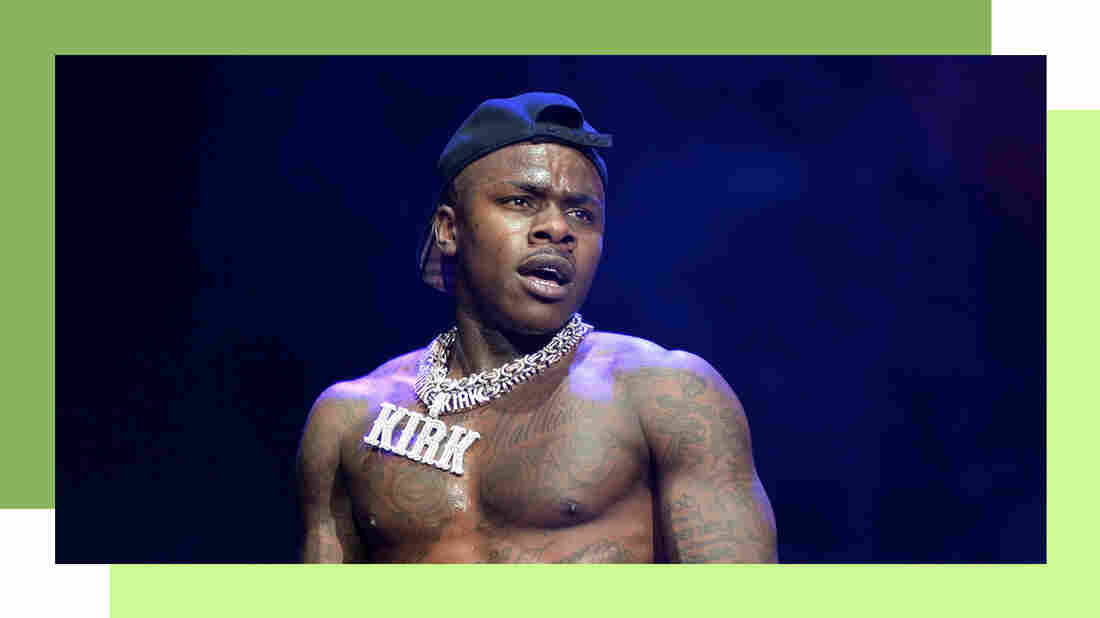 By the time DaBaby’s second album, Kirk, debuted at No. 1 this fall, the North Carolina rapper was already on his way to supernova status thanks to his first album, Baby on Baby, released just six months earlier. There was something special about him: funny, personable, entertaining in a way you couldn’t contain in a frame. What really struck a chord, though, was that he was a traditionalist — rapping and enunciating in line with the form as it sounded two or three decades ago. DaBaby blew up this year because he was different in the context of his moment, the latest breath of fresh air in a genre that has always moved in cycles.

In the last decade, blogs lost their sway and social media chipped away at regional walls, allowing rap music to stretch and unhinge. Language loosened, flows got weirder. Future and Young Thug practically birthed an entire subgenre of melodic trap, whose sounds crept into EDM, R&B, even country. A 16-year-old on house arrest who recorded as Chief Keef chanted and sputtered anxiously on beats that towered over the Chicago skyline, leading the charge of drill music and becoming the reference point for a wave of underground rappers who thrived on SoundCloud, then the Top 40.

But coming after a near-decade of unbridled innovation on the genre, 2019 felt like a tightening of the reins, a formalist respite before the next sweeping shifts in form. The year’s most buzzing rapper went back to basics — rapping with a clarity and precision that could bridge the old guard and younger generations — and others similarly indebted to traditionalism found success in their own lanes. Here are some of the best. —Mano Sundaresan

First of all, Megan Thee Stallion has been rapping circles around most of this year’s top-streamed rap acts. But on Fever, the Houston hot girl’s 2019 mixtape, Meg pushed herself into overdrive. From “Simon Says” featuring Juicy J to “Running Up Freestyle” to the platinum-selling “Cash S***” featuring DaBaby, Meg revels in each crude turn of phrase with a smirk that comes off endearing rather than smug. Vivid, explicit and surprisingly versatile, the real power in Meg’s bars is delivery — expeditious yet clear, with just the right amount of bounce, sass and wit. The best part? It’s clear Stalli is still warming up. —Sidney Madden

It’s been documented, but not enough: Over the last decade, Los Angeles has had a rap renaissance. While scene innovators like Drakeo The Ruler, the Stinc Team and 03 Greedo were derailed by a slew of criminal charges in 2019, others within the vanguard made their cases. Inglewood’s Rucci, who built a local following through a run of mixtapes, both solo and with the now-deceased Sean Mackk, released his debut album Tako’s Son, his most compelling, high-stakes work to date.

On the spectrum of the new Los Angeles, Rucci sits closest to classicism, capturing the spirit of greats like Suga Free and Mack 10. But don’t mistake that homage for predictability: Rucci consumes these beats. His presence throughout this album is glowing, outsized, and even within the frames of L.A. bump — minor keys, minimal bass — he makes daring production choices. (“Lowrider” interpolates, you know, that song). But beneath the booming production and drug inventories that run rampant on Tako’s Son are stories of deep loss and chosen family. —Mano Sundaresan

Little Simz has already outgrown her name. On her third studio album, the U.K. MC returns with a vengeance and in full command of her voice. Having surpassed the coming-of-age trope presented on her last outing, Stillness in Neverland, she raps with the self-assured confidence of a vet. But questions linger: The real GREY Area here isn’t hers, but the world’s, as she finds herself in contention with conventional wisdom. There are some things she just isn’t ready to concede — be it her mind (“Therapy”) or her heart (“Sherbet Sunset”) — especially if the world can’t acknowledge her undeniable “Venom” on the mic or the inescapable “Pressure” she’s inherited by birth. She’s a force the status quo will have to reckon with. —Rodney Carmichael

Like most of hip-hop’s hood stenographers, Maxo Kream has walked the tightrope between respected and underrated for years now. What’s different about Brandon Banks, Maxo’s major label debut, is that this time his formidable bars come with a larger sociological context that hits close to home.

Using his father’s criminal alias as the album’s namesake, the Houston-hailing baritone recounts his cycle of failing into the same life that took his father away from him. Maxo even brings in his father’s voice many times throughout the 15-track run to remind listeners his languid musings are part of something larger: the sordid, self-fulfilling prophecy of getting caught up in family business. —Sidney Madden

DaBaby was 2019’s proverbial record scratch in hip-hop: Once word spread through social media and the nightclubs, he was inescapable. Schticky visuals helped reel listeners in, but the subject matter and delivery of Baby on Baby are nothing to joke about. While MCs like Jay-Z and Lil Wayne opt to let the beat build and breathe, DaBaby’s relentless approach to a track puts vocals first, letting the music sound like it was built in the space around him.

In an interview with The Breakfast Club, he spoke on his respect for words and the English language, a trait instilled in him by his late father. With Baby on Baby, the Charlotte, N.C. native honors these lessons: clear and concise, taking no bars off. A few songs aside, the formula is simple: hard beats and raps under three minutes long and it’s on to the next. It’s a tried a true method that’ll never go stale. —Bobby Carter

We could easily have filled this list with Detroit rap: For years, the city has been producing larger-than-life personalities whose bread and butter is breakneck tough-talk. In 2019, those characters finally burst out of the Motor City bubble, giving the scene its well-deserved moment. There were the scam masterminds Teejayx6 and Kasher Quon, who shared their feats of internet hustling, clipping the tails of each other’s lines like lunch-table freestylers. There was Sada Baby, the burgeoning star who parlayed the success of his 2018 hit “Bloxk Party” into the thrilling mixtape Bartier Bounty. There were scene veterans like BandGang, FMB DZ and Drego & Beno, who flooded YouTube with punishing two-step music.

And then, a few clicks away from any Detroit rap video on YouTube, there were the Sh***yBoyz, a trio of designer-draped teens obsessed with ’80s electro, chintzy freestyle music and rapping like every studio session is a race against time before Mom gets home. Their posse cuts are great, but you’re really there for BabyTron, the scrawny member with the Drake Bell haircut and sinister monotone. His debut album Bin Reaper has the aesthetic of a vintage exercise video, pacing of an AAU highlight tape, and writing of a punchline wizard. —Mano Sundaresan

The year’s most anticipated hip-hop album delivered in spades. After a multitude of setbacks and false starts, Freddie Gibbs and Madlib’s follow-up to 2014’s Piñata picks up where the pair left off: dusty, obscure sample chops and quirky interludes fused with the grimiest street tales on wax. The album follows the same structure as its predecessor, and in this case, more of the same is welcome: Gibbs is without a doubt doing the best rapping his career, going bar for bar with the likes of Black Thought, Pusha T and Yasiin Bey. He holds his own with each feature and, in some cases, outshines.

In hip-hop, we tend to laud a rapper’s evolution — the storied trajectory is from street life to business and family life. But as long as Hollywood is rooting for Robert De Niro as a mob hitman in The Irishman, I’m still here for hardcore rap. —Bobby Carter

The Plugs I Met

The mercury drops low in Buffalo, N.Y., and Benny the Butcher embodies every frigid degree. His Griselda Gang — named for the cocaine godmother of the Medellín cartel — has stoked nostalgia for two things suspected of passing away: the crack era and the lyrical rap era. On The Plugs I Met, Benny connects with heavyweights well-versed in both (Black Thought, Jadakiss, Pusha T). It’s as if time froze in Buffalo, too, and the hard knocks never stopped. But these aren’t throwback raps — in fact, they cut so deep they’ve elevated lyricism in street music again. The trap may never be the same. —Rodney Carmichael

In an era where women are running this rap ish, Rapsody puts black women front and center on Eve. Every song is named after a goddess — whether real or imaginary, historical or contemporary — who embodies the struggles, the successes and the systemic BS black women the world over have fought. It’s a concept that works largely because it’s applied in a literary sense rather than a literal one: A queen of similes and metaphors, Rapsody makes “Nina” the symbol for collective perseverance, “Oprah” the model for cooperative economics, “Afeni” the proxy for Pac’s “Dear Mama” lessons. It’s an epic homage to the original woman. —Rodney Carmichael

The entry point for many was Some Rap Songs, Earl Sweatshirt’s somber collage of mumbly streams and low-bit-rate splashes from the tail end of last year. That album saw Earl leaning into the cadences, production style and shadowy ethos of a network of young rappers that includes MIKE, Medhane, and Navy Blue. The influences run in a feedback loop: Nearly all of those rappers cite Earl as an inspiration, but they’ve molded his dense rapping and subject matter into a slow, submerged sound that is distinctly their own.

In 2019, off the strength of the Earl cosign, some of them garnered acclaim and set themselves apart as singular talents — chief among them a North Carolina native studying at Howard University who raps under the alias MAVI. His debut album, Let the Sun Talk, is split into three acts that lurch and jerk under the weight of heavy soul samples, but like others from this wave it is made to be consumed in one sitting (he initially uploaded it to SoundCloud as a single 32-minute track). Rapped in plain, beautiful language that occasionally tumbles into melody, the album is a manifesto of black self-love and freedom. —Mano Sundaresan